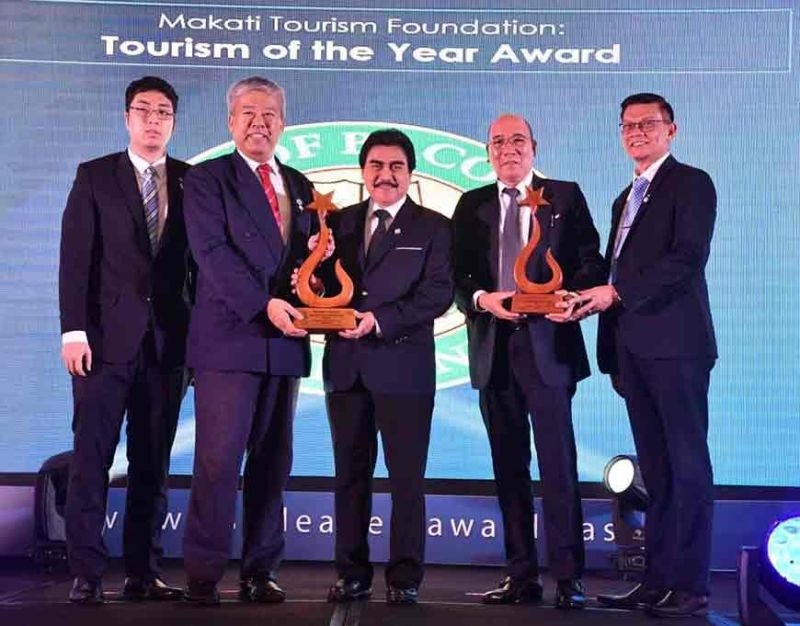 Mayor Evelio Leonardia (3rd from left), accompanied by Vice Mayor El Cid Familiaran and Councilor Renecito Novero, accepts the trophy for Tourism Award of the Year for Bacolod City, presented by the Makati Tourism Foundation, represented by Secretary-General Tan Yu III, with Dr. Elton See Tan of the Federation of Filipino-Chinese Chambers of Commerce and Industry, at the Asia Leaders Awards 2019 at the Makati Shangri-La Hotel in Manila Tuesday, November 19. (City PIO)

THE Bacolod City Government received the Tourism Award of the Year at the Asia Leaders Awards 2019, dubbed “Global Excellence,” at the Makati Shangri-La Hotel in Manila Tuesday [Nov. 19].

Bacolod City was chosen for its “wonderful festivals” that make it the “real brand ambassador of the Philippines” in promoting the country globally as a premier tourism hub.

The tourism award was presented by the Makati Tourism Foundation, Inc.

Last year, Bacolod City was also a finalist in the Tourism Award of the Year.

Leonardia said, “We are the city with the distinction as having the most number of major festivals. This was made possible because of our people’s support, cooperation, and acceptance. Bacolod is a natural habitat of festivals.”

The MassKara Festival dancers were the first Filipino group to perform in Disneyland and also the first mask-based festival in the world to do so.

The MassKara dancers performed a dance number at the Disneyland Performing Arts at the California Adventure Land last August as part of the Bacolod City Trade and Tourism Mission to USA 2019.

Before their performance in Disneyland, the MassKara dancers had also performed at the San Francisco Filipino Cultural Center in San Francisco, California.

They also performed at the Gala Night of the “MassKara Festival in Long Beach” at the Marriott Hotel in Long Beach City, and at the Bandshell at the Recreation Park in Long Beach.

They also performed at the Trade, Travel and Consumer Expo at the SouthBay Pavilion in Carson City.

The MassKara Festival dancers had also performed in three cities of South Korea and earned awards for their outstanding performances.

They bagged a bronze medal at the World Mask Dance Competition in 2018 in Andong City, where they competed against 12 other international mask dance teams.

They were hailed champion in the best foreign group category, besting 21 other foreign countries, at the 2019 Daegu Colorful Festival in Daegu City.

The MassKara Festival was the only foreign team invited to perform at the Maduhee Festival in June 2019, the first time in its 320-year history.

This month, Bacolod City hosted the 7th IMACO International Conference, with more than 200 delegates from 17 countries. IMACO stands for International Mask Arts and Culture Organization with members from 63 countries that have mask-based festivals. (PR)