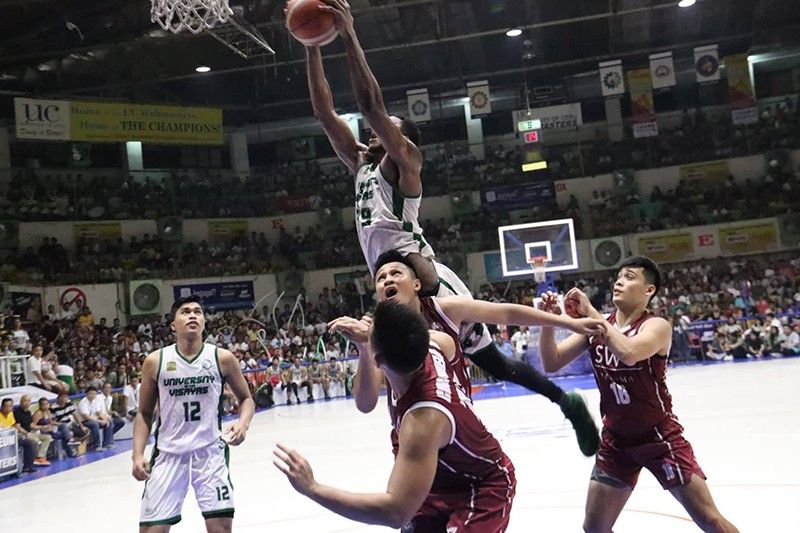 CEBU. UV's Lass Coulibally was a huge factor in UV's Game Two victory, piling up 13 points and 21 rebounds. Can he do it all over again in Game Three? (Photo by Amper Campaña)

CAN the reigning three-time champions University of the Visayas (UV) Green Lancers buck the odds once again and hoist a fourth straight title? Or will the Southwestern University (SWU)-Phinma Cobras rise to the occasion and end their five-year championship drought?

It all comes to a hilt on Friday evening, November 22, 2019 as the UV and SWU-Phinma clash one last time for all the marbles in Game Three of the Cebu Schools Athletic Foundation Inc. (Cesafi) men’s basketball tournament at what is expected to be a packed Cebu Coliseum.

The proud Green Lancers sent the finals to the winner-take-all Game Three after it routed the Cobras, 73-59, in Game Two on Thursday night.

Now, less than 24 hours after that grueling battle, the two squads go at it one final time this season, with the players hoping to etch their names in the annals of the league as champions of 2019.

Asked what adjustments he would like his team to make, SWU-Phinma head coach Mike Reyes emphatically said there is not much to do. But he is hoping to have his star forward from Senegal, Lamine Thiam, stay out of foul trouble.

“We have been playing with Lamine for six months. This is the first time he got two fouls in the first three minutes of the game,” said Reyes.

That development proved to be a crucial one especially when Thiam picked up his fourth foul with 3:19 left in the third. That happened when the Cobras were in the midst of a 14-4 run that cut UV’s 13-point lead down to one, 38-39.

But with Thiam sitting on the bench, UV’s frontline quickly took advantage as Lass Coulibally and Monic Soliva punctured SWU-Phinma’s defense to help the Green Lancers pull away.

Although momentum is on their side, UV head coach Gary Cortes said that Game Three is a toss-up.

“Game Three is anybody’s ball game,” said the many-time champion head coach. “We just have to double our effort on defense and improve our decision making.”