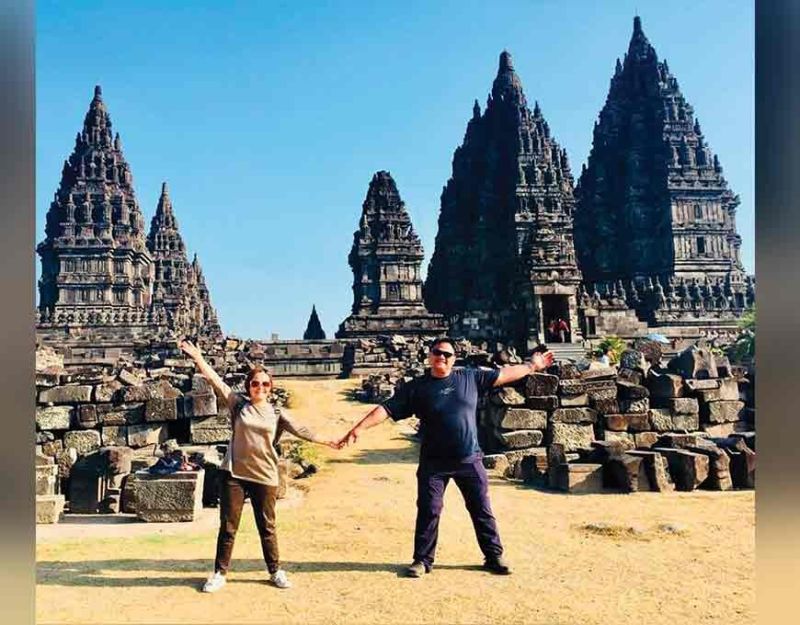 Tintin and Shem were happy to have covered a wide area of temples in Prambanan. (Photo by Debb Bautista) 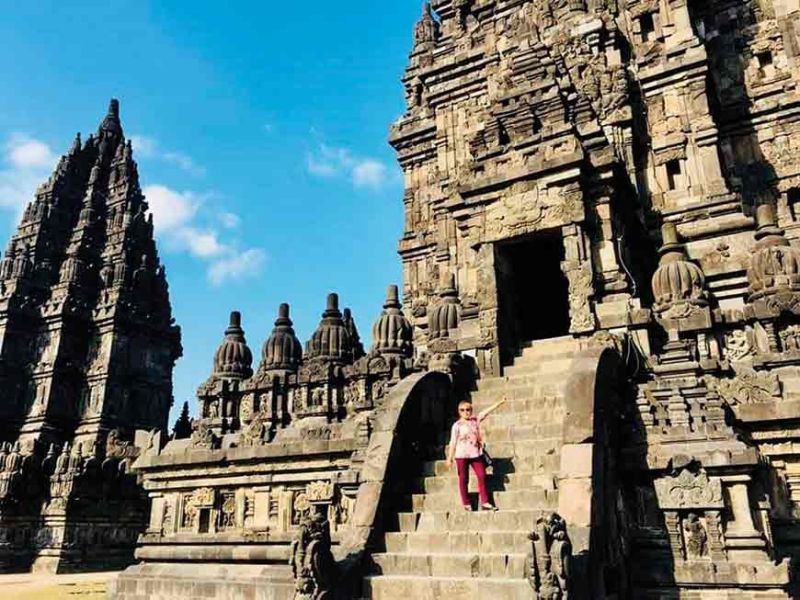 The Temple of Prambanan are architectural marvels, with the unique advantage of being huge as well as intricate. (Photo by Debb Bautista) 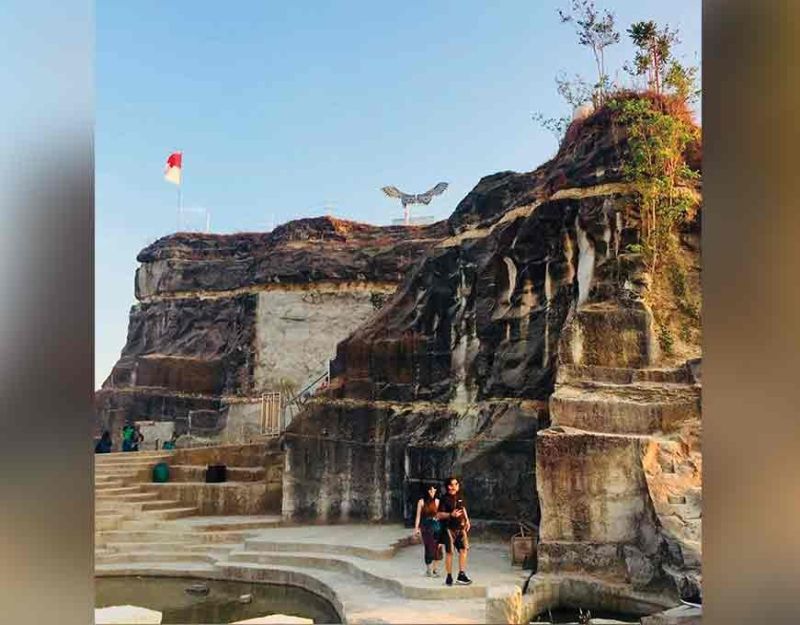 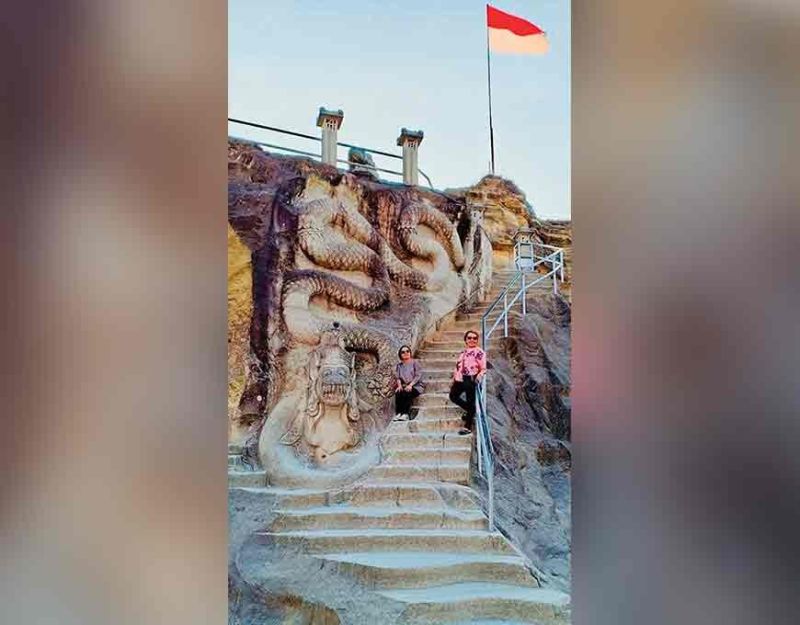 Standing before a carving depicting a dragon and its crown at Tebing Breksi are: Shem, Tintin, and the author. (Photo by Debb Bautista) 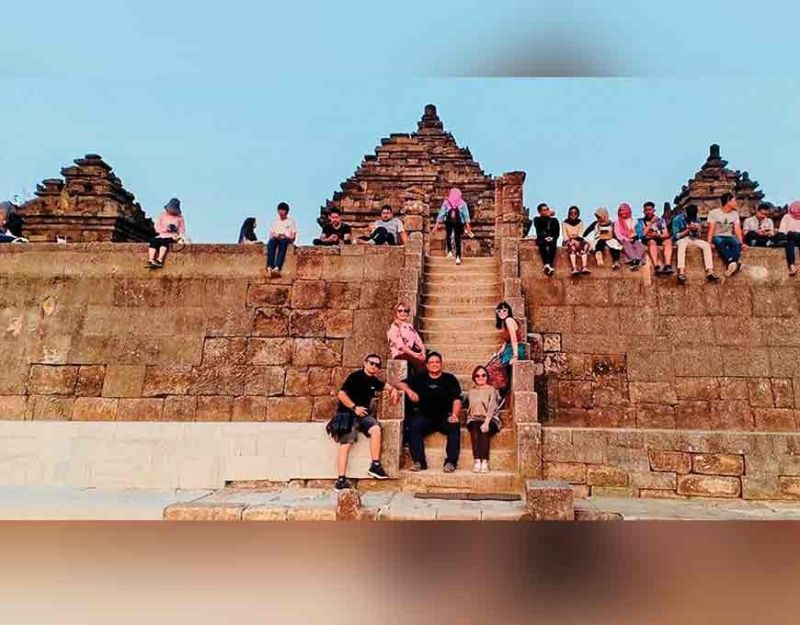 Pausing before reaching the top terrace of Ijo Temple are: Peterey, the author, Shem, Tintin, and Anne Drew. (Photo by Debb Bautista) 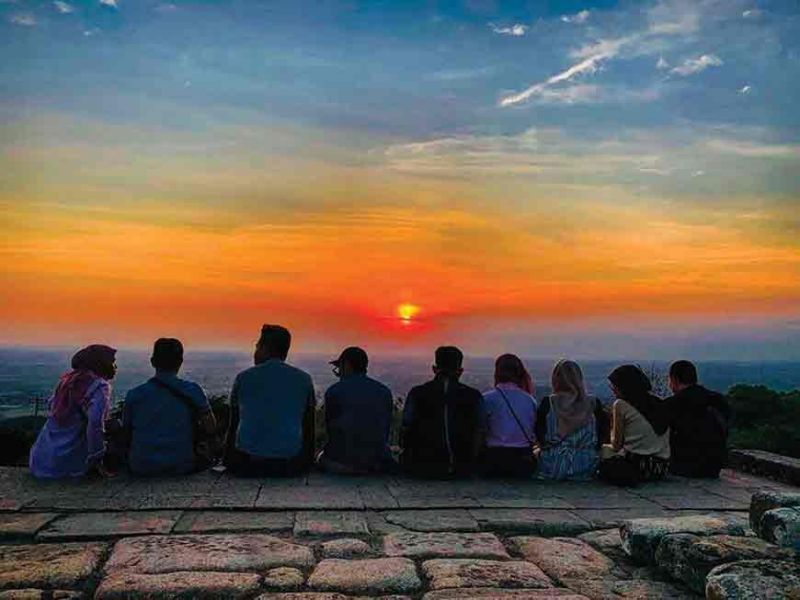 We witnessed a great and amazing sunset at the top of Ijo Temple. (Photo by Debb Bautista) 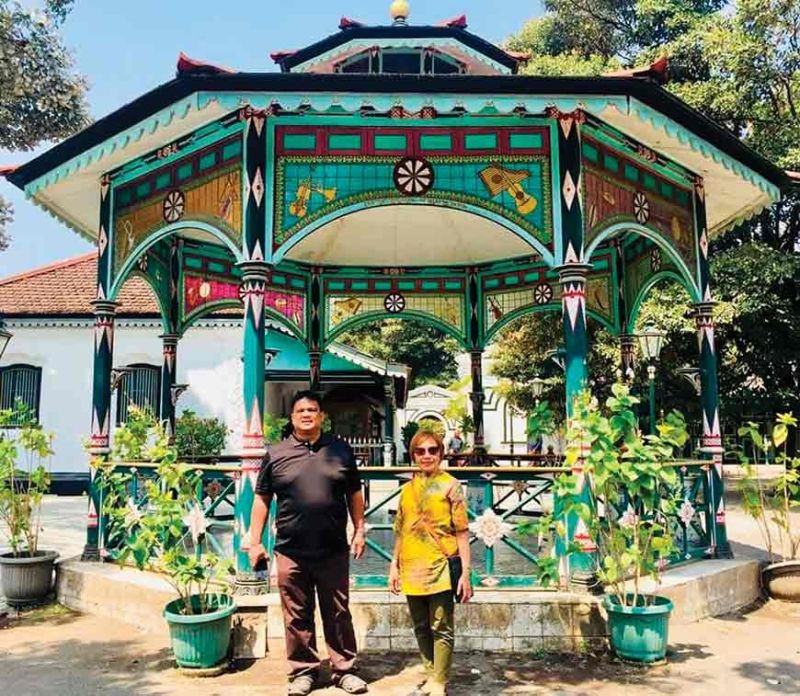 Shem and the author stood by the Dutch-inspired pavilion at the Royal Sultan Palace. (Photo by Debb Bautista) 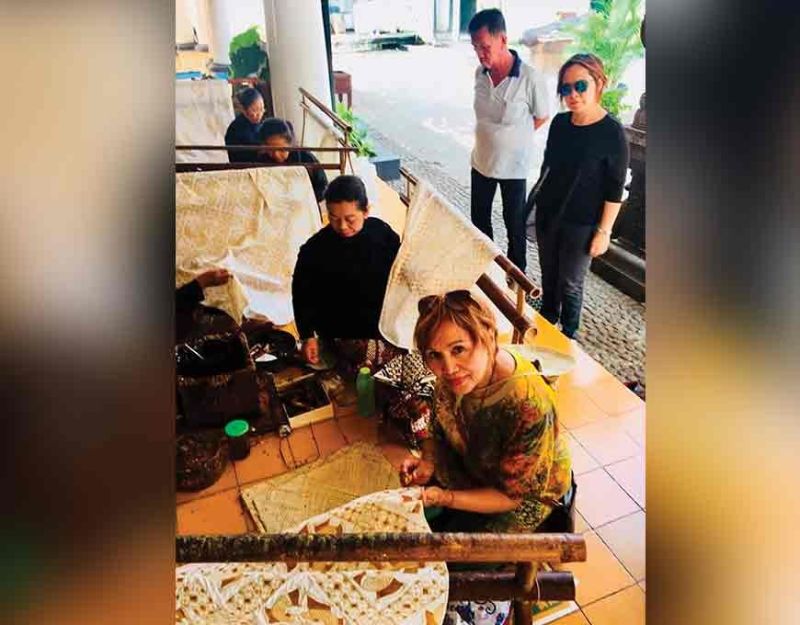 The author tried her skills at batik painting on a fabric at the grounds of the Royal Sultan Palace. (Photo by Debb Bautista) 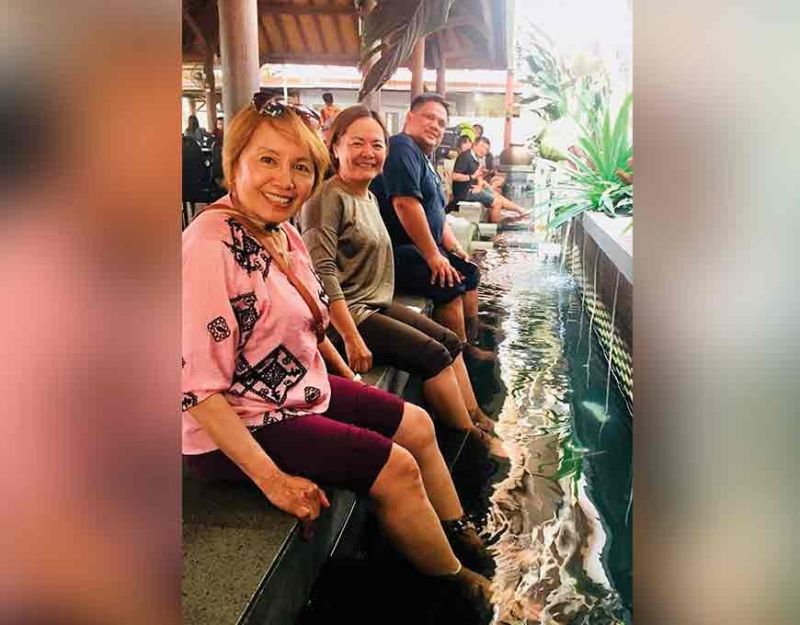 After a delicious lunch, we also enjoyed a free fish therapy at Jejamuran Restaurant (all-mushroom menu). (Photo by Debb Bautista) 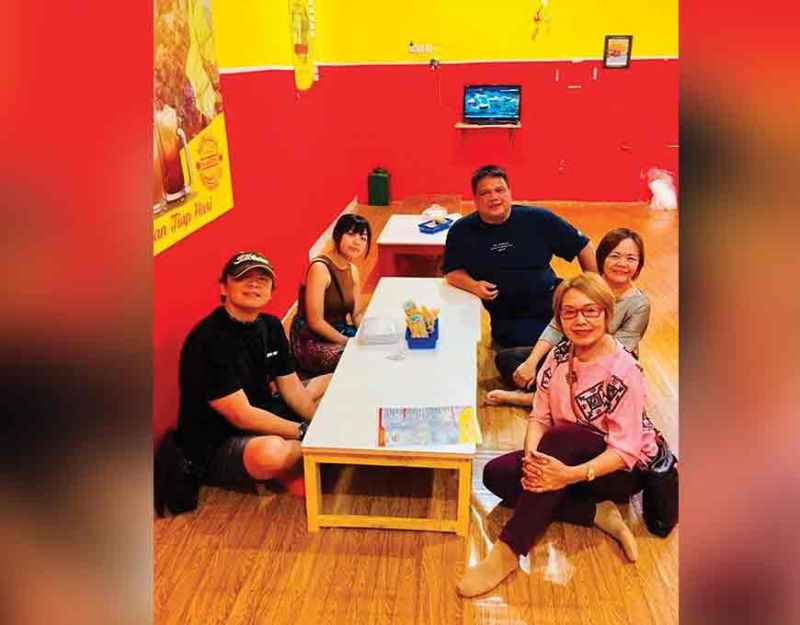 Dining at a local eatery was amusing. Squatting on the floor are: Peterey, Ann Drew, Shem, Tintin, and the author. (Photo by Debb Bautista) 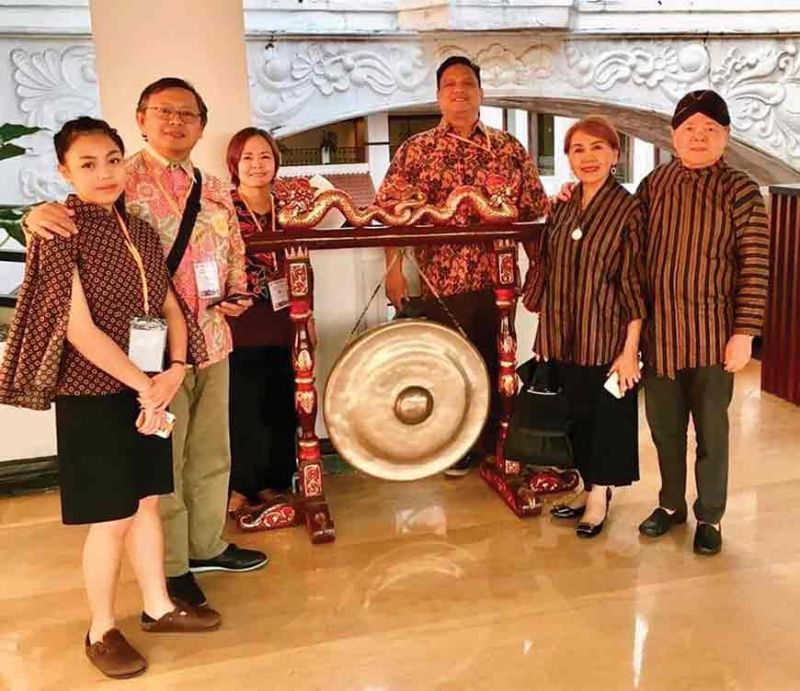 All dressed-up for the ASSEAN JCI Farewell Dinner are: Anne Drew, Peterey, Tintin, Shem, the author, and Rey. (Photo by Debb Bautista) 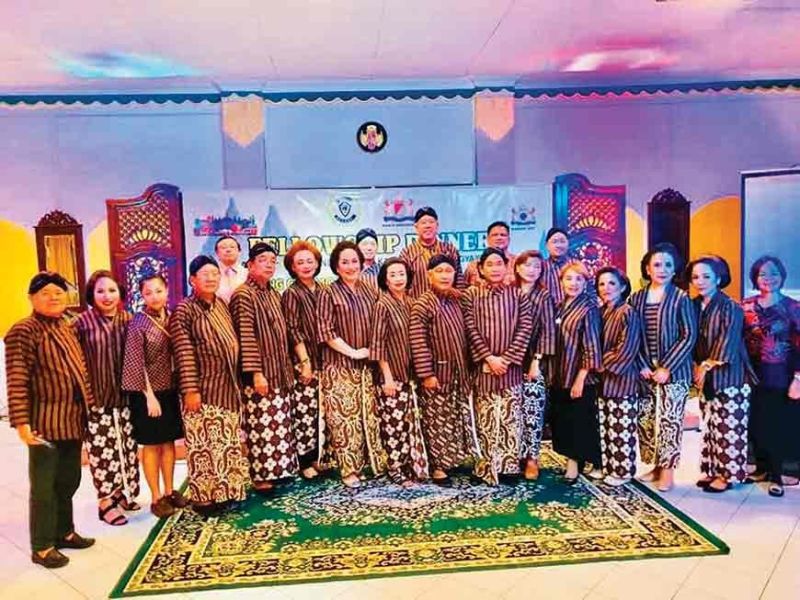 The Asean JCI Philippine delegates assembled for a group picture during the Farewell Dinner. (Photo by Debb Bautista)

NEAR Yogyakarta is the most beautiful Hindu Temple in the World – Prambanan. Comprising the remains of some 244 temples which were built in the 9th-c, Unesco World Heritage listed Prambanan as Indonesia’s largest Hindu site and one of Southeast Asia’s major attractions. Earthquakes toppled many of the shrines and remained in ruins for years. Most of the temples have now been restored to some extent while a vast amount of buildings still lie in heaps of stones.

Nevertheless, the majestic sanctuaries still emit magnificence and celestial power. It is quite a big area, and the structures themselves are unforgiving, but it was a great place for taking photographs.

Who would have thought that a place that used to be unattractive can be turned into a tourist attraction? Losing its function as a limestone mining site, the Tebing Breksi (Breksi Cliffs Park) now finds itself visited by crowds of all age groups. After the locals stopped mining it, some people came to enjoy the spot and uploaded their photos on social media, just for fun. In the hands of local artists, the 20-m abandoned limestone cliff was turned into a tremendous location to enjoy art performances, city views, and a sunrise or sunset. It is a unique cliff and a good vantage point for taking pictures, but development works are still going on, so you have to be careful with the steep stairs with no railings.

Our driver cum tour guide suggested we go to Ijo (means “Green” in Javanese language) Temple located at the highest place in Yogyakarta. It was built around the 9th-c on a mount named the Green Hill with a height of 410-m. The attraction of a golden sundown was a special magnet for us to visit Ijo Temple. Since Ijo sits high above Yogyakarta, we were impressed by the surrounding countryside views, busy airport, and a panorama of a stunning sunset! It’s a small but nice temple which is not visited by many tourists, so you can have some peace and quiet exploring the place. Mostly locals visit this place.

Contrary to that in larger cities, life in Yogyakarta is a lot more laid back. We found the locals friendly, food is good and cheap, and there’s an endless list of places to go to. So, if you’re wondering where to go as a first-time visitor to Indonesia... choose Yogyakarta.