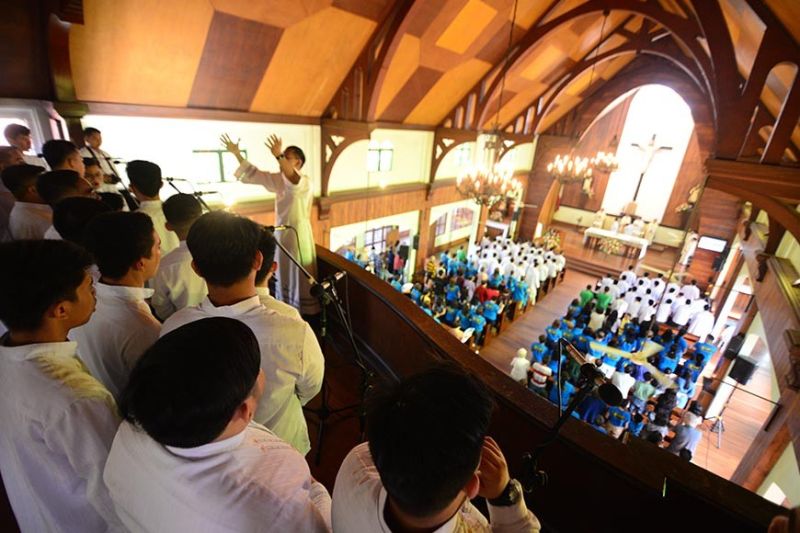 ILOILO. Seminarians of the Saint Vincent Ferrer Seminary Choir sing during the mass celebrated by Jaro Archbishop Jose Romeo Lazo at the 67-year-old SVFS Chapel. The mass was attended by alumni, seminarians and their families, lay faculties and guests on Sunday, November 24, 2019. (Leo Solinap) 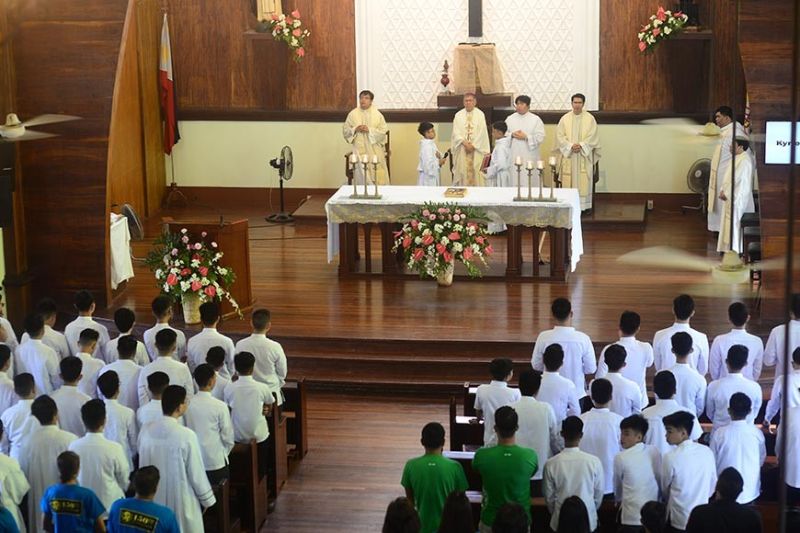 of the Saint Vincent Ferrer Seminary (SVFS) that has the theme "respicere" (in Latin) or "to look back again" (to where it all started).

More than a hundred guests, including families of the seminarians, alumni and lay faculty, joined the opening of the celebration on Sunday, November 24.

The SVFS, as the fifth oldest seminary in the country, has been the foundation of education for most priests in Iloilo and alumni or “Angkans” who are now in private sectors like non-government organizations (NGOs), banking, media and insurance industries, while a number became engineers, accountants, nurses, doctors and lawyers.

Since the seminary was founded in 1869 by Bishop Mariano Cuartero, O.P., who was appointed the first bishop of Jaro, with the help of the Vincentian Fathers, the SVFS has become the center of priestly education under the Archdiocese of Jaro, also one of the oldest dioceses in the Philippines.

The celebration Sunday started with a concelebrated Mass held in the morning at the 67-year-old SVFS chapel. It was led by Jaro Archbishop Jose Romeo O. Lazo D.D., with the homily focused on “Familia.”

Families of seminarians, lay faculty, guests and alumni joined in celebrating the mass as the Catholic Church celebrates the Solemnity of Christ the King on Sunday.

The mass was followed by a motorcade of more than a hundred vehicles and the opening of the exhibit inside the seminary halls.

The celebration is packed with a series of activities that start with a fellowship night organized by different batches outside the seminary.

A recollection and theological symposium by Cebu Auxiliary Bishop Messenger Midyphil Billones was held Monday, November 25, followed by games and a mass in the evening at the SVFS chapel with Billones as main celebrant and Retired Rev. Claudio Sale as homilist.

On Tuesday, November 26, a philosophical symposium will be conducted by Fr. Domingo Alimajen, as well as a mass to be celebrated by Bishop Emmanuel Trance, former rector of the seminary.

A whole day of vocation festival and a mass by Reverend Gregorio Banaga Jr. at the SVFS chapel will be celebrated on Tuesday, November 26.

On Thursday, November 28, a mass will be celebrated at the Saint Lorenzo Ruiz Parish in Caingin, La Paz by retired Jaro Archbishop Angel Lagdameo. It will be followed by a medical and dental mission. A film showing from Angkan filmmakers will also be held at the seminary auditorium.

A mass will also be celebrated by Cebu Archbishop Jose Palma on Friday, November 27, at the seminary chapel, followed by a sports fest and Valeda.

On the same day, a 150th Foundation Day Awards and Recognition and Alumni Night will be also held.

On Saturday, November 30, a mass from alumni bishops and priests at the Jaro Metropolitan Cathedral will be held. It will be followed by the 8th Angkan General Assembly meeting and a fellowship in the afternoon. (Leo Solinap/SunStar Philippines)