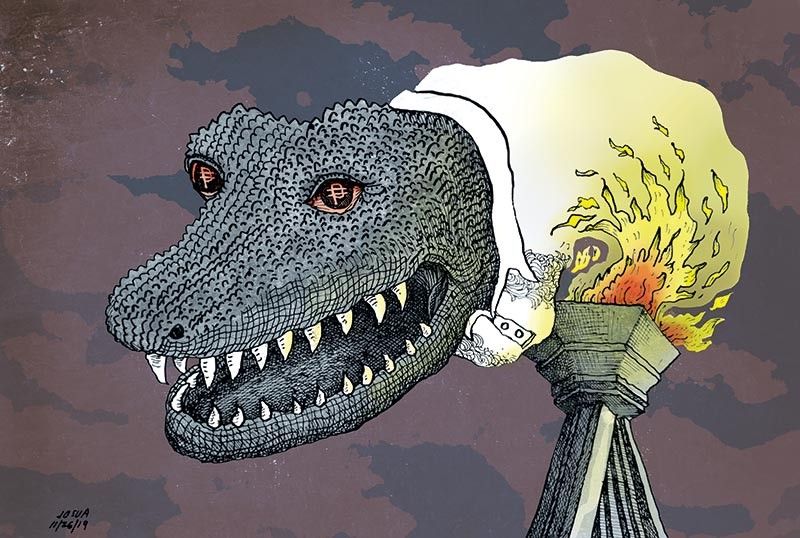 WHEN the 30th edition of the Southeast Asian Games opens Saturday, Nov. 30, all these talks about an exorbitant cauldron and hosting glitches may take a backseat as we cheer for our team. Our sports officials say we’re aiming for a gold haul this time, around 30 at least.

But this much we need to remind ourselves when the games are over: That there was haste in the preparations and in it some unscrupulous officials may have surreptitiously siphoned a good share of the funds. That we need to find out after all these bonanza.

The Philippine SEA Games Organizing Committee (Phisgoc) initially requested P9.5 billion for the hosting of the games, but the Department of Budget and Management (DBM) only approved P7.5 billion. The Phisgoc itself raised the P1.5 billion through sponsorship.

The budget for the P50 million cauldron, designed by National Artist Francisco “Bobby” Mañosa, who died February this year, was taken from the DBM-approved budget, and therefore the public has all the right to seek proper clarification on the actual cost of this “work of art,” as Phisgoc Chair and House Speaker Alan Peter Cayetano would always point out.

It must be noted that the late Mañosa was already in retirement since 2010 and underwent two major surgeries in 2012. Cayetano’s committee first met in May 16-17 last year. It can very well be said that it could be Mañosa’s architectural firm that saw through the design on behalf of the then 87-year-old Mañosa.

For the design, the national artist was paid P4.4 million, although government seems to misrepresent that fact by insistently pointing out that the monument’s cost was largely because it is a work of art. While it is a work of art, there really isn’t much information on the structural integrity of this concrete torch and as to how faithful it is to Mañosa’s design. The artist earned his name for incorporating indigenous materials into modern design, and that much we may find wanting in the final version that Cayetano wants to sell.

Rep. Joey Salceda (Albay) himself said the cost was “imeldific,” and if he understood his adjective, he’d just pointed out the obscenity of the spending. Does the P50 million budget also cover the tower on which the cauldron was mounted or does it only cover the cauldron itself and its fuel contraptions?

Visual artist Toym Imao, the artist behind the Tandang Sora National Shrine and Andres Bonifacio Shrine, shared his thoughts on the cauldron, saying the cost is simply not moral, most especially in the “light of the current administration’s budget cuts in education, health, and very poor record in supporting our sports programs and athletes.” “No amount of justification that ‘it is a work of art’ would make it right to spend that much for a public art installation,” he said in a social media post.

But it’s a monument for national pride, said Cayetano. Or shame if some investigation later will confirm suspicion that there is corruption underneath all this towering orchestration about art and pride in the SEA Games.