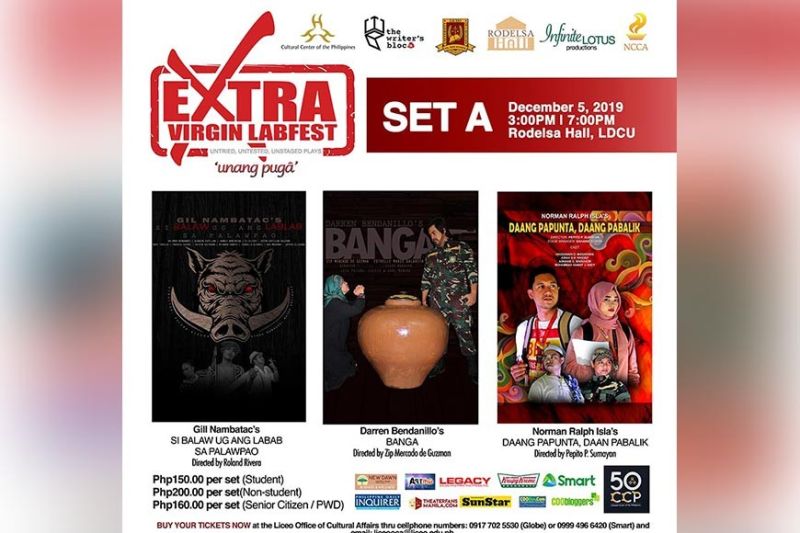 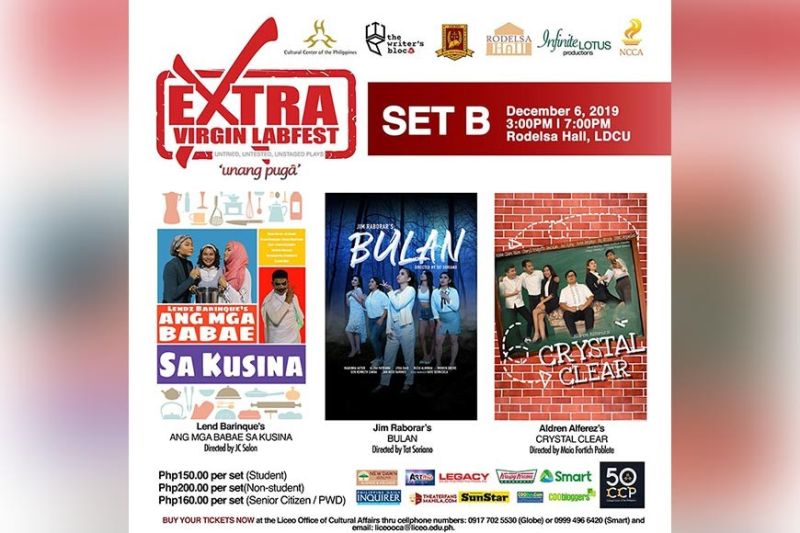 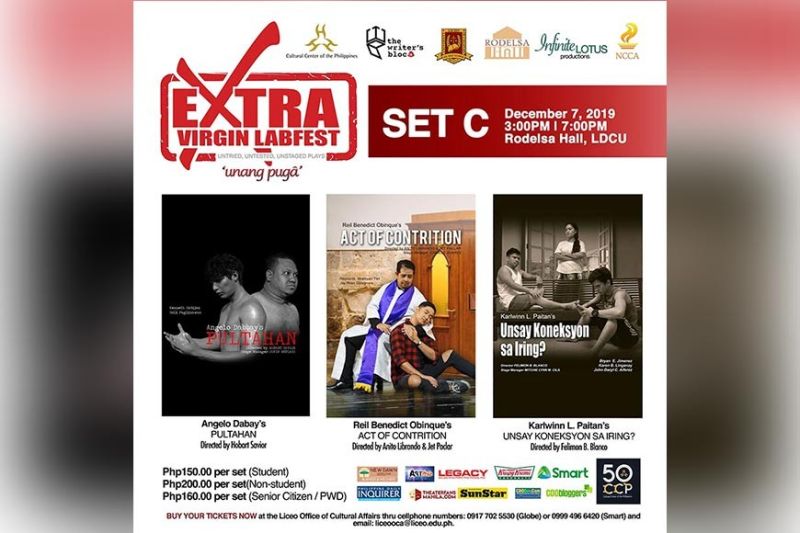 EXTRA Virgin LabFest (EVLF) is on its way to Mindanao. As an expansion of the Cultural Center of the Philippines’ Virgin Labfest, the festival will stage original one-act plays which had never been interpreted and adapted for the stage. What makes the festival stand out is its primary focus on narratives in Mindanao, capturing the regions’ realities, lore, and contemporary lifestyle.

The festival committee has selected nine one-act plays to stage at Liceo de Cagayan University’s Rodelsa Hall from December 5 to 7. Its opening gala at the same venue will perform a twin-bill production of Dominique La Victoria’s “Ang Bata sa Drum” and Maynard Manansala’s “Dalawang Gabi.” The festival has also selected three one-act plays for staged readings. These plays herald common issues in the regions where Mindanao-based playwrights and the art of theater thrive.

Some of the plays’ narratives revolve around the experiences of people in Mindanao, particularly on the conflicts stemming from beliefs, practices, and history.

General Santos-based playwright Norman Ralph Isla’s “DaangPapunta, DaangPabalik” depicts the realities of war. The consequences of extremism and military abuse tear families apart when two siblings argue whether they should leave their hometown and find a safer place to stay, or join the rebel forces to liberate their community from the destruction caused by the military.

This circumstance resonates with Darren Bendanillo’s “Banga.” This one-act play follows a war refugee who wishes to return home before the military burns their neighborhood. At a checkpoint, she encounters an abusive officer who forces her to do certain acts prohibited by her religion and culture.

The two plays unravel the tragic consequence in the armed conflict between the military and the extremists. Meanwhile, “Si Balawug ang Lablab sa Palawpao” by Iligan City’s Gil Nambatac explores one of the many causes of the armed conflicts. Based on the short story, “Nganong Nangaso si Balaw sa Patag sa Palawpao” by Shem Linohon, the play takes into account the history behind the greed of land-grabbers as they take away the lands of the indigenous communities.

While wars and conflict underscore these plays’ messages, Lendz Barinque’s “Ang Mga Babae sa Kusina” acknowledges the value of relationships among people who share different beliefs and come from different backgrounds. The play follows a house help on the brink of death. Before leaving with a character who personifies death, she reminisces her favorite moments with her three charges. The play blurs the line between religion and relationship, as well as gender roles and identity.

Barinque’s play, although tackling issues that pervades in reality, incorporates with it the elements of the supernatural. This genre ripples throughout other plays in the festival.

Interplay with the supernatural

Angelo Dabbay’s “Pultahan” finds similar themes with Barinque’s play in dealing with the world beyond the living. But this comes with a darker tone. The scene takes place in a mysterious room where the protagonist finds himself trapped with an unidentified character who is believed to be the personification of death. When the unnamed character offers him a choice whether to reflect on his past mistakes or risk losing his life, the confused man attempts to escape through a door that does not budge.

The same otherworldly elements manifest in Abigail James’ “Birhen” which is one of the selected plays for stage reading. The play depicts a character who practices alternative medicine in a rural town. When her childhood friend visits her, she begins to witness visions in her dreams. She discovers that there are limits to her interaction and relationship with her friend.

Jim Raborar’s “Bulan” goes deep into the lost traditions of nature playing a part in human activity. It follows five women who have been cursed. To break the spell, they need to gather beneath the light of the moon and entice young men to break it for them.

These plays attempt to give meaning to the unexplained. Other plays reveal discoveries reeling from controversial to life-threatening.

One function of play as an art form is to deliver a message that engages the audience to reconsider the realities they live in. Two of the plays set for staged readings depict issues surrounding the family. Linda Manalo’s “Hiyassa Putikan” reimagines a forbidden love by an unlikely pair. Tat Soriano’s “Reyna” reveals how far a mother can go for her daughter to win a prize.

In “Unsay Koneksyon sa Iring?” by Karlwinn Paitan, family members accuse each other of their flaws and undertakings kept hidden after years of indifference. But when humor comes along in confessions and revelations, Alden Alferez’s “Crystal Clear” examines the influence of the faculty over their students.

Reil Benedict Obinque’s “Act of Contrition” probes how power is abused by those in authority, specifically by spiritual and religious leaders. His tragic play about a young man’s confrontation with his abuser reveals the prevailing issues of the Church’s abuse.

EVLF opens the avenue where plays and theater productions raise awareness on prevailing issues. Focusing on Mindanaoan narratives, the theater festival will bring to the stage the realities recurring in the local scene.