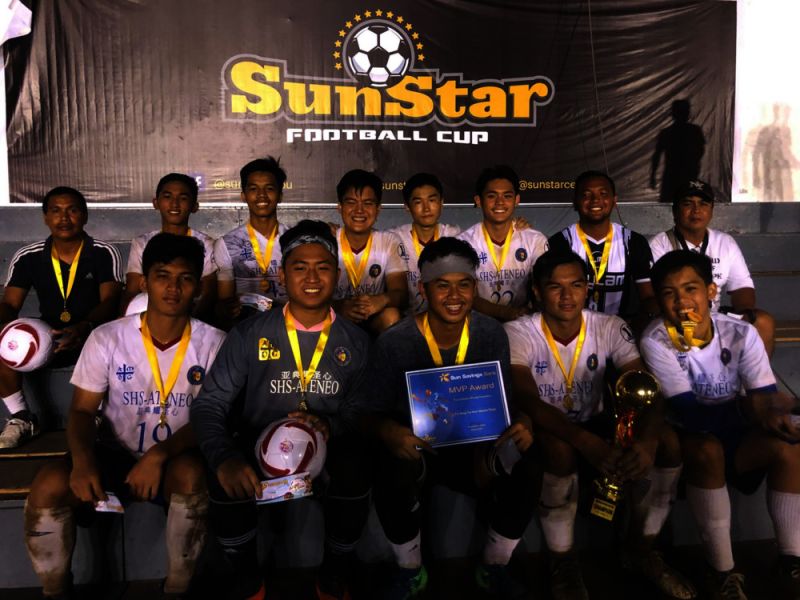 CHAMPION AGAIN. Membres of the Sacred Heart School-Ateneo de Cebu celebrate after winning their second title of the day in the SunStar Football Cup. (Contributed photo)

Ateneo, which also won the Players 17 division earlier in the day, made it two in a row after snagging the Boys 19 crown over Don Bosco Technical College (DBTC), thanks to an early goal, 1-0.

Nico Matugas got the MVP award.

Earlier, Ateneo topped Group 4 with six points on two wins and a loss and ousted CIE, 2-0, in the quarterfinals before beating DBTC A in the finals.

DBTC C also topped their group with seven points and beat University of San Carlos 12, 1-0, in the quarterfinal round and Cebu International School in the semifinals.

On the other hand, Raffy Llorante towed Leylam to the Men’s Professional title after a 2-0 win over Mega Review and Tutorial.

Leylam finished first in Group 3 and beat Terradyne, 2-0, in the quarterfinals and Giuseppe Gerrys, 2-0, in the semifinals.

On the other hand, Mega Review, which didn’t get past the group stage last year, topped Group 1 with six points and ousted Shangrila, 1-0.

The team of Peter Lim then went on to oust DBTC coaches, led by Glen Ramos and Ray Calo, 7-6, via shootout with Calo skying his attempt. In the finals, Mega Review couldn’t crack the Leylam defense and settled for a runner-up finish. (ML)