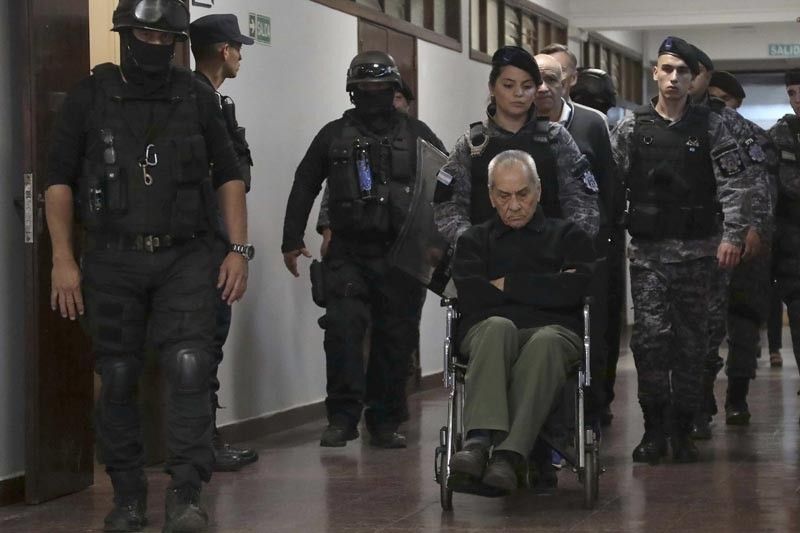 ARGENTINA. Rev. Nicola Corradi, in wheelchair, Armando Gomez and Rev. Horacio Corbacho, are escorted out of a courtroom, after being found guilty of sexual abuse of deaf children at a Catholic-run school, in Mendoza, Argentina, Monday, November 26. The court sentenced Rev. Nicola Corradi, to 42 years in prison, and Rev. Horacio Corbacho, to 45 years, for acts that occurred at the Institute in Lujan de Cuyo, a municipality in the northwestern province of Mendoza. The court also sentenced gardener Armando Gómez to 18 years in prison. (AP)

MENDOZA, Argentina -- Two priests were found guilty on Monday, November 25, of sexually abusing deaf children at a Catholic-run school in Argentina and sentenced to more than 40 years in prison, in a case that has shaken the church in Pope Francis’s homeland.

A three-judge panel in the city of Mendoza sentenced the Rev. Nicola Corradi to 42 years and the Rev. Horacio Corbacho to 45 years for abusing children at the Antonio Provolo Institute for Deaf and Hearing Impaired Children in Lujan de Cuyo, a municipality in northwestern Argentina.

Corradi, an 83-year-old Italian, and Corbacho, a 59-year-old Argentine, were arrested in 2016. The court also sentenced gardener Armando Gómez to 18 years in prison.

It’s expected that Corradi will remain under house arrest because of his age, while Corbacho and Gómez will be held in a prison in the city of Mendoza.

The verdicts can be appealed.

The judges found the men guilty of 20 counts of abuse, including rape, that occurred between 2005 and 2016 at the school, which has since shut down. The 10 victims were former students and all minors at the time of the abuse. The verdict can be appealed.

Pope Francis has not commented publicly on the case, although in 2017, the Vatican sent two Argentine priests to investigate what happened in Mendoza.

“Thank God there has been justice and peace for the victims,” one of the priests, Dante Simon, told The Associated Press (AP) on Monday.

After the sentence was delivered, several victims expressed their joy in the courthouse hallway by jumping and raising their arms in the air, as if they were clapping. They embraced the prosecutors who had investigated their cases.

“I am happy, thank you so much for the battle, because everyone has supported us. ... This has changed my life, which is evolving,” said Vanina Garay, 26, speaking with the help of an interpreter.

The case has shocked Argentines -- as did the revelation that Corradi had been previously accused of similar offenses at a sister agency, the Antonio Provolo Institute in Verona, Italy, but was never charged.

The Vatican had known about Corradi since at least 2009, when the Italian Provolo students went public with tales of abuse and named names. The Vatican ordered an investigation and sanctioned four accused priests, but Corradi apparently never was sanctioned in Italy.

The defendants, who had pleaded innocence, declined to make statements ahead of the judges’ ruling. They appeared somber as they arrived in the courtroom, with Corradi in a wheelchair, his gaze fixed on the ground.

In a statement, the Archbishopric of Mendoza expressed “solidarity and closeness with the victims and their families, who have reported suffering the most aberrant mistreatment” and vowed to “keep working to ensure that these situations are not repeated.”

The Provolo victims have said they did not feel that the local church or the Vatican were protecting them.

“The Argentine court has given the traumatized children of Provolo a measure of justice that the Catholic Church failed to give them,” said Anne Barrett Doyle, co-founder of the online research database BishopAccountability.org.

“We hope the prosecutors now will launch a criminal investigation of the archbishops and other church leaders who knew or should have known that the school was being run by a child molester,” Doyle said.

She also said “the pope too must accept responsibility for the unimaginable suffering of these children. He ignored repeated warnings that Corradi was in Argentina.”

Prosecutor Gustavo Stroppiana was tearful as he said: “None of this can generate joy, but it does bring satisfaction because we were able to judge acts that had been silenced for so many years.”

Simon, the investigator sent by the Vatican, had previously told AP that the pontiff expressed his sadness about the case and told him that "he was very worried about this situation."

In a report submitted earlier to the Vatican, Simon requested the maximum canonical penalty for Corradi and Corbacho, that they be made to "resign directly by the Holy Father." His report must be reviewed by the Congregation for the Doctrine of the Faith.

Former male and female students testified that the priests touched and sometimes raped them in their dormitories and school bathrooms. They also said they were forced to look at pornographic images. They said they were warned to keep quiet.

Investigators found records of complaints made by parents that weren’t followed up, photographs of a naked girl on Corbacho's computer and chains he allegedly used to subdue one girl.

Many in Argentina have asked why Francis did not remove Corradi as the authority at the Mendoza school once he learned of the allegations in Verona.

Corradi’s name appeared publicly in 2009, when 67 people said they were abused at the Verona institute by 24 priests, lay people and religious brothers, and specifically said Corradi was in Argentina.

In 2012, the diocese of Verona asked for forgiveness from the victims and sanctioned 24 of the accused, although Corradi was not among them. None of the cases ever went to trial.

Corradi’s name appeared again in 2014 in a letter written to the Pope by deaf students in Verona that reiterated the potential danger he posed in Mendoza.

Corradi is also being investigated in the province of Buenos Aires, where alleged abuses occurred in the Provolo Institute of the city of La Plata.

The priest ended up there after Verona, but before he went to Mendoza.

Victims’ families believe Corradi’s movements reflect the practice of the Catholic Church to transfer from one place to another priests accused of abuse.

In another case that raised questions for the pontiff, a bishop once close to the pope announced he would arrive back in the country Tuesday, November 26, to respond to prosecutor’s allegations of sex abuse.

A prosecutor accused Zanchetta of "aggravated continuous sexual abuse” of two seminarians, charges that carry a maximum penalty of 10 years in prison. He has denied the charges, which don’t involve minors.

The Vatican insists the first accusation of actual sex abuse was only lodged against Zanchetta in late 2018. But AP and the Argentine newspaper El Tribuno have reported that documents and testimony from diocesan officials raised credible allegations of inappropriate sexual misconduct well before then. (AP)