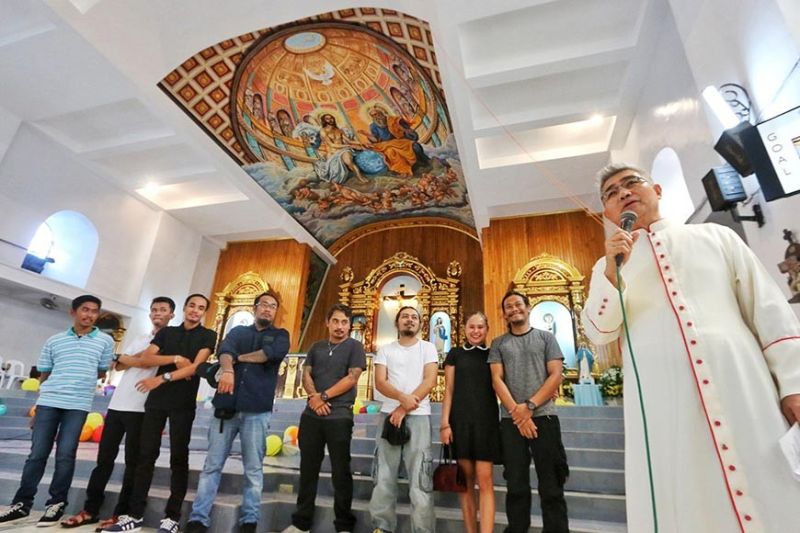 MSGR. Jaime Villanueva became curious after he was told about the mural on the ceiling of the Sts. Peter and Paul Parish in Bantayan town, Cebu.

The chief priest of St. Francis Xavier Parish—a centuries-old church in Palompon town, Leyte—felt excited when he heard that most of the artists behind the artwork were from Palompon.

Aris Avelino Pastor, lead artist of art collective Dibuho Kisame, said he was contacted by his relative, who served as the group’s link to Villanueva.

After he was told about the project, Pastor said they did not think twice. They accepted the project.

“We reported right away. We already like the environment of ceiling painting. At the same, this is a good training for us,” Pastor said in a mix of Cebuano and English.

The one on the ceiling of St. Francis Xavier Parish was unveiled on Friday, Nov. 22, 2019.

The painting on the dome above the altar was inspired by the “Last Judgement” of Francisco Arguello, a famous artist from Spain. The image is mixed with the Dibuho Kisame crew’s interpretations.

The church was built in the 1690s, based on the history written by Fr. Antonios Malenski, a Jesuit priest from Czech Republic in 1736. It is made out of stones and the convent that was made of wood is still standing, according to Villanueva.

Before the Second World War, the church’s walls had murals. Some parts of the painted walls were destroyed by bombs during the war.

Villanueva said he had thought of leaving a legacy to Palomponganons before he would end his stint as the parish priest.

He decided that one of the gifts for the faithful in the town would be a ceiling mural from Dibuho Kisame.

Villanueva said he wants the church’s ceiling to be full of paintings inspired by significant events from the Bible, the life of Jesus, life and works of St. Francis Xavier and the Moros Seige in Palompon, among others.

As Dibuho Kisame continues its work on the ceiling, Palompon’s history would also be depicted.

Villanueva’s project will be completed in 10 months. The next unveiling will happen in September 2020.

Eight painters, including Pastor, completed the first part of the ceiling mural. They completed their work in five weeks.

Most of the artists are from Palompon, while three of them are from Bantayan.

Pastor said the churches in Bantayan and Palompon have different designs and patron saints. These challenged the group, he said.

He said Bantayan’s church has a wide and high ceiling unlike Palompon’s.

St. Francis Xavier Parish’s ceiling is nearer to the floor. This means that the paintings must be refined and detailed, said Pastor.

The challenges were not a problem for Dibuho Kisame. They freed their creativity, enjoyed the painting process and learned.

“Life’s awesome if we are creative,” Pastor said.

The artists, he said, just wanted to help the church. They also want to encourage Palomponganons to understand the Christian teachings and learn the church’s rich history.

“For now, maybe, we are not that perfect. But if we don’t stop and we keep on pushing beyond the limitations, maybe we would bloom into something like the pink lotus,” Pastor said.

The church needs to raise P7 million to complete the ceiling mural and installation of wires.

Donations may be directly given to the parish office or deposited in the following PNB bank account number: 313910070190. The account is under the name of Jaime Villanueva.