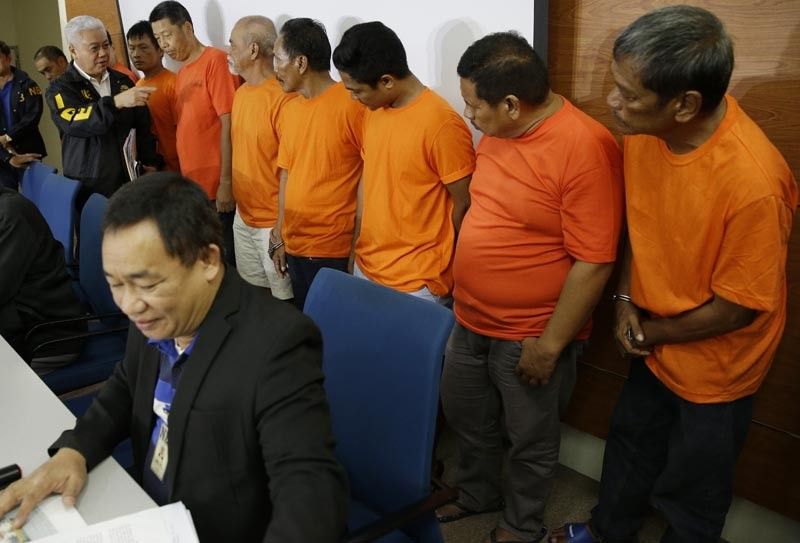 MANILA. National Bureau of Investigation (NBI) Deputy Director for Forensic Investigation Service Ferdinand Lavin (rear left) talks to suspects as they are presented to reporters at a press conference in Manila on Tuesday, November 26. The NBI said the coast guard seized a Liberian-registered vessel, the M/V Dayang Century, and two smaller craft used to dump tons of phosphogypsum on a riverbank in Cabangan town in Zambales province. Two Chinese men and seven Filipinos have been arrested. (AP)

The National Bureau of Investigation (NBI) said the coast guard seized a Liberian-registered vessel, the M/V Dayang Century, and two smaller craft used to dump tons of phosphogypsum on a riverbank in Cabangan town in Zambales province.

The suspects were involved in transporting about 53,000 tons of phosphogypsum, a toxic byproduct of fertilizer production that can contain natural radioactive elements, from South Korea to Cabangan, the NBI said in a statement.

Government agent Habeas Corpuz said the suspects have been charged with illegally importing and dumping the waste, which is banned in the Philippines and could jeopardize the health of villagers and contaminate water supplies.

“The waste was just left exposed. There was no warning,” Corpuz said by telephone. “This has naturally occurring radioactive materials. So if people inhale it or it seeps into ground water, it can be carcinogenic and cause lung diseases.”

During surveillance, the suspects were seen hauling the waste with the use of cranes from the Dayang Century, which was anchored about 1.5 kilometers (nearly a mile) from the coast, to a private jetty port in Cabangan. Trucks then transported and dumped the waste on a nearby riverbank, the NBI said.

Nearly half of the phosphogypsum cargo had been dumped in an open pile when government agents barged in and made the arrests, Corpuz said, adding that authorities may order the waste to be shipped back to South Korea.

The Philippines is among Southeast Asian countries that have protested being treated like dumpsites by wealthier nations. In May, Philippine authorities shipped back 69 containers of what officials called illegally transported garbage back to Canada.

Philippine officials said 103 containers of garbage were transported to the Philippines in 2013 to 2014 and falsely declared as recyclable plastic scraps. The contents of some of the containers were disposed, including in a landfill, leaving 69 containers of electrical and household waste, including used diapers, rotting in two Philippine ports. (AP)