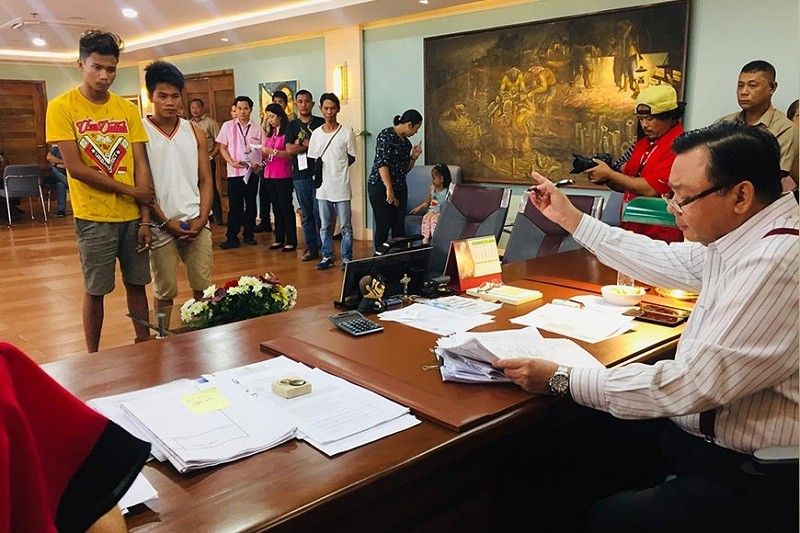 ILOILO. Send them to jail. This was what Iloilo City Mayor Jerry Treñas (right) told the police on Tuesday, November 26, at the Iloilo City Mayor's Office when he saw the two suspects, Alvin Salomeo and Jeffrey Palma, who allegedly cut half the palm tree in Iloilo City early Tuesday morning. (Leo Solinap) 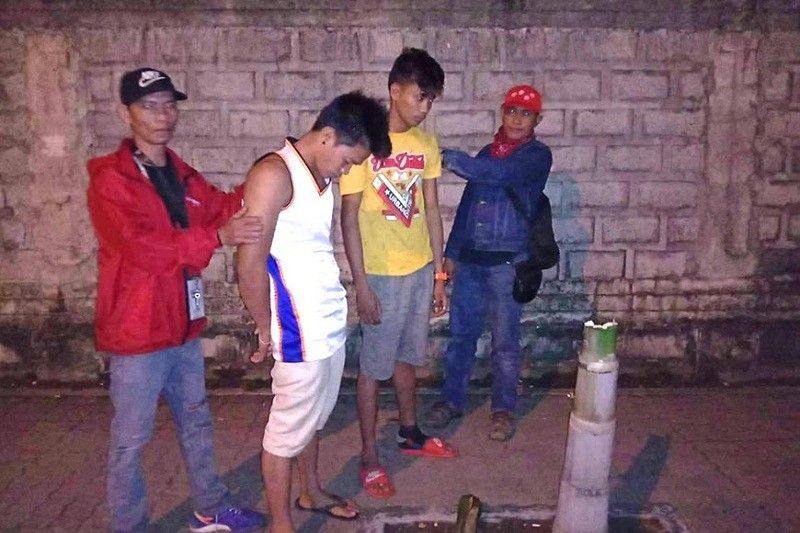 ILOILO. Suspects Alvin Salomeo and Jeffrey Palma, who allegedly cut in half a palm tree in Iloilo City, were arrested early Tuesday morning, November 26, by members of the green guard of the City Government. (Photo from the Iloilo City Government Beautification Program)

TWO men were arrested early Tuesday morning, November 27, for destroying a royal palm tree along Benigno Aquino Jr. Avenue, which was part of the beautification project of Iloilo City.

Arrested were Alvin Salomeo from Capiz and Jeffrey Palma of Sara, Iloilo.

Reports said Salomeo and Palma were nabbed by the "green guards" of the City Government around 3 a.m. after cutting the palm tree, which was planted along the highway, in half.

The royal palm, a tree native to south Florida and Cuba with a height of two to four meters, costs P5,000, according to the price quotation of the Royal Palms Plantation to the Iloilo City Government.

The two suspects were then brought before Iloilo City Mayor Jerry Treñas.

"Nautod lang paglabay namon (We just cut the tree when we passed)," the suspects said.

Treñas answered back, saying: "What happened to you? You just go to the city to destroy trees."

He told the police to file a case against the suspects.

The mayor told SunStar Philippines that the incident saddened him.

"It is very sad that there are people whose job is to destroy our work," he said.

"My offer is that if they continue arresting those people who are destroying [the plants], we will find ways for them to become regular employees," he said.

The mayor has 30 green guards whose position is job hires. They work at night to oversee the beautification projects of Iloilo City, especially the flowers and palms that are planted along the Benigno Aquino Jr. Avenue.

Last week, three persons were arrested for picking sunflowers along the service road of the same avenue.

The suspects were identified as RJ Villegas, Alexes Nejana, and Daniel Soropia. The three, including Salomeo and Palma, were charged with malicious mischief.

"We deployed 30 green guards to protect the plants in our plazas and esplanades, and to be agents against littering and vandalism. They have undergone a five-day training on policies and enforcements of the Iloilo City Government," Treñas said.

He said the City Government also deployed 30 tourist guards to ensure the safety of the tourists.

"To enforce the city's anti-littering ordinance, the tourist guards and green guards were also part of the 162 sanitation officers," Treñas said.