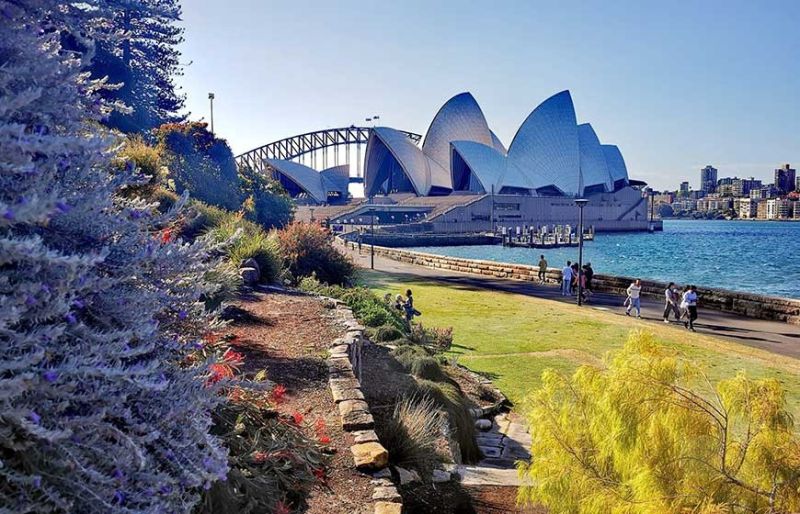 Sydney opera house from the Botanical Garden. In this rare shot, one will see that it is actually a complex of theaters and not just a single structure. (Photo by Grace M. Avanzado) 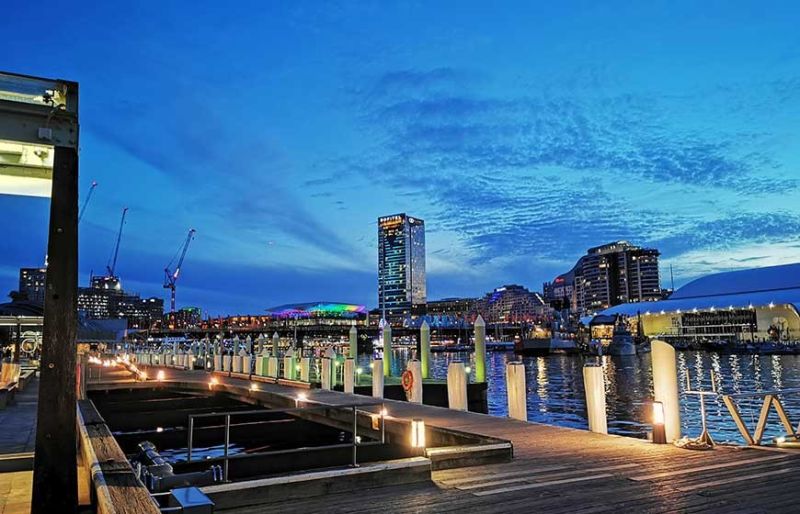 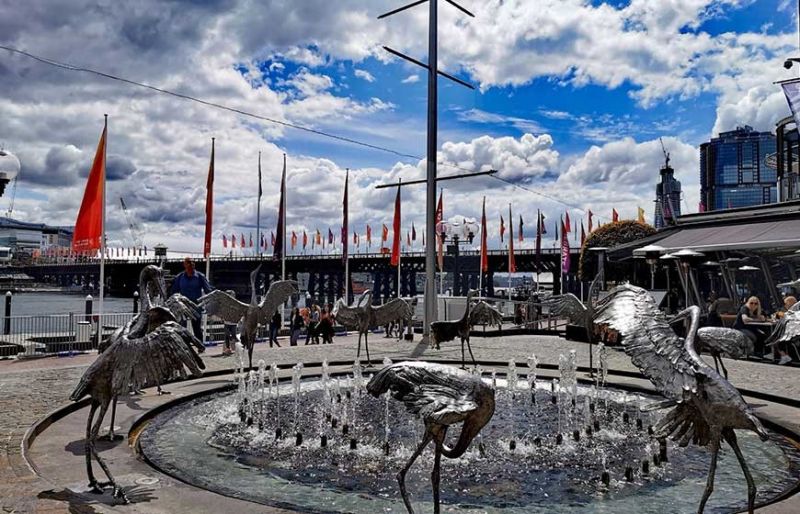 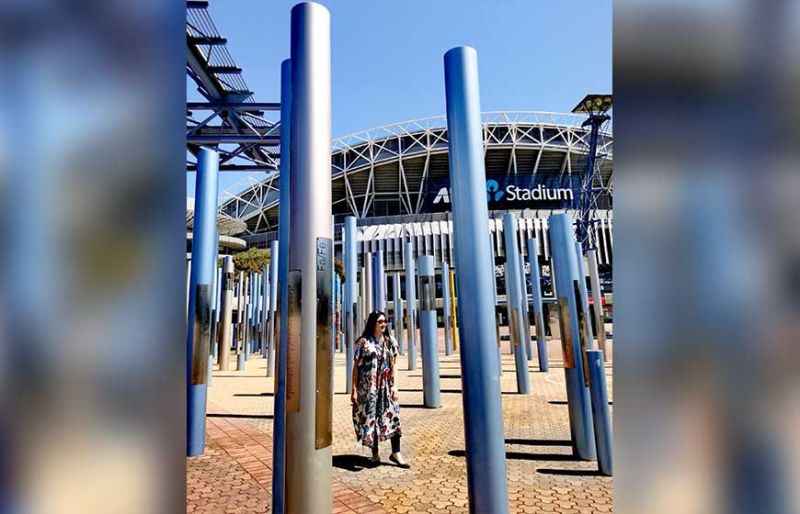 Stadium at olympic park with poles that have names of volunteers during the Olympics etched on them. (Photo by Grace M. Avanzado) 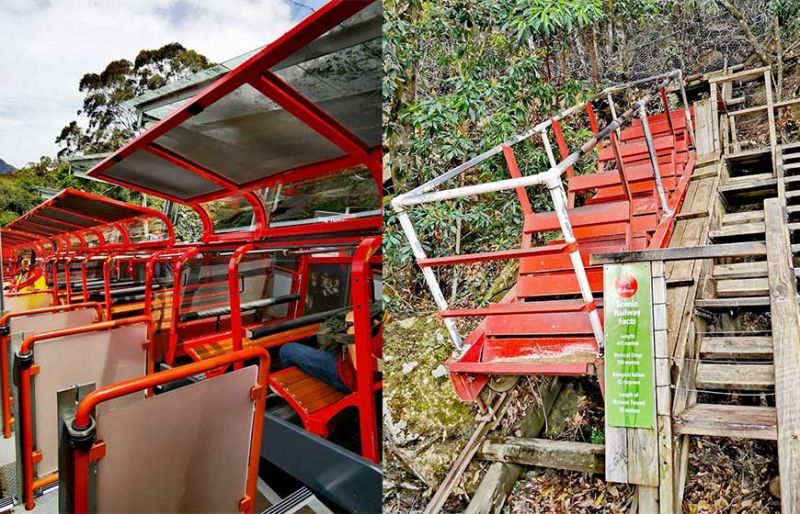 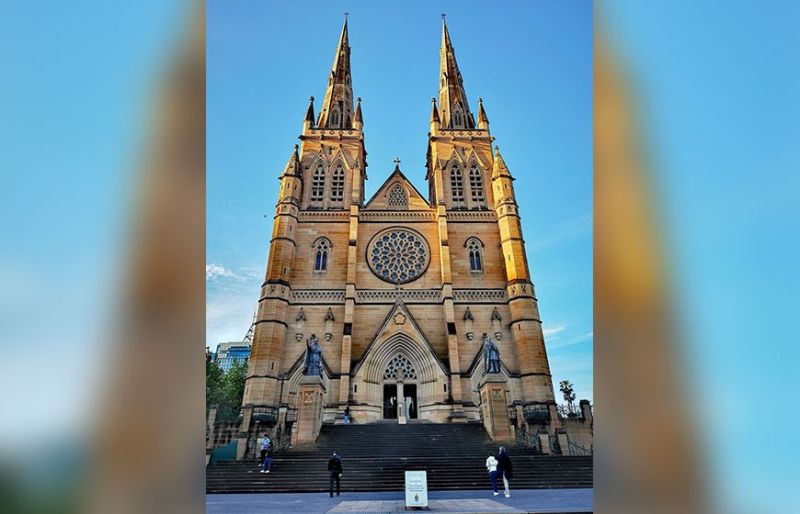 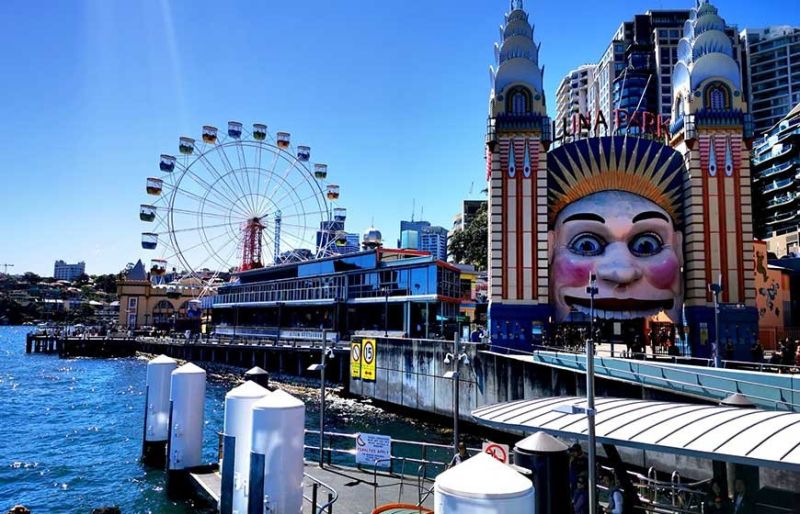 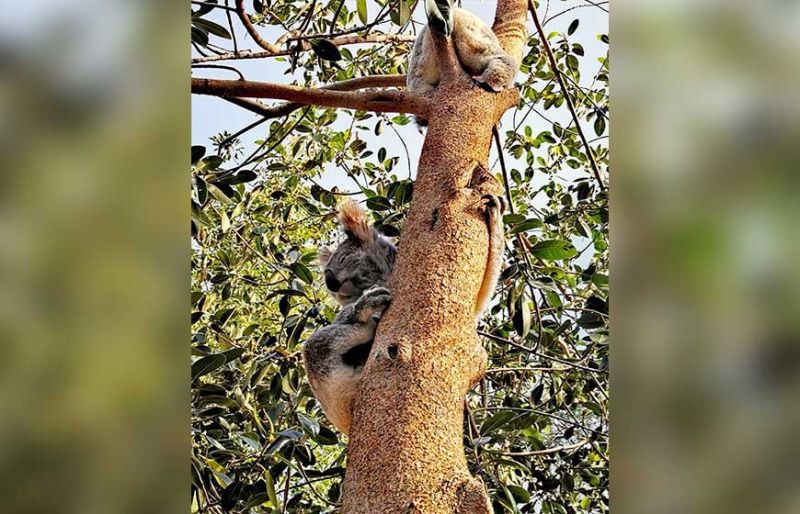 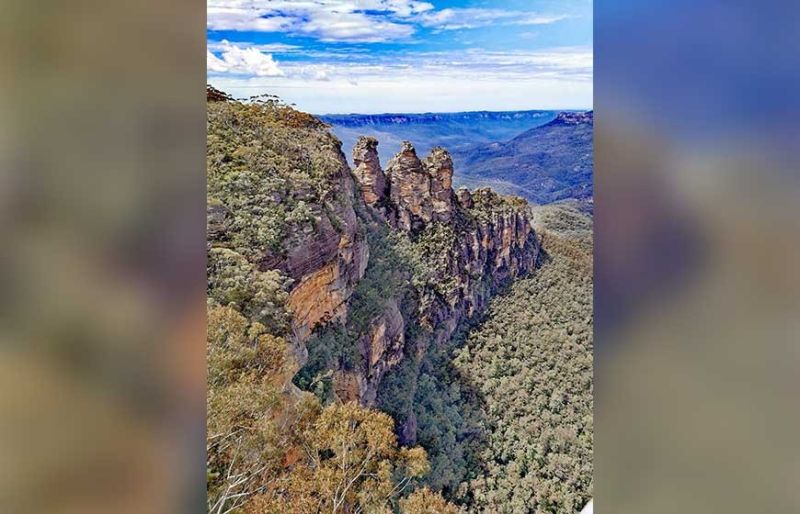 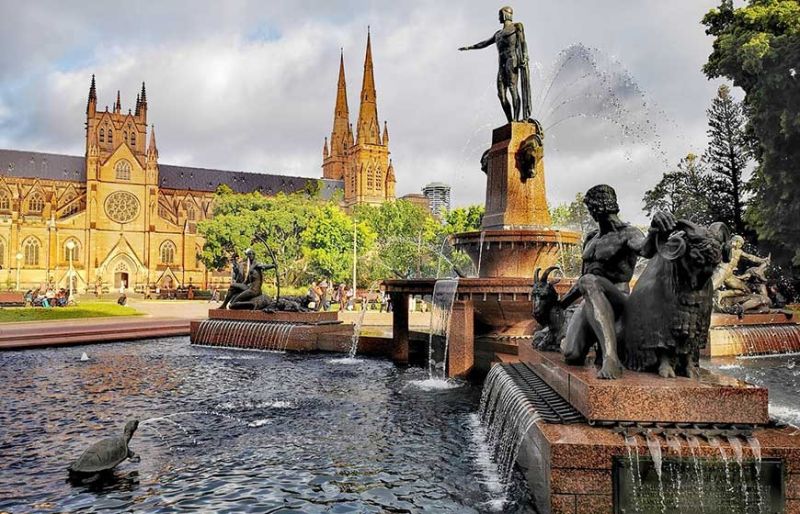 MY PLANE landed in Sydney on a crisp clear day, perfect for straight-from-the-airport sightseeing plans.

A first-timer in this “Land Down Under”, as our group was led into the pathway of the beautiful Darling Harbour precinct to find our lunch venue, I quickly surveyed the view – birds flying in and out of restaurants, tourists taking photos, yachts shining proudly in the sun, colorful flags dancing in the wind - and felt very welcome. First impression, flying marks.

After lunch, we were taken for a short drive around the city before we proceeded to Bondi Beach, stopping at some lookout points that offered spectacular views of the city below. Just seven kilometers from Sydney’s central business district, Bondi Beach truly lives up to its stellar reputation. Its convenience does not diminish its beauty, and although at first I hesitated to step onto the shore itself because I was not in dressed for the beach, I could not resist! In fact, I was the only one in our group who dared, and the feeling of cool sand on my feet as I walked all the way to where its famous waves swept the shore was refreshing. Around 35,000 fill each nook and cranny of its one-kilometer shoreline during summer days, but today, there were mostly curious tourists milling around.

We were up early the next day, because after a short stop at the Homebush Olympic Site (Australia played host in 2000), we were going up to the Blue Mountains, part of the Unesco World Heritage-listed Greater Blue Mountains National Park. Thirteen percent of all known eucalyptus species around the world can be found in this area. As we alighted, we went straight to Echo Point to view the famous Three Sisters. After lunch, we entered Scenic World and got on the steepest funicular railway in the world called the Scenic Railway. I was not prepared for the sudden drop that has a maximum gradient of 52 degrees as it descends through the rock cliffs for 415 meters. When the guide showed us the wooden “carriages” they used before the modern funicular was built, I was shaking my head at their bravery as I looked up at where we came from and could not even see the platform.

The Blue Mountains got its name because of the blue color it takes when viewed from a distance caused by the dispersion of oils from the eucalyptus trees. When the oil meets light, dust and water vapor, it results in a blue hue, and this effect can be viewed from Echo Point on a clear day. The only World Heritage Area in the world dominated by trees, this popular attraction cannot be covered in a day, so I left feeling like I experienced only the tip of the iceberg.

Sydney’s most famous landmark, its Opera House, was a challenge to visit because I was insistent on getting the best view possible at ground level. One of the most-photographed modern monuments of today – especially with fireworks in the background on New Year’s Eve – I was so surprised to find out that it was not one continuous structure. Formally opened on October 20, 1973 and designed by Danish architect Jorn Utzon, this landmark is really a complex of theaters and halls linked together beneath its famous shells.

My personal favorite spot for viewing this famed building is from the Royal Botanical Gardens. We really lingered there for awhile, observing the sun from its high point to near dusk, fascinated by the way the light rays showed off those two-toned shell-shaped roofs. Unesco inscribed this site in 2007, and up till now, it is a standout from any angle.

The “Coathanger” – Sydney Harbour Bridge – is the tallest steel arch bridge in the world. Its southern end is located in The Rocks area and the northern end at Milsons Point. Some friends took me on a ferryboat ride which took me from south to north, and I could see people climbing their way up the bridge to its center. For someone with acrophobia like me, I was very impressed and was told this was a very popular thing to do here for locals and tourists alike.

Walking around this city, browsing the weekend market at The Rocks , smelling the flowers in local parks, admiring shopping centers inside historic buildings, meeting many smiling locals and delighting in their cuisine had me wondering what took me so long to visit this part of the world when I felt so much at home here.

I am now mentally making a list of things I would like to do when I go back, like sit in the famous Mrs. Macquarie’s Chair, watch a show in the Opera House, attend a Latin Mass in St. Mary’s Cathedral, find delight in the rides in Luna Park, go swimming in Bondi or Manly Beach, have lamb chops in one of the restaurants in Circular Quay, wake up early to visit the Fish Market and make a stop at Cockatoo Island.

It has been a pleasure to meet you Sydney, and we shall see each other again.