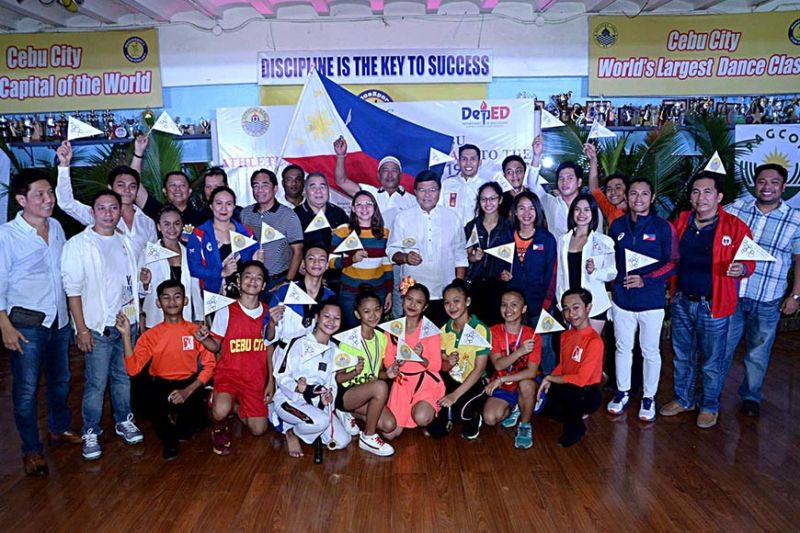 AS THE opening ceremonies of the 30th Southeast Asian Games (Seag) draw near, Cebu City has sent off its medal hopes with the assurance that it will backstop them should they run into the problems athletes from other countries have encountered following their arrival in the country for the biennial games.

During the ceremonial send-off for the 29 Cebuano athletes and their eight coaches on Tuesday, Nov. 26, 2019, Cebu City Mayor Edgardo Labella expressed his willingness to help the Cebuano athletes going off to Luzon to compete in case of problems especially in regard to food and accommodations.

“We are preparing. If nothing will improve, we have already talked with our City administrator. And at any time if there is no improvement in the food situation, I am planning to go and check on them personally,” said Labella.

“But I believe that these Cebuano athletes are not only resilient but can also adjust to any situations. They are patient and considerate; however, it is also our obligation as City officials to check on the welfare and well-being of our athletes,” Labella said.

The Philippine Southeast Asian Games Organizing Committee (Phisgoc) has been hit by complaints from football teams from Malaysia, Myanmar, Cambodia, Timor-Leste, Thailand and even the host country, the Philippines, ranging from long pickup times at the airport, and hours-long wait for their hotel rooms, to the poor quality of transportation and food in hotels, and the long distance from the hotel to the football field.

During the send-off at the Dance Sport studio in the Cebu City Sports Center, Olympian Mary Joy Tabal, one of the Cebuano competitors for this year’s Seag, requested the public to minimize making negative comments on social media against the Philippines.

She also advised fellow athletes to stop using social media and instead focus more on preparing for the competition.

“We should avoid social media for now, because we have read a lot of negative comments instead of positive news that will encourage our athletes. I am personally affected because we are representing the country. We athletes are the ones who fight. And knowing that it is harming our country, it’s devastating,” said Tabal, who is seeking a back-to-back SEA Games gold medal in the women’s marathon on Dec. 6.

“It would have been better to cooperate and cover up any shortcomings of our government or the person assigned to these certain events for the preparation of the SEA Games,” Tabal added.

Tabal said she was satisfied with the food and the place during her visit to the athletic stadium in New Clark City in Capas, Tarlac last week. She described the place as serving adequate and nutritious meals at the stadium’s dining hall.

Tabal, the first Filipina marathoner to compete in the Olympics when she joined the 2016 Summer Games in Rio, Brazil, hopes the government will soon be able to solve the problems the national athletes are facing, as she understands the situation of athletes.

Aside from Tabal, other Cebuano athletes participating in this year’s games have already reaped medals for the country in previous editions of the event.

Niño Surban got a bronze in the 2011 Seag for cycling. (RSR)