Duterte orders end to recruitment of Filipinas for slavery 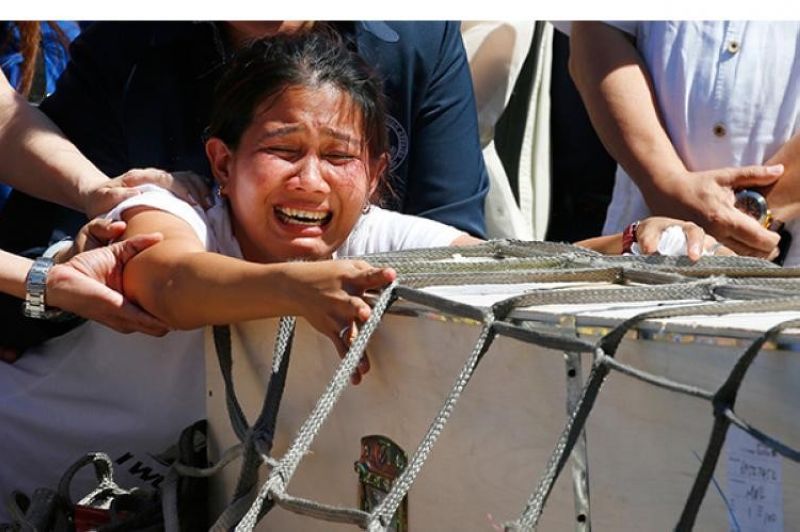 MANILA. A relative of murdered overseas Filipino worker Joanna Demafelis wails upon the arrival of Demafelis's remains in 2018. (File Photo)

PRESIDENT Rodrigo Duterte on Thursday, November 28, ordered the Department of Labor and Employment (Dole) and Department of Social Welfare and Development (DSWD) to come up with a structure designed to go after illegal recruiters of young Filipino women who end up becoming modern-day slaves in the Middle East.

"My orders are really to get them (recruiters). You should know where to fish for them and return them to the water, because they are fish," Duterte said in his speech during the awarding ceremony for the 2018 Presidential Award for Child-Friendly Municipalities and Cities at the Malacañan Palace on Thursday, November 28, 2019.

He pointed out that illegal recruitment is a non-bailable case.

In another speech during the awarding of the 2019 Model Overseas Filipino Worker (OFW) Family of the Year Award, Duterte warned recruiters that he considered them to be in the same league as drug dealers.

"Kayong mga recruiter, I am putting you on the same level as (those engaged in trading) shabu," he said.

In his first speech, Duterte recalled that when he was mayor of Davao City, three mothers related to him how their daughters were recruited to work in the Middle East. The three women lamented then that they had not heard from their daughters for four or five years. The girls were then aged 16 and 17.

Duterte warned that slavery is still allowed in the Middle East and some Arabs still practice this.

A Filipino woman hired as a household helper for one family often ends up providing household services to other family members of her employer, Duterte said.

In modern-day slavery in the Middle East, the President said "sexual abuse is always part of the territory."

"That's the reason why some of our countrymen just jump out of the window. They could not endure the degradation," Duterte said.

In 2018, Duterte ordered the Dole to enforce a total deployment ban of Filipino workers to Kuwait, following the brutal death of OFW Joanna Daniela Demafelis, who was found stored in a freezer in an abandoned apartment in the Arab nation.

The ban was later lifted, after the Philippines and Kuwait reached an agreement ensuring a more humane treatment of OFWs.

The Philippine Statistics Authority (PSA) reported in April 2019 that there were about 2.3 million overseas Filipino workers (OFWs) from April to September 2018.

One out of four, or 24.3 percent, OFWs worked in Saudi Arabia, which remained to be the top destination of OFWs during the period under review.