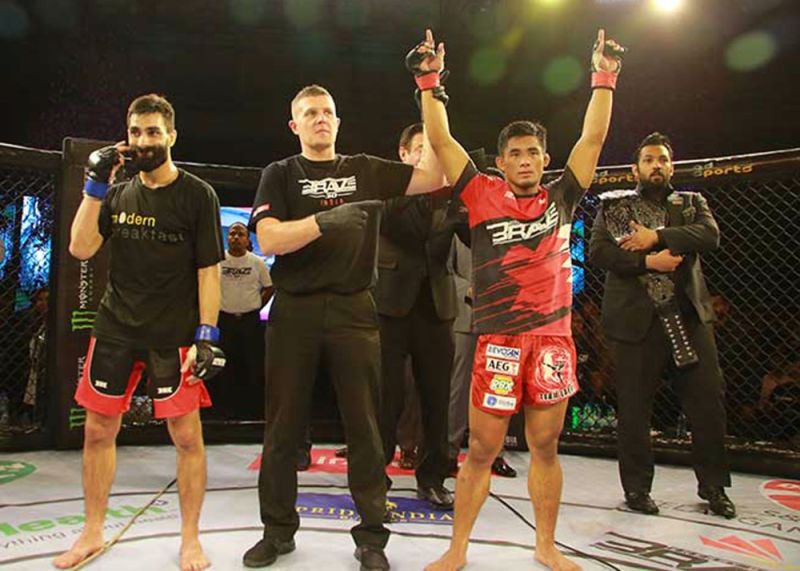 INDIA. Despite a spirited challenge from Louie Sanoudakis, Stephen Loman defended his bantamweight title for the fourth time in the main event of Brave Combat Federation 30 in Hyderabad, India. (Brave CF photo)

The University of the Cordilleras BS Criminology graduate first earned the bantamweight world title when he defeated Gurdarshan Mangat at BRAVE 9: The Kingdom of Champions at the Khalifa Sports City Arena in Isa Town, Bahrain in November 2017.

In June 2018, Loman retained his title by defeating Frans Mlambo of Ireland in a rematch at “Brave 13: European Evolution” in Belfast, Northern Ireland.

His reign would continue when he scored another decision against Felipe Efrain in November 2018 at “BRAVE CF 18” at the Khalifa Sports City Arena.

Loman’s most convincing title defense was in March earlier this year when he knocked out former Brave CF featherweight world champion Elias Boudegzdame of France at “BRAVE 22: Storm of Warriors” at the SM Mall of Asia Arena in Pasay City.

“Loman is from the well-known team worldwide, Team Lakay, and is an inspiration to all athletes and brought prestige and honor to the City of Baguio, to the Cordillera Region, and the country as a whole,” the resolution reads.