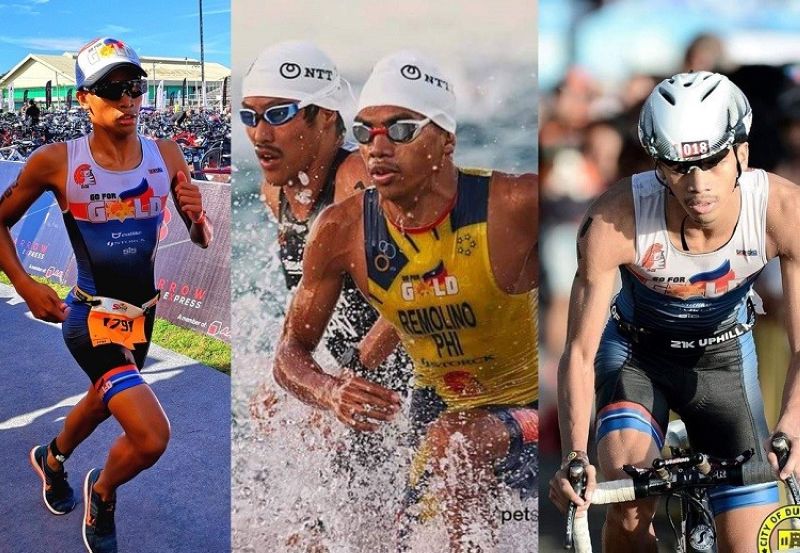 Triathlon will be the first medal event for the 30th SEA Games with the race starting at 6 a.m., or about 10 hours after the grand opening ceremony at the Philippine Arena in Bulacan.

The PHL Team will also have John Leerams Chicano on the men’s side, while seeing action in the women’s division are Kim Kilgroe and Marion Kim Mangrobang for the individual race, which covers a 1.5-kilometer swim, 40K bike and 10k run.

The Philippine side has dominated SEA Games triathlon in the past two editions, with Nikko Huelgas winning gold medals in the 2015 Singapore Games and in the 2017 Kuala Lumpur Games. Huelgas did not make it to the team this year after a series of qualifying races done by the Triathlon Association of the Philippines.

With big shoes to fill, the 19-year-old Remolino from Talisay City, Cebu said he feels nervous but at the same time excited for his first SEA Games competition.

“Nikko (Huelgas) has a win streak going. So there’s that pressure that we should keep it going for the country,” Remolino told SunStar Cebu.

Remolino is confident that he’s left no stone unturned in preparation for the biennial meet. He did his training solely in Cebu.

“My training went smooth in Cebu. We completed everything before coming here,” he said. “I get my confidence during training. I trained hard so I can overcome the challenges during the race.”

Remolino’s father and coach, Roland, felt the training they did in Cebu was enough to give them a fighting chance for that coveted gold medal.

“We are already 100 percent ready,” declared the older Remolino.

Meanwhile, more than 40 Cebuanos will also see action in the 11-nation sporting meet.

Mary Joy Tabal will go for a back-to-back in the women’s marathon, Kiyomi Watanabe fights for her fourth SEA Games medal in judo, while Asian Games gold medalists Margielyn Didal and Lois Kaye Go will gun for no less than a gold medal in street skateboarding and golf, respectively.