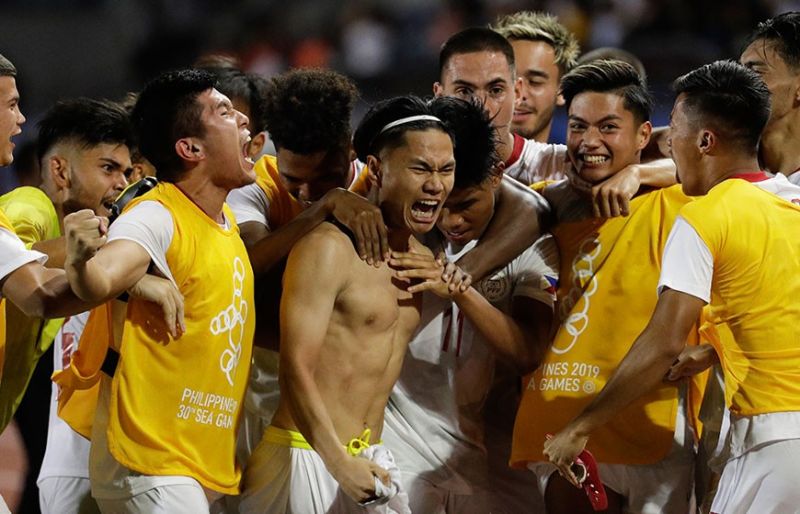 LATE DRAMA. After an injury time equalizer in the first game against Cambodia courtesy of Dennis Chung (left) the Philippines beat Malaysia, thanks to a 72nd minute goal by Stephen Schrock. (AP photo)

TWENTY-EIGHT years after a stunning upset and 14 years a home disappointment, the Philippines finally beat Malaysia, 1-0, to keep its hopes of a semifinal chance alive in the Southeast Asian Games.

The win was extra special as on the same night in Biñan, the Malditas pulverized Malaysia, 5-0, to barge into the semifinal round of the women’s competition.

Over at Rizal, the Azkals played like a well-oiled machine, taking the fight to Malaysia which spent most of the first half back tracking.

In the second half, the Philippines finally got its breakthrough, with captain Stephen Schrock sending his corner swerving in to the Malaysia goal in the 72nd minute. Defender Amani Aguinaldo also helped as he was rushing in while the Malaysian keeper was trying to parry the ball off.

Also needing a win, Malaysia threw bodies forward but the home team managed to hold them off and scored just its second win over Malaysia since the 1991 SEA Games. In 2005, Malaysia ended the Philippines’ semifinal bid with a 4-2 win.

“The players and coaches have been working so hard on and off the pitch, they deserve that victory. In the first two games against Cambodia and Myanmar, we could see glimpses of what the team was capable of already. I think it’s safe to say that our performance has proven that our U22s are not the whipping boys of the SEAG tournament anymore,” said team manager Dan Palami.

The win puts the Philippines at four points, and they need to win comfortably against Timor Leste on Dec. 4 to seal a top two finish.

Meanwhile, it was a different story in the women’s game as the Philippines totally dominated Malaysia with Sarina Bolden completing a first half hat trick as the Malditas took a 4-0 lead at half time.

Bolden got the first goal in the 24th while Alisha del Campo doubled it minutes later. Bolden added two goals in the 41st and 45th to complete the hat trick, while Eva Madarang got the final goal deep in injury time. (ML)