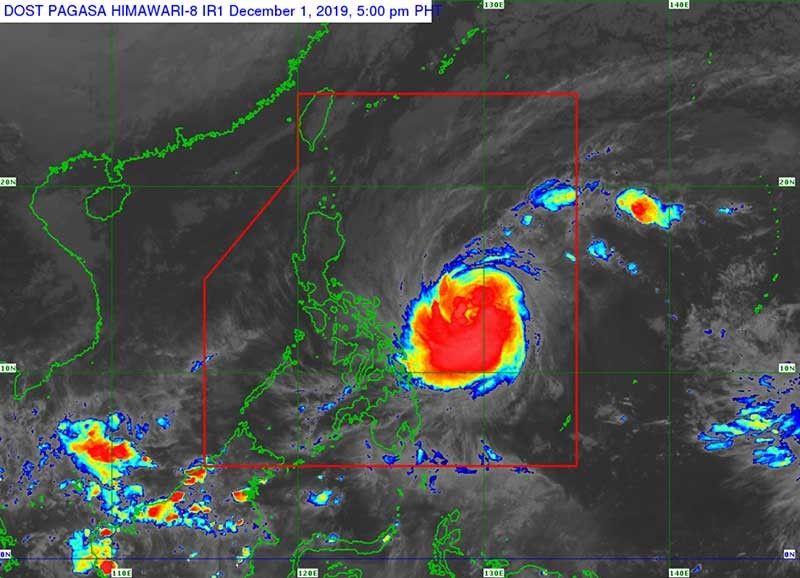 NORTHERN and Metro Cebu, Metro Manila and several other areas in Luzon and the Visayas were placed under Tropical Cyclone Wind Signal No. 1 as Typhoon Tisoy (international name Kammuri) inched closer to the country.

Areas under TCWS No. 1 can expect winds of 30 to 60 kilometers per hour (kph) in the next 36 hours. At this speed, wind can break tree branches and damage structures made of light materials. Pre-school classes are automatically suspended.

The typhoon is forecast to cut a wide swath through Luzon and central Philippines. Areas under TCWS No. 1 are:

Four more provinces, meanwhile, have been placed under TCWS No. 2 in addition to the three areas listed in a previous Pagasa advisory. The provinces of Camarines Sur, Catanduanes, Albay, Sorsogon, Northern Samar, Eastern Samar, and Samar may experience winds of 61 to 120 kph in the next 24 hours.

Such strong winds can topple utility posts, cause banana trees to lean and even rip off roofs, state weather bureau Philippine Atmospheric Geophysical and Astronomical Services Administration (Pagasa). Classes from pre-school up to high school are automatically suspended.

As of 4 p.m. Sunday, December 1, Typhoon Tisoy was located at 595 kilometers east of Virac, Catanduanes.

It has maintained its strength, packing maximum sustained winds of up to 140 kph near the center and gustiness of up to 170 kph.

It slowed down a bit as it continued to move westward at 20 kph.

The weather bureau earlier warned residents of Bicol and Eastern Visayas regions of flooding because Tisoy is expected to bring heavy rains.

Between Monday afternoon and Tuesday morning, continuous heavy to intense rains may be expected over Bicol region.