Philippines storms ahead in Day 1 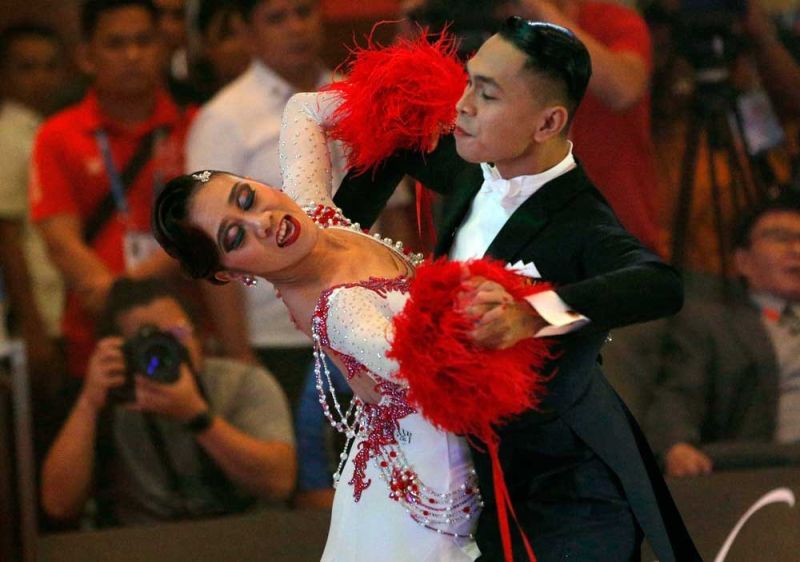 MULTIPLE WINNERS. Mark Jayson Gyon and Mary Renigon won two golds for the Philippines in dancesport, an event usually dropped by other hosts to offset the advantage of the Philippines. AP FOTO

The Pinoy triathlete ushered in the Philippines Day 1 haul after leading a 1-2 finish in in the men’s triathlon event of the Southeast Asian (SEA) Games.

As of 5 p.m., the Philippines led the medal tally with 14 gold medals, six silvers and four bronze medals.

Brunei, which was supposed to host this year’s event but begged off, is sixth at 1-2-1, while Indonesia is at seventh at 0-2-3.

Arnis and dancesports--two events usually dropped by other sports to offset the Philippines’ advantage--delivered big time on the first day with nine gold medals.

The arnis team, which is hoping to sweep all 20 gold medals in the meet, earned four golds after Dexler Bolambao, Niño Mark Talledo, VIllardo Cunamay and Mike Bañares won their live stick competitions.

The other gold medalists for the Philippines on the first day were Agatha Wong in wushu and the men’s team in sepak takraw.

The Philippines is hoping to win its first overall title in the SEA Games since 2005, which it also hosted. So far, the the country is on track and at 14 golds, is already 10 less than its total output in 2017, when it finished at sixth overall with a medal tally of 24-33-64. (ML)