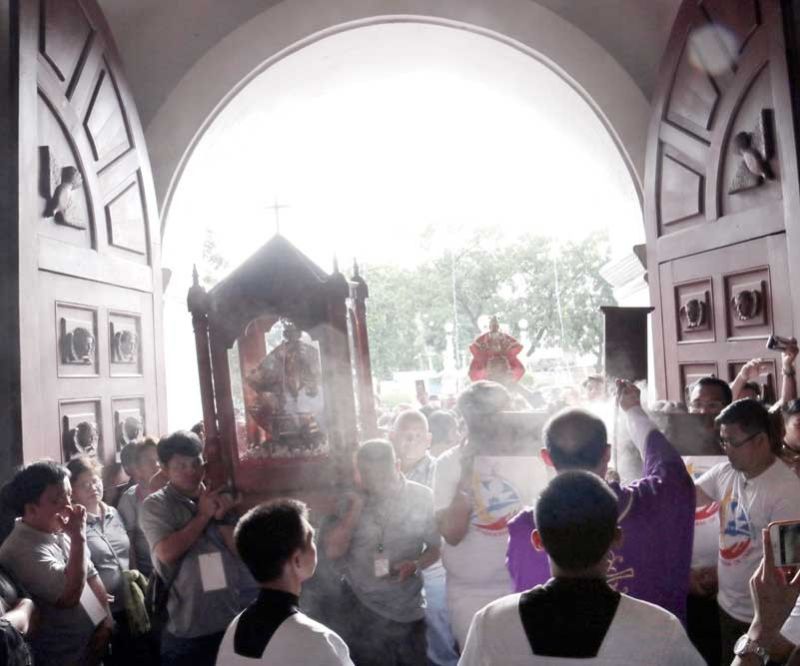 COUNTDOWN: A foot procession takes the replica of the Magellan’s Cross made of tindalo wood and the image of the Señor Sto. Niño to the Cebu Metropolitan Cathedral, seat of the Cebu archdiocese, on Sunday, Dec. 1, 2019, to mark the countdown to the 500th year of Christianity in the Philippines on April 14, 2021.

THE countdown to the 500th year of Christianity in the Philippines in 2021 has begun.

Cebu Archbishop Jose Palma, after celebrating a mass, led the unveiling of the countdown clock in front of the Magellan’s Cross at the Plaza Sugbo in Cebu City on Sunday morning, Dec. 1, 2019.

He was with Mayor Edgardo Labella and Vice Mayor Michael Rama.

The mass was attended by around 2,500 devotees, according to the Waterfront Police Station.

The main date of the quincentennial anniversary of Christianity in the Philippines will be on April 14, 2021. On that day, a reenactment of the first baptism in Cebu will happen.

In 1521, the fleet of Spanish ships led by Portuguese explorer Ferdinand Magellan reached the archipelago, which was then populated by a multitude of tribes led by their respective chieftains. On April 14, 1521, the Spaniards succeeded in converting Cebu’s Rajah Humabon, his wife and subjects to Roman Catholicism.

In his homily, Palma said Christians must renew their faith. Cebuanos, he said, must also welcome their fellow faithful who will visit Cebu during the quincentennial anniversary and Sinulog in January 2020.

“It is an opportunity to be reminded that God comes to visit us and the visit of God brings graces,” Palma said.

The Archdiocese of Cebu has prepared a series of activities on days leading to the April 14, 2021 event.

A replica of Magellan’s cross made of tindalo wood was blessed on Sunday. The cross was named as the 2021 Jubilee Cross; it will visit 500 parishes of archdioceses in Cebu and other parts of the country.

After the blessing, a foot procession followed. The tindalo cross and the image of the Sto. Niño were taken first to the Cebu Metropolitan Cathedral, the seat of the Archdiocese of Cebu. (JCT)