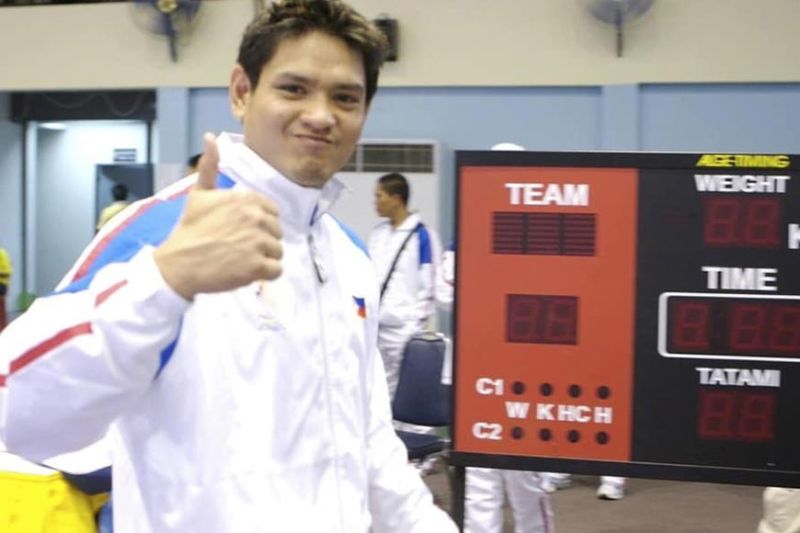 And helped out by a little booze, the now Australian citizen Pabillore turned nostalgic as he mingled with childhood friends and talked about "anything," including the ongoing 30th Southeast Asian Games the country is hosting from November 29 to December 11.

"I'm already disconnected with the Philippine sports but at heart I love our country and support the Filipino athletes' pursuit for glory. Gusto gyod nako motan-aw sa opening ug sa mga dula pero dili kaya sa bulsa (I want to watch the opening and actual games of the biennial meet but it's costly for now it's hard to afford)," said Pabillore.

Obviously, his friends understood as he just threw a party to go along with some of his money hardly earned from afar.

The SEAG karatedo event that once glorified the Pabillore kin of Cagayan de Oro now goes in full throttle at the RMSC Basketball Coliseum in Metro Manila.

"Maybe, the young generation of athletes today have no idea of our karatedo exploits in the past. Me, Marna and our sensei Kakay. But I wish them luck and encourage them to rally behind Philippine sports development," the baby-faced Joey (as friends fondly call him) barely warmed up.

"Yes, I've heard the story about the P55-million worth of cauldron. The towering structure that would keep the SEA Games' symbolic flame burning for 11 days in main stadium Clark...I've read it in the newspapers. During my time and until now padayon gihapon ang mga kontrobersiya. Political struggle affects Philippine sports as well. Sayang atong karate, but athletes should not allow these troubles to get into their psyche and stop them from pursuing a mission to excel and serve the country well."

For the uninitiated ones, Jose Mari "Joey" Pabillore was the "light" of Philippine sports tormented by leadership squabbles in 2001 when he delivered the country's first gold in men's 80 kg. kumite during the Kuala Lumpur SEAG.

Joey, who won 2 more silvers and a bronze, considered his bronze finish in SEAG 2005 in Cebu City as his most memorable one.

With only 15 seconds left and Joey slightly up in the judges' scorecards, his Indonesian foe in the semifinals Umjar Syarlef managed to score a clean kick to the body for the sudden reversal of fortune.

But he never regretted it.

More than the agony of defeat, however, was the grief suffered by Joey and Marna when the family-owned Youth Development thru Karatedo (YDKA) gym in Carmen was gone for good.

Kakay's "iron fist" approach towards coaching and the rebellious attitude of Joey and Marna against their master controller were both considered as contributory factors to the YDKA gym's fell from grace.

Eventually, it is also the thick "wall of pride" that disconnected Kakay, Marna and Joey from each other.

For around 10 years now, Joey confided "we did not see nor talk to each other. Walay communication."

It also takes a decade-long separation for Joey to understand Kakay's method of coaching and controlling ways.

"A great deal of discipline. Grabe, dili kayahon sa ubang disciples outside the family. But I realize that it was her own very unique and extreme way of preparing us to become champion athletes," said Joey, who admitted he misses Kakay and Marna so much for a get-together and mend broken fences.

"She's (Kakay) living now in brgy. Kauswagan, Cagayan de Oro. I don't know when but I really want to visit her before my trip back to Australia this month with my wife," Joey said, adding "though its next to impossible, I hope that our warring leaders in sports and Philippine politics will do the same for us to become a great nation."

In the City of Gold, the Pabillores are reputedly the biggest brood of sporting family with class and quality.

back-up pointguard then of future PBA legend Johnny Abarrientos with the FEU Tamaraws.

"But Kakay, Marna and Joey were the best. Kakay did home cooking in honing bemedalled national karatekas right in her own gym in Cagayan de Oro instead of the PSC's (Philippine Sports Commission) training ground in Manila. Marna was like Cynthia Luster iyang silver sa Asian Games dili basta-basta and Joey the Michael Jordan then of Philippine Martial Arts," summed up Anton, famous for his backcourt tandem with FEU Tamaraws teammate and future PBA legend Johnny Abarrientos.