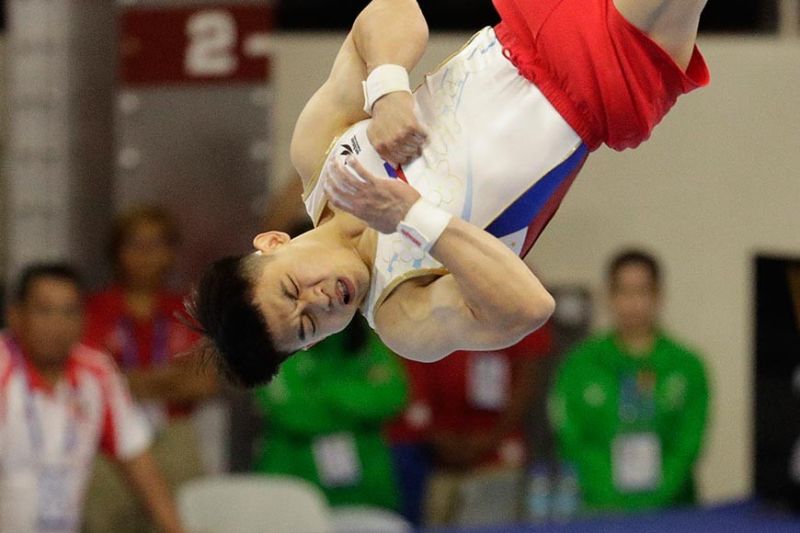 DOMINANT. Carlos Edriel Yulo added a gold medal for the Philippines after a dominant showing in the men’s artistic gymnastics individual all around event. (AP photo)

The Philippines asserted its supremacy in basketball in the 2019 Southeast Asian Games (Seag), sweeping the men’s and women’s gold medals in 3x3.

In the women’s division, the Philippines made up for an earlier loss against Thailand in the preliminaries with a 17-14 win in the final to add another gold medal for the country.

The Philippines, which lost to Thailand, 22-20 in overtime in the preliminaries, advanced to the final after beating Vietnam, 21-12, in the semis.

In the men’s side, CJ Perez, Mo Tautuaa, Chris Newsome and Jason Perkins completed their dominance as they went over the field, punctuating their run with a 21-9 win over Indonesia in the final with some 2:25 left in the game.

In the semifinal, the Philippines also routed Thailand, 21-11.

Meanwhile in tennis, the Cebuana Lhuillier-backed PHL Blu Girls’ title defense in the ongoing Seag is off to a flying start after beating Singapore 6-0.

“I’m confident of the girls’ chances of winning the SEAG gold medal again. They are well-prepared for this tournament,” said Jean Henri Lhuillier, president of Cebuana Lhuillier and Asaphil.

The PHL Blu Girls has made waves the past three years in the world stage with impressive performances in the World Cup, Canada Cup, and Asian Championships boasting of victories over top 10 teams such as Australia, Canada, China, Chinese-Taipei and Mexico, among others.

“The girls played well today especially in our defense. We’re all confident we will be able to retain the gold medal in front of our countrymen. Sir Jean Henri Lhuillier has given everything we need to prepare the whole team for this battle,” said RP Blu Girls head coach Randy Dizer.

In tennis, the Philippines opened its campaign with a bang as Treat Huey and Niño Alcantara delivered contrasting mixed doubles with their partners in opening day.

Alcantara and Khim Iglupas survived an earlier scare from the Vietnamese pair of Quoc Khanh Le and Savanna Ly Nguyen, with their hard fought down-the-wire 3-set win at the mixed doubles in court one, 6-7, 6-3, 11-9.

Meanwhile, Huey and Denise Dy had a comfortable opening day win against Cambodia, 6-1, 6-4. (ML with PR)