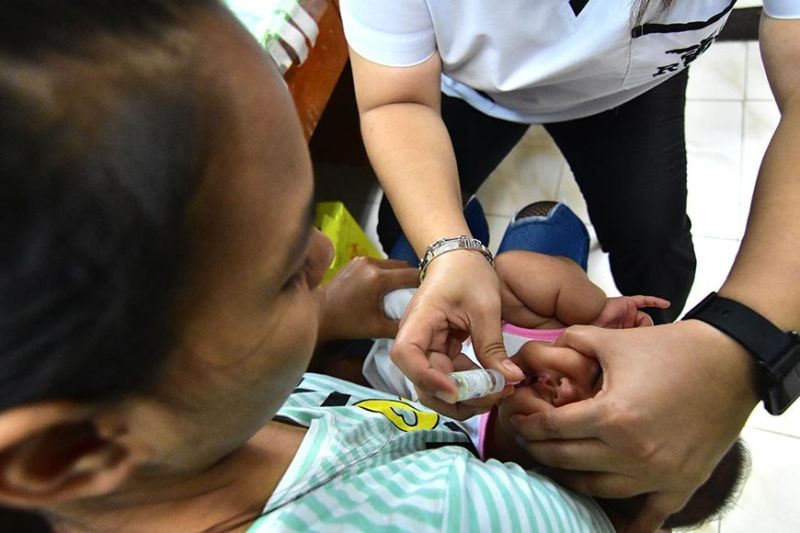 DAVAO City has already hit a 96.75 percent immunization coverage on the first week of the second round of the citywide polio mass vaccination.

The City Government, through the partnership of the Department of Health (DOH), Davao City Health Office (CHO), and World Health Organization, launched the second round of the Sabayang Patak Kontra Polio on November 25, wherein 186,864 individuals, composed of children from zero to 59 months old, will be given the oral polio vaccine type 2 (OPV2).

As of December 1, the CHO recorded a total of 180,785 children who were given the OPV2 vaccine.

But CHO technical division chief Dr. Julinda Acosta clarified that it is still a partial count, as data from the Paquibato and Tugbok districts have not yet been submitted to the health office.

She said there is a possibility that it would reach more than 97 percent once the numbers are consolidated.

Previously, the health official said that having more than 95 percent immunization coverage already guarantees the protection of the children from the possible virus infection.

During the first round of immunization, which was conducted from October 14 to October 27, Davao City recorded a 99.48 percent immunization coverage, or a total of 185,901 children.

Acosta said the concerned health agencies used the same strategy applied during first round of the mass vaccination. Synchronized immunization was conducted in all health centers and house-to-house visits in all barangays in the cities.

She said OPV2 vaccines were also distributed to other venues, such as private hospitals, malls, schools and churches.

She added that they also deployed health workers to the Davao City Overland Transport Terminal, seaports, and all entry checkpoints in the city.

"The reason why we deployed our health workers there is to cover all those who are coming to Davao City. Baka pagpunta nila dito sa city, hindi sila immunized doon sa kanilang probinsya (There's a high chance that those who enter the city from the nearby provinces are not immunized). Even those

going outside the city, they should be immunized," Acosta told SunStar Davao on Monday, December 2.

She said in a previous report that even those from neighboring areas who wish to have their children immunized will be catered.

Acosta said most parents have been "submissive" on the second round, as compared the previous rounds.

But she added that there are still parents who still refused to have their children immunized.

She said the health office will continue to convince these parents, as it is important to give them three dosages of the OPV2.

The citywide mass vaccination was in response to the DOH-declaration of a polio outbreak in the country. The type 2 sample of the virus was traced in a portion of the Davao River.

Acosta, meanwhile, encouraged parents to go to the nearest health centers, where vaccines are given for free.

She also reminded them to have their children vaccinated.