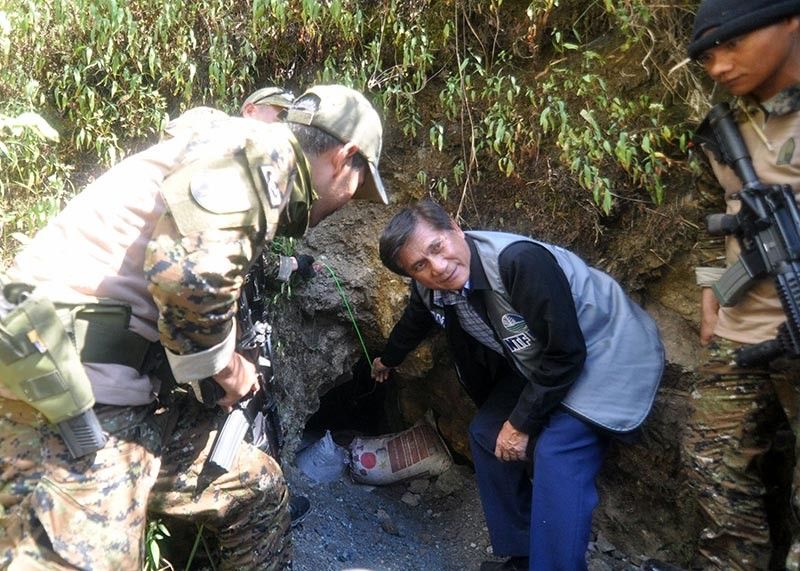 SMALL-SCALE TUNNEL. Environment and Natural Resources Secretary Roy Cimatu along with military personnel inspects one of the mine tunnels at the Philippine Military Academy reservation during his visit in Baguio City in 2018. Baguio representative Mark Go recently filed House Bill 5619 which seeks to declare the city a mining-free zone in response to the growing geohazards and environmental threats in the city. (SSB file photo)

BAGUIO City representative Mark Go recently filed a bill which seeks to declare the city a mining-free zone in response to the growing geohazards and environmental threats within the Summer Capital.

Once passed into law, House Bill (HB) 5619 would effectively ban all mining activities within the city’s territorial jurisdiction, including small-scale mining and quarrying.

Violators will face a penalty of imprisonment between one to six years, and a fine between P500,000 to P5 million.

Go added Baguio City’s reputation for its natural sceneries and heritage has become compromised with the mining activities taking a toll on the city’s sustainability and environmental preservation efforts.

Baguio City has two mineral reservations by virtue of two proclamations by former President Carlos Garcia, excluding them from the Baguio Townsite Reservation: a 380-hectare area in barangays Laokan Apugan, Atok Trail and Kias under Proclamation 414 s.1957, and 159 hectares of land covering barangays Mines View and Lucban through Proclamation 572 s.1959. Upon enactment into law of this bill, these two proclamations will be repealed.

Go said small-scale mining and other activities have been prevalent in these areas for decades since they were declared as mining reservations. The reservations have also been heavily populated with inhabitants that they no longer serve their purpose as mining areas.

The lawmaker also added that sinkholes have been reported in these areas, making them geohazard areas that could endanger the lives of the people and harm the city’s ecosystem.

Go said that the irreparable damage that mining causes to the environment outweighs the potential benefits to its host community. (SunStar Baguio)