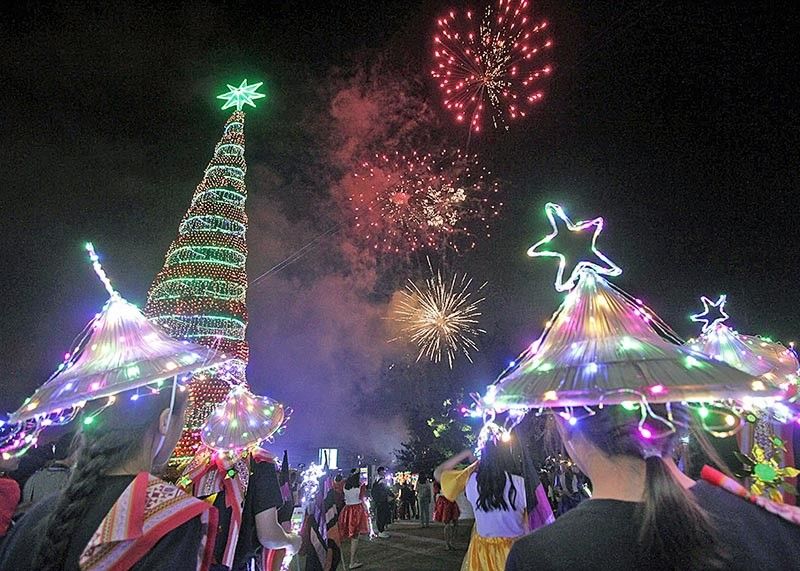 A DISPLAY of lights and color ushered the opening of the Enchanting Baguio Christmas.

The lighting of the city’s Christmas tree with the simultaneous illumination of the entire stretch of Session Road signaled the start of the December celebrations over the weekend.

Baguio Mayor Benjamin Magalong with the city officials and the Baguio Tourism Council (BTC) led the lighting of the towering poinsettia laden tree atop Session decorated with red and green lights as the Saint Louis University (SLU) dazzled the waiting crowd with their annual lantern parade.

The lantern parade set the tone for the night as different groups paraded a spectacle of lights and shapes down the street which ended with a field demonstration at the Baguio Athletic Bowl.

The lighting of Porta Vaga façade with establishments along the American inspired road added to the show of lights adding to the festivities to usher the highland Yuletide.

Pastor Abe Luis led the prayers with Fr. Marlon Urmaza and Fr. Mark Batolne of the Diocese of Baguio and Porta Vaga giving their message for the seasons.

Lighting decorations at the main thoroughfares were shaped like pinecones and pine needles to depict the city scenes.

The celebrations were led by the BTC which came up with the “An Enchanting Baguio Christmas,” 40-day celebration with its center point at the Rose Garden which was transformed into a Christmas village.

The Silahis ng Pasko activities also started with a parade Sunday morning with 4,000 children in costume walking down to Burnham Park with this year’s Santa, Fritz Padilla continuing the legacy his father, Nars Padilla which started 46 years ago.