Preparations up for 'Tisoy' 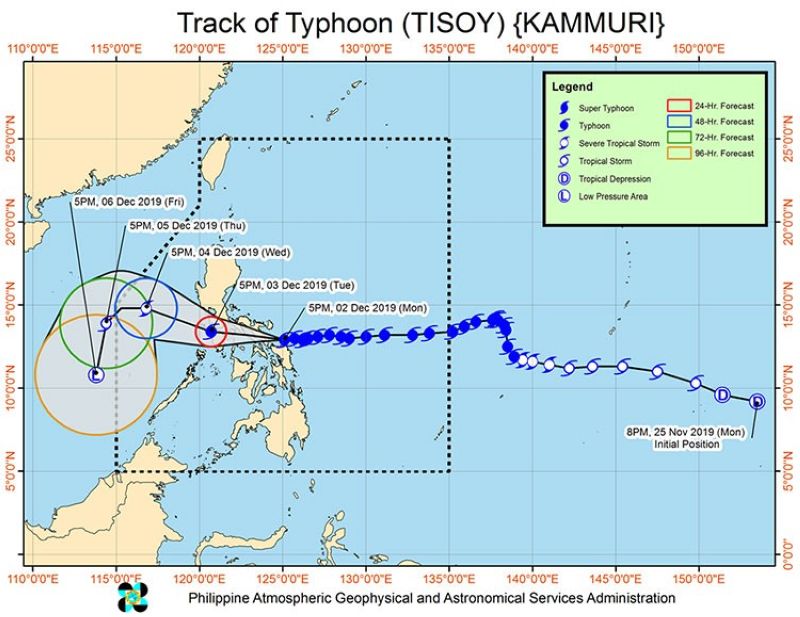 Track of Typhoon Tisoy as of 7 p.m. Monday, December 2. (Pagasa)

Governor Dennis Pineda ordered all members of the Provincial Disaster Risk Reduction and Management Office (PDRRMO) to set up all contingency measures and propositioning of resources in anticipation of the incoming typhoon.

He ordered task groups in place for the possible evacuation of upland communities in Arayat, Porac, Floridablanca, and Mabalacat City.

"I am also asking our personnel to prepare food packs and other equipment in case of evacuations," Pineda said.

He had also asked local disaster response teams in various municipalities to be on alert and preposition all possible resources in case of emergencies.

As of 7 p.m. Monday, December 2, the eye of Typhoon Tisoy was located at 90 km east of Juban, Sorsogon with maximum sustained winds of up to 165 kilometers per hour (km/h) and gusts of up to 230 km/h. It was moving west at 20 km/h, said Pagasa.

As of Monday evening, Pampanga had been placed under Tropical Cyclone Wind Signal 2 and is expected to experience moderate to heavy rains starting December 3 until December 4.