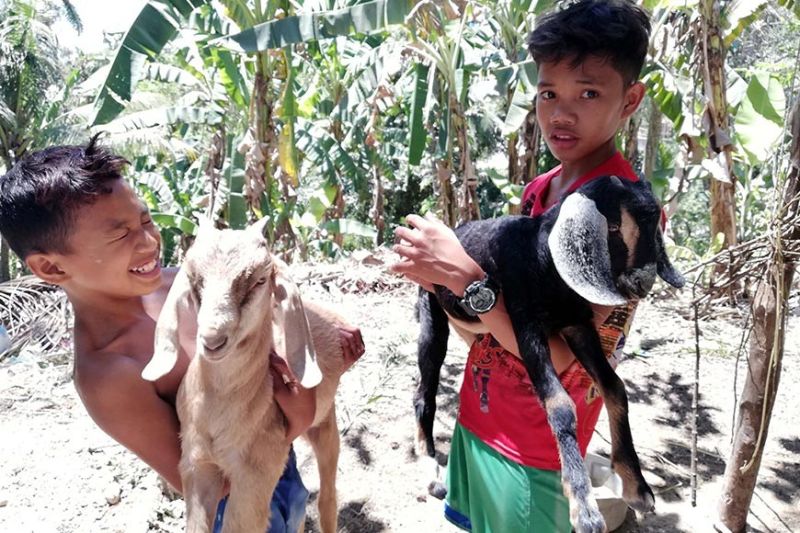 GOAT’S GRACE. The children of Rolando Sasil help their parents raise goats as this can help augment their family’s income. (Contributed photo) 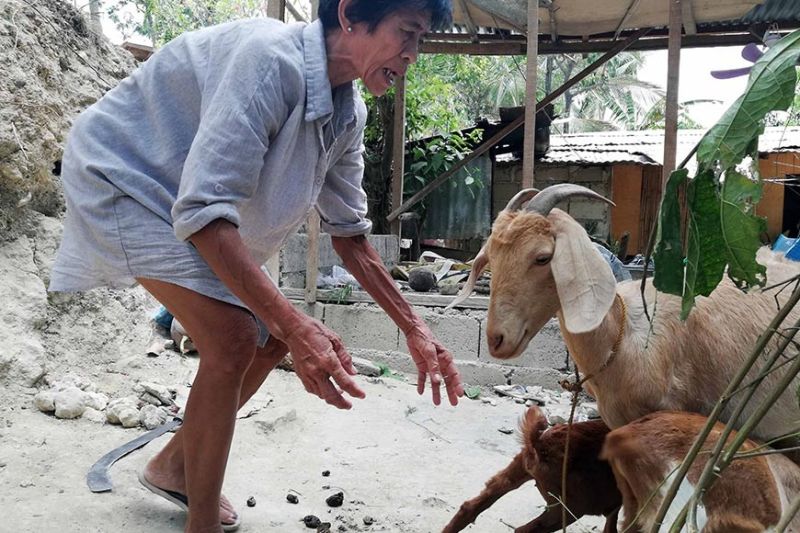 This was the sentiment of several families in San Fernando town, Cebu, including the family of Sabiniana “Sabing” Sasil, 66.

Most of her life, Sasil spent taking care of her children, now aged 44 and 23, and her grandchildren—most of whom have grown enough to attend to themselves and be independent.

“Kanunay kong nag-atiman nila gikan sa akong pagmata hangtud nga sila nahinanok na ug ako matulog na sab (I always attended to them after I woke up. I cared for them until everyone went to bed. Afterwards, that’s the time for me to go to sleep),” she said.

Sasil said it was her daily routine as a housewife in Barangay Tinubdan, a mountain village.

As a member of HFA, Sasil received a doe of the Anglo-Bower breed, one of the seven goats that TCPI gave on top of the four female goats—offspring of the first batch of goats given to the beneficiaries of the livelihood program facilitated by Tinubdan barangay officials.

By February 2019, Sasil’s doe had borne three kids. Though one died shortly after birth, she took care of the surviving two young goats and their mother, making sure they were fed on time and their shed was always neat and clean.

Sasil’s relative Rolando, 52, used to drive passenger jeepneys until he had a stroke a few years back. He felt helpless, sometimes even useless, as he could no longer be his family’s breadwinner.

Rolando mostly spent his time watching the sunrise and sunset. However, his life took a turn in June 2017 after HFA chose Rolando’s member wife as among the first beneficiaries of the group’s goat-raising livelihood program, which made him find a new meaning and a new purpose to embrace life again.

The couple’s teenage sons Orlando Jay and Vince Laurence often helped in gathering legumes. The family raised a doe that has since produced two sets of male and female kids.

Rolando had given a doe back to HFA. He is also about to hand over a second doe to complete and accomplish his commitment in the dispersal program.

As he had sold a buck for P2,000, Rolando plans to breed more goats with his wife and sons’ help with a dream that they would one day maintain a herd and perhaps supply a good buyer with a good steady source of meat for kaldereta.

HFA beneficiaries with new adult does only need to approach another member of the Sasil clan—Ludivico—to have these mated with a strong and sturdy Anglo-Bower breeding buck. A single mating session costs only P50.

Elsa said does bear kids two to three times a year, and a doe may already be mated to further produce more offspring when one is about six to seven months old. It takes some 18 to 22 days to find out if a mated doe will conceive.

TCPI funded the goat-raising livelihood program under its Social Development Management Program with a commitment by HFA member-beneficiaries to provide forage and house shed for the goats.

The company previously provided the same assistance to Sitio Suico Farmers Association in Barangay Tonggo, San Fernando with 12 goats, a spin-off from a four-year project that TCPI undertook in Barangay Bugho that started in mid-2009. Just like before, TCPI provides the medicines and vitamins for the goats, and it works with the municipal agriculturist to visit the livestock for immunization and health concerns. Indeed, raising goats is more than just a livelihood. (Contributed article)