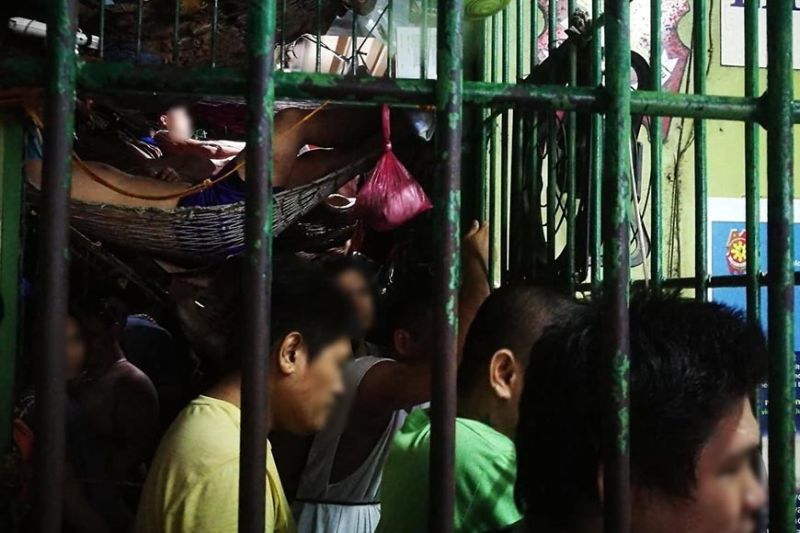 A TIGHT SITUATION. A hammock helps some of the arrested persons stay comfortable inside the Liloan Police Station’s detention cell. For others, standing is the only option. (SunStar photo / Allan Cuizon)

DUE to overcrowding inside the Liloan Police Station detention cell, sleeping has become a problem for its 225 inmates.

The congestion has reached a point where inmates have to take turns sleeping on a shifting scheme devised by the police station chief.

Police Major Danilo Colipano, Liloan police chief, said that because the detention cell built for 50 persons is accommodating four times its capacity, he had to implement a scheme where inmates take turns sleeping every four to five hours.

Colipano said he already sent a letter to the Cebu Provincial Detention and Rehabilitation Center (CPDRC) requesting for the transfer of some of their detainees to the facility in Barangay Kalunasan, Cebu City but the jail management refused.

The CPDRC, too, is full beyond capacity.

Facing the same problem, the Consolacion Municipal Jail also refused to accept the detainees from Liloan since the cell is also full.

The Liloan Police Station has asked help from the Bureau of Jail Management and Penology (BJMP) 7 but it has yet to reply.

“Nagstorya na mi ni Mayor (Christina Frasco). Katong after namo pagpadala sa CPDRC, mao to iyang gisuwayan ug hangyo si governor. Sad to know na wala pud gi approve ni governor tungod kay puno pud ang CPDRC (We already talked to the mayor about this and she tried to appeal to the governor but sad to know, the governor didn’t approve our request since the CPDRC is also congested),” he said in a phone interview.

SunStar Cebu tried to get Frasco’s comment on the police station’s concern but she has yet to reply as of press time.

Jail Chief Inspector Mary Jane Inopia, office-in-charge of the community relations section of BJMP 7, said that even if their facilities are congested, they will accept new inmates provided there is a court order specifying the jail where they should be detained.

Without a court order, they won’t have any basis to accept the inmate, she said.

“If the reason is their detention cell is congested, our facilities will also be congested if we transfer the inmates. But if there is a court order that they will be put in a BJMP facility, then we will accept the inmates,” Inopia said in a phone interview.

Despite the situation in their police station, Colipano assured that security remains tight to prevent any commotion or jailbreak. (JCT, With RTF)