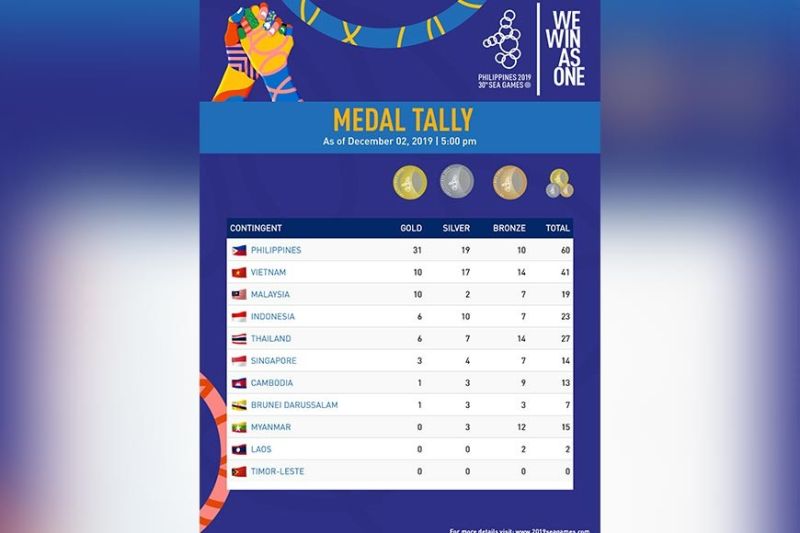 IT TOOK only two days for the Philippines to surpass its total gold medal haul in the Southeast Asian (SEA) Games two years ago in Kuala Lumpur, Malaysia, thanks to a rousing start that saw the host country bag 23 gold medals in a single day.

The host country is aiming to get the overall championship for the first time since it hosted the SEA Games in 2005, which was dubbed as the “2005 Miracle.”

Philippine Olympic Committee president Abraham “Bambol” Tolentino said the Filipino athletes just need to keep the momentum after the dominating start in the 30th edition of the biennial meet.

“Of course that performance from our athletes on Day 1 was very great. With that, you can see the momentum is on our side. Getting 100 gold medals is doable for us,” he said.

The Philippines currently has 31 gold medals, 19 silver and 10 bronze medals and was way ahead of the overall standing as of Monday afternoon.

The Filipinos won a total of 23 gold medals on Sunday, December 1.

Adding to the challenge for the host country would be the presence of Typhoon Tisoy, which is expected to make landfall in Catanduanes, Albay or Sorsogon between Monday night and Tuesday morning, December 3.

Manila and Pampanga, the major venues for the sporting event, were placed under Signal Number 2 on Monday morning.

The organizers said they have mapped out contingency plans if ever the games are affected by the typhoon.

“Few days ago we have already instructed the competition managers to be ready for the contingency plan. This has been in place a long time ago,” Philippine Southeast Asian Games Organizing Committee (Phisgoc) chief operation officer Ramon Suzara said in a press conference at the World Trade Center on Monday.

“We have also instructed the suppliers, especially for the outdoor venues, to set up the tents in advance. The competition continues even if we reduced the tents,” he added, assuring that the competition managers are ready for these situations.

He said there are three major things to look into when the typhoon affects the games.

“We have to monitor (and make sure) that there are not much delays in the games, the safety of the athletes and third is to make sure the competition venues are in place,” said Suzara.

Cebuano athletes have already handed four gold medals to Team PHL; one from Dexler Bolambao in arnis and three from duo Pearl Marie Cañeda and Wilbert Aunzo in dancesport.

Andrew Kim Remolino and Nino Surban handed a silver medal each in triathlon and cycling, respectively.

The weights will be passed on to John Fabuar Ceniza and Elreen Ann Ando as the two compete in the weightlifting event at the Ninoy Aquino Stadium on Tuesday.

National team head coach Ramon Solis, a Cebuano, told SunStar Cebu that his wards are 100 percent ready to compete. He admitted, though, that this will be a daunting task for Cebu’s weightlifters.

“We have prepared well for this tournament. They’re ready. I don’t want to get ahead of something but I’m sure that they will give their all for this competition,” he said.

The former Olympian said the toughest foe would be the weightlifters from Vietnam.

“There are many competitors from Vietnam. There are about 10 of them,” he said.