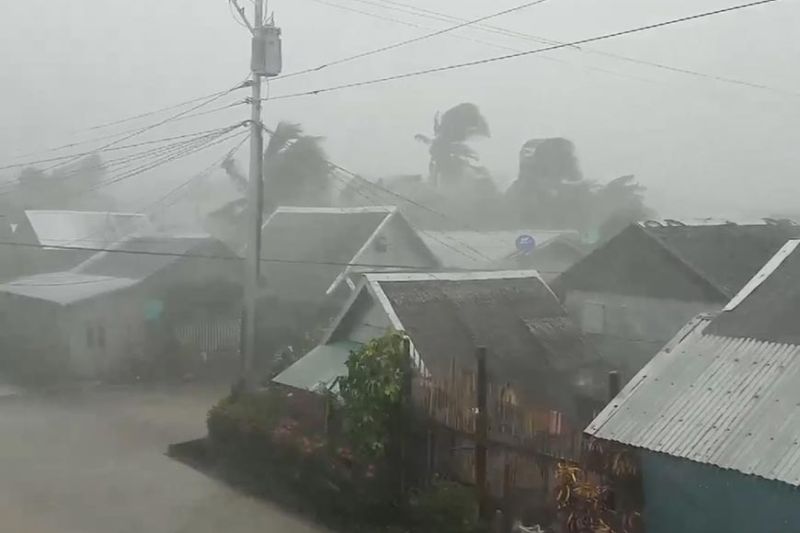 GATHERING STORM. The municipality of Gamay, Northern Samar is buffeted by wind and rain Monday afternoon, Dec. 2, 2019 hours before the eyewall of Typhoon Tisoy (Kammuri) hit the province in Eastern Visayas at 5 p.m. In Cebu, classes remain suspended in many areas Tuesday, Dec. 3, as northern and Metro Cebu have been placed under tropical cyclone wind signal Nos. 2 and 1, respectively. Tisoy has also wrecked travel schedules. (Screengrab from Gladys Castillo Vidal's Video)

WITH Typhoon Tisoy expected to hit land Tuesday, Dec. 3, 2019, the weather bureau has warned of intense rains and violent winds mostly in Luzon.

Domestic and international flights and inter-island boat schedules are cancelled and the Ninoy Aquino International Airport (NAIA) is closed for 12 hours or from 11 a.m. to 11 p.m. today, Tuesday. These cancellations and closure are wreaking havoc to plans of thousands of travelers, including those in Cebu.

Although Cebu is not in its path, Tropical Cyclone Wind Signal (TCWS) No. 2 was raised over northern Cebu and TCWS No. 1 over the rest of Cebu.

Cebu City Mayor Edgardo Labella said there are still no classes Tuesday in kindergarten, elementary and high school, both in private and public schools.

In Mandaue and Lapu-Lapu cities, classes from preschool to elementary in private and public schools are suspended.

Families in coastal communities and low-lying areas were preemptively evacuated at 4 p.m. Monday in anticipation of heavy rains.

Philippine Airlines and Cebu Pacific announced flight cancellations for Tuesday. They advised affected passengers to check updates to be sent to their given contact details. Flights may be rebooked or tickets refunded.

As of 8 p.m. Monday, the weather bureau reported that Typhoon Tisoy is expected to make landfall over Sorsogon and bring violent winds over Northern Samar, Catanduanes, Albay, Camarines Sur, and Sorsogon.

TCWS No. 1 was raised in the cities of Cebu, Danao, Lapu-Lapu, Mandaue, Naga, Talisay and Toledo, and the towns of Balamban, Pinamungajan, Aloguinsan, Cordova, Minglanilla, Consolacion, Liloan and Compostela. Winds of up to 60 kilometers per hour (km/h) are expected in these areas.

A yellow warning level was raised in northern Cebu. This means rainfall of 7.5 to 15 millimeters per hour has fallen or is expected to fall.

As of Monday, there were no reports of casualties.

Several boat trips were cancelled Sunday to Monday, leaving 468 passengers stranded due to the typhoon, the Philippine Coast Guard (PCG) 7 said. The Cebu Port Authority, however, said 650 passengers were stranded in Piers 1 and 3 in the city, Santa Fe-Hagnaya, San Remigio Wharfs, Toledo Port and the Taloot, Argao Wharf. According to PCG 7, those that were not able to sail were 78 rolling cargoes, 71 passenger vessels and 45 motorboats. Trips from Santander in southern Cebu to Sibulan were the only trips allowed to sail Monday.

Mayor Labella gave his side about the criticism he received on social media that he declared the class suspension on Monday late or as students were already on their way to school. He said in a telephone interview: “As of last night (Sunday), Cebu City was not yet declared by (the weather bureau) as under Signal No. 1. Actually, to tell you frankly, I lack sleep because I was monitoring the weather bureau. It was only at 4 a.m. that I was told Metro Cebu is included in Signal No. 1.”