1 dead due to 'Tisoy' in Camarines Sur 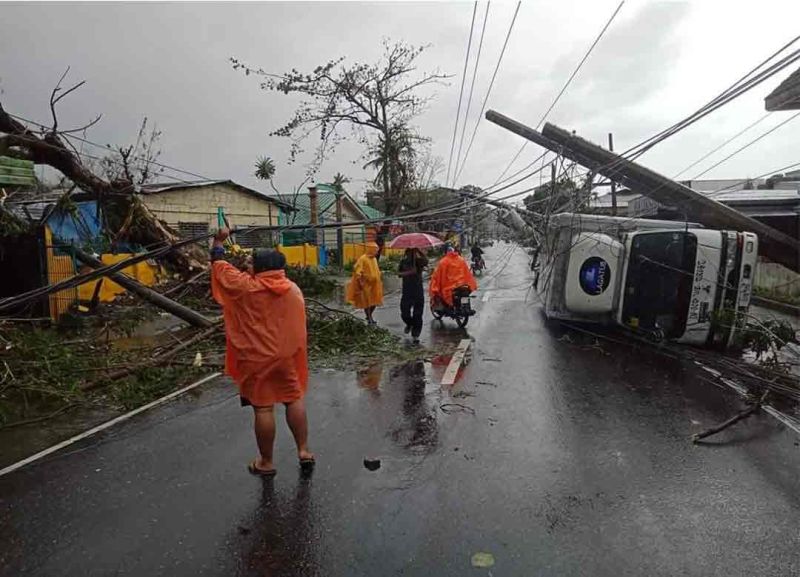 A MAN died after he was electrocuted while fixing his roof ahead of Typhoon Tisoy (international name Kammuri) in Camarines Sur, police said on Tuesday, December 3.

The Libmanan Municipal Police Station identified the typhoon casualty as Marco Paolo Ursua, 33, a resident of Centro B Barangay Loba-Loba.

Police said Ursua fell off the roof into a canal, where he was found dead.

Meanwhile, a total of 455,232 people were evacuated in Albay, Catanduanes, Camarines Norte and Sur, Masbate, Sorsogon and Naga ahead of the typhoon, the Bicol Police Regional Office said.

As of 5 a.m. Tuesday, the regional police office said 22 areas were flooded, particularly in Camarines Sur and Naga, while two road sections in Catanduanes and Naga were not passable due to fallen trees.

A total of 4,093 persons were stranded in the region due to cancelled sea trips.

Typhoon Tisoy made its first landfall at around 11 p.m. Monday, December 2, in Gubat, Sorsogon, according to the Philippine Atmospheric, Geophysical and Astronomical Services Administration (Pagasa).

As of 1 p.m. Tuesday, Tisoy was spotted in the vicinity of Baco, Oriental Mindoro. It had weakened to 140 kilometers per hour of winds, with gustiness of up to 195 kph. It was still moving westward at 25 kph.

An update from the National Disaster Risk Reduction and Management Council (NDRRMC) said 22 houses were damaged, including 13 that were destroyed in Camarines Sur, Apayao and Kalinga.

Ten areas in Apayao, Abra, Quezon, Albay, Catanduanes and Masbate were experiencing power interruption due to the effects of Tisoy. Seven transmission lines were down.

The disaster bureau also said 46 domestic flights were cancelled after the Ninoy Aquino International Airport suspended its operation from 11 a.m. of December 3 until 11 p.m. of the same day.

Some 6,557 passengers, 1,506 rolling cargoes, 138 vessels and 66 motorbancas were stranded in various sea ports due to Tisoy.

A total of 708 cities and municipalities have cancelled classes in schools, including in Metro Manila, the NDRRMC said.

Work, particularly in government agencies in several areas including Metro Manila have been suspended.

The NDRRMC has been on blue alert since Monday while its regional offices in affected areas were on red alert to ensure the continuous coordination of government agencies to ensure assistance to affected population.

Pagasa said the eyewall of Tisoy was bringing violent winds and heavy to intense rainfall over southern Quezon, Marinduque, and Romblon.

The weather bureau, however, lifted the storm signals over Bohol, Siquijor, Southern Leyte, and the rest of Cebu, Negros Occidental and Negros Oriental. (SunStar Philippines)