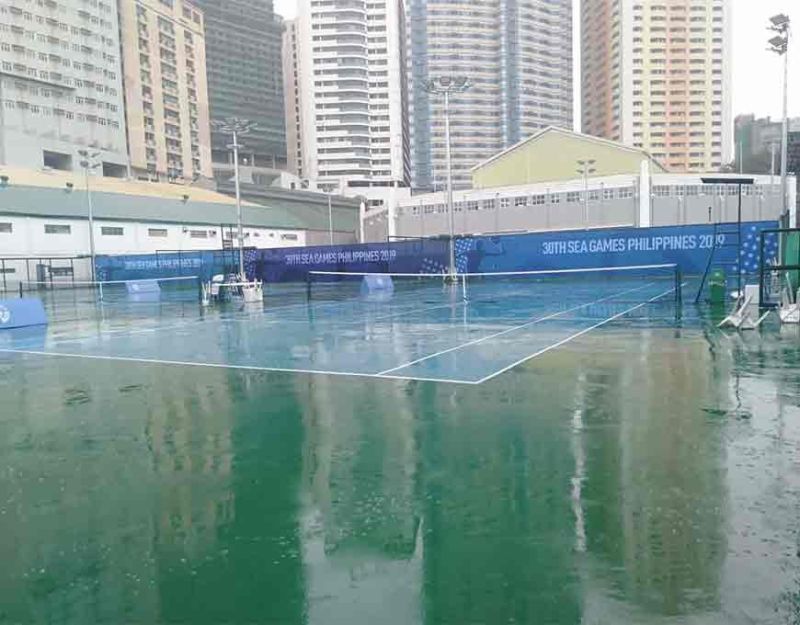 MANILA. Matches were not played as of 12 noon Tuesday at The Rizal Memorial Tennis Center due to the heavy rains brought about by Typhoon Tisoy that made landfall in the Philippines, leaving the courts wet and slippery. (Melchor Anzures)

MANILA -- Typhoon Tisoy, which made landfall over Marinduque at 8:30 a.m. Tuesday, December 3, did not spare the ongoing 30th Southeast Asian (SEA) Games, as some events and matches were either delayed or postponed due to heavy rains and strong winds.

Tisoy was packing maximum winds of 150 kilometers per hour (km/h) near the center and gusts up to 250 km/h.

No tennis matches were played at the Rizal Memorial Tennis Center in Manila as of noon Tuesday, December 3, as the heavy rains left the courts wet and slippery, which could pose a danger to players. Metro Manila is placed under signal number 2.

For his part, SEA Games tennis competition manager Chris Cuarto said in a phone interview that they are still observing the weather condition.

"We are still here. We have not advised any cancellation yet. We are still waiting it out. No matches have been played (so far)," Cuarto said, adding that the next advisory on whether the matches continue will be at 4 p.m.

In its advisory, the Philippine SEA Games Organizing Committee (Phisgoc) said some changes were made in the schedules of the sports competitions due to Typhoon Tisoy.

"We respectfully report on some changes in the schedules of sports competitions of the 30th SEA Games due to the landfall of Typhoon Tisoy in the country," Phisgoc said.

Phisgoc announced suspended and cancelled sports as of 11 a.m. Tuesday.

In the Subic Cluster, beach volleyball games schedule was revised for Monday, December 2, and Tuesday. The canoe-kayak races were rescheduled from Tuesday and December 4, to December 6 to 8.

Muay Thai competition Tuesday will yet start on December 4 to 8, while sailing and windsurfing, which began Monday, will resume on December 5.

In the Southern Luzon Cluster, underwater hockey will be finished before 3 p.m. Tuesday. However, skateboard was postponed while polo matches fo Tuesday were cancelled.

In Metro Manila, ESports training schedule for Tuesday was cancelled.

Phisgoc said they are prepared to “take the necessary precautionary measures to secure the safety of all our guests and athletes.”

“Trust that we have storm-proofed the Games, with several alternate plans queued to ensure that this biennial meet doesn't go beyond its scheduled finish on December 11," it added.

The organizing body also said that they want the delegates to prioritize their security during their stay in the Philippines, wishing that they continue to enjoy the Games "with the authentic spirit of sportsmanship".

Phisgoc chief operating officer Ramon "Tats" Suzara, in a press conference on November 29, said competition managers are ready for the typhoon with expected delays and suspensions.

"We are ready for this. We will brace the storm. All competition managers have prepared a contingency plan. Everything is in place especially for the outdoor sports," Suzara said.