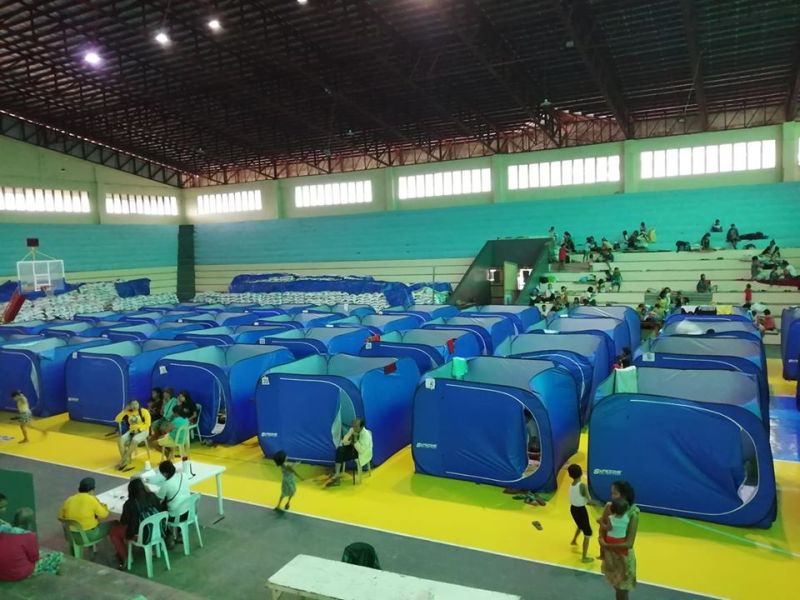 BILIRAN. Residents stay in modular tents for their privacy inside the gymnasium, which served as evacuation center in Naval, Biliran before Typhoon Tisoy hit Eastern Visayas on December 2, 2019. (Photo courtesy of Albert Rain II)

AT LEAST one person was injured in Eastern Visayas Tuesday, December 3, after Typhoon Tisoy (Kammuri) battered some parts of the region before making landfall in Sorsogon.

No fatality has been reported.

At least 21,992 people, however, were evacuated to 1,196 evacuation centers, while 1,871 people have been stranded mostly in Allen and San Isidro ports in Northern Samar.

The number of vehicles stranded reached 536, with 40 in Liloan port in Southern Leyte, 433 in Allen and San Isidro, Northern Samar, and others in Leyte.

At least seven ships were also stranded in various ports in the region, while flights have remained cancelled in Tacloban City, Catbalogan City, Calbayog City and Catarman in Northern Samar.

Several netizens, however, posted photos of houses damaged by the typhoon.

As of Tuesday morning, eight roads, mostly in Samar, were not passable to motorists due to flooding and landslide.

At least 70 towns around the region also have no electricity, Rentuaya said.

Rentuaya said they have 1,454 personnel on standby for any search and rescue efforts, while 139 personnel were deployed in evacuation areas.

A total of 51 PRO-Eastern Visayas personnel were also affected by the typhoon.