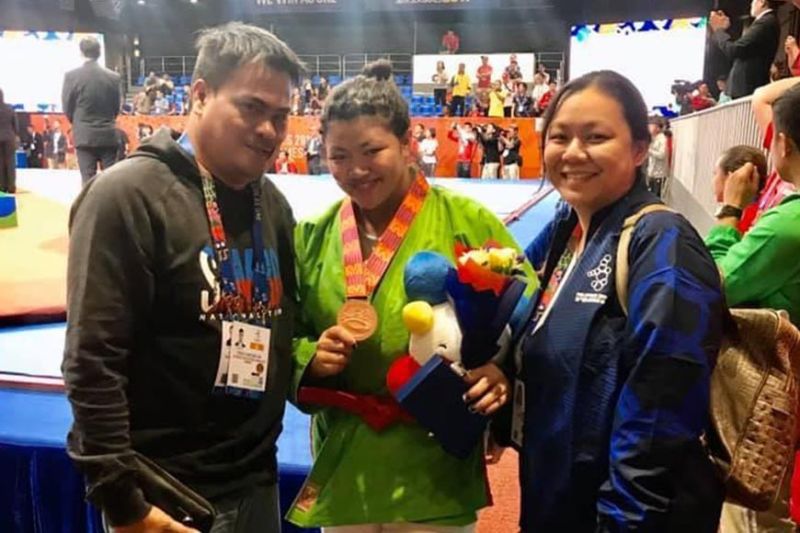 She placed third as Asian Indoors and Martial Arts Games 2017 champion Tran Thi Thanh Thuy of Vietnam defeated her, 3-0, in their opening encounter. Pattamaporn Tubkit of Thailand won the silver.

It was her first time to compete in kurash. She was supposed to see action in both kurash and sambo but her weight category was not included in the latter, thus, she had no choice but to just play in kurash. However, her training abroad in recent months was focused on sambo.

She also thanked the Filipinos who watched her play and cheered her on in every match.

“Very thankful din po ako sa mga nag-support sa akin and sa amin po dun sa venue kasi truly nakakapag-uplift po sila ng spirit naming athletes po and andun pa po buong family ko kasi ngayon nalang po ulit kami nakumpletong apat na nakapanood po sila ng laro (I’m also very thankful to those who supported us at the venue since they really uplifted our spirits. My entire family was there to support me and it seemed like the first time after a very long time that we were all together in a tournament),” she told Sun.Star Davao via Facebook yesterday.

She was pertaining to her parents Paolo and Janet, who are officials of Pilipinas Sambo, and her brother Chino, who will make his SEA Games sambo debut on December 5.

Mosqueda, 38, is a seasoned judoka who had competed four SEA Games and this year’s edition is her fifth.