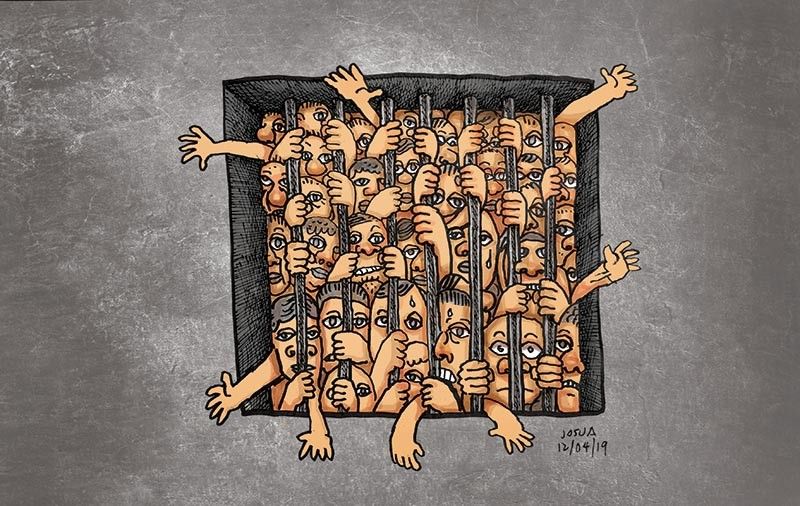 THE situation inside the Liloan Police Station detention cell is not an isolated case.

So what happens when it’s lights out? The station’s police chief, Major Danilo Colipano, has been forced to devise a shifting scheme where the inmates take turns sleeping. Those who have learned to sleep standing up are lucky, although this doesn’t address the problem.

Liloan sought the help of its neighbor Consolacion, but the latter’s municipal jail is also full beyond capacity.

According to Colipano, Liloan Mayor Christina Frasco had asked Gov. Gwendolyn Garcia if the Cebu Provincial Detention and Rehabilitation Center (CPDRC) could take some of the inmates but was turned down because the CPDRC also suffered the same problem.

In August 2018, the provincial jail was forced to shut its doors to new inmates.

This had the consent of all judges from the Regional Trial Courts. CPDRC Warden Reynaldo Valmoria had also asked prosecutors in the province to stop referring charged suspects to the facility.

Back then, Valmoria said they would only start accepting new prisoners if they could lessen the number of detainees to 2,000. The number has already dropped to 2,525 last July from the almost 3,000 last year.

The CPDRC was built to accommodate 1,600 inmates.

As of last September, the Bureau of Jail Management and Penology (BJMP) still recorded a congestion rate of 394 percent in 476 jails percent nationwide, even after 58,000 inmates with minor criminal offenses were released under the controversial Good Conduct Time Allowance law.

The Liloan Police Station has sought the assistance of the BJMP and awaits the latter’s reply, which is not exactly good news to its inmates who continue to languish in cramped conditions.

Then again, the police station didn’t ask them to commit crimes so they could be arrested and detained.