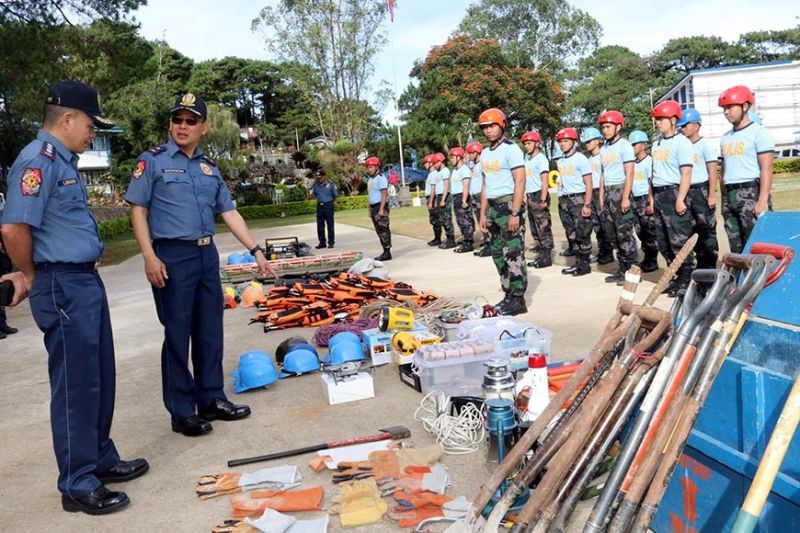 BAGUIO. Police Regional Office–Cordillera (PRO-COR) director Police Brigadier General Israel Ephraim Dickson inspects the search and rescue(SAR) equipment to be used by the members of the SAR team of PROCOR for immediate deployment for the possible affects Typhoon “Tisoy” in Baguio City and Benguet Province. (Photo by RPIO-CAR)

THE Police Regional Office Cordillera (PRO-COR) have placed on alert it’s search and rescue (SAR) teams in the region which will be deployed in areas where Typhoon “Tisoy” (international name Kammuri) may affect the region.

Police Brigadier General Israel Ephraim Dickson, PRO-COR director, personally led the inspection and accounting of SAR equipment and men saying this is part of the Philippine National Police’s (PNP’s) readiness to respond to the call for support once the need arises.

“Although based on the forecast of our weather bureau that we in the Cordillera will not directly be hit by the typhoon, we started to prepare even as early as December 1 by directing our other units in the region to audit search and rescue equipment which we also did here in the regional command to know what other needs need to be addressed so that if in case parts of our region maybe affected, our SAR police personnel can immediately respond,” Dickson said.

As of 11 a.m. of December 3, the Philippine Atmospheric, Geophysical and Astronomical Services Administration or Pagasa’s advisory for Typhoon Tisoy slightly weakened and was headed for the Batangas-Northern Oriental Mindoro area.

“Tisoy” made landfall over Marinduque at 8:30 a.m. bringing heavy rainfall between morning and late afternoon of Tuesday December 3 with frequent to continuous heavy to intense rains over Romblon, Marinduque, Mindoro Provinces, Calabarzon, Metro Manila, Bataan, Pampanga and Bulacan. Occasional to frequent heavy rains over Bicol Region and the rest of Central Luzon. Intermittent heavy rains over Aklan, Antique, Capiz, and the northern portions of Negros Provinces.

Between late afternoon of December 3 until the morning of December 4, frequent to continuous heavy (with isolated intense) rains on December 4 over Mindoro Provinces, Metro Manila, Central Luzon, Rizal, and Northern Quezon including Polillo Islands. Occasional heavy rains over Cagayan Valley, Cordillera Administrative Region, Marinduque, Romblon and the rest of Calabarzon. Intermittent heavy rains over Calamian Islands is to be expected.

“We cannot predict the forecast because it may change but just the same, we have to be ready so that we can immediately respond to any incident caused by Typhoon Tisoy,” Dickson reiterated.

PAGASA meanwhile advised residents in the aforementioned areas, especially those living in areas identified to be highly or very highly susceptible to flooding and rain-induced landslides, are advised to take appropriate actions, coordinate with local disaster risk reduction and management offices, and continue monitoring for updates, especially the thunderstorm or rainfall advisories and heavy rainfall warnings to be issued by Pagasa Regional Services Divisions.

“If ever there is a need for us to augment other regions affected by the typhoon, we will always be ready to support them not only in responding to any calamities but to any other support needing police services like augmentation for the maintenance of peace and order to prevent possible rally’s or other eventualities,” Dickson added.

PRO-COR is currently finishing the refurbishment of its soon to be covered court inside Camp Dangwa in La Trinidad which will serve as a temporary evacuation center area in the near future.