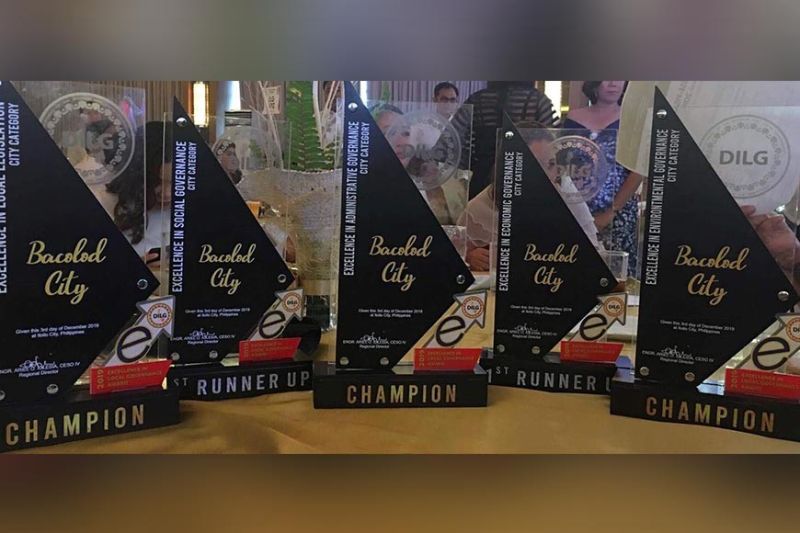 The “City of Smiles” was hailed as the overall “Best Performing LGU (Local Government Unit) – City Category in Western Visayas” at the awarding ceremony of the 2019 Excellence in Local Governance Awards (Excell) of the Department of the Interior and Local Government (DILG) Tuesday, December 3.

Bacolod Mayor Evelio Leonardia said, “This is gold rush! This is an exceptional year. The awards and recognitions bestowed upon our city have been most inspiring.”

“This proves the efficiency and responsiveness of government machinery and the vibrancy of the economy and the city in general. Indeed, when it rains, it pours. So we thank our vice mayor, councilors, department and office heads, and employees for making Bacolod what it is today,” the mayor added.

The qualifiers for the Excell awards were the five of 16 Western Visayas cities that won in the 2019 Seal of Good Governance (SGLG) Awards. These were Bacolod, Silay, Victorias, San Carlos, and Passi cities.

Leonardia and other city officials and heads could not come to the awarding ceremony for they had to attend to the heightened disaster preparedness and emergency response for Typhoon “Tisoy” (international name Kammuri). Pagasa had placed Bacolod City under Signal No. 2 early Tuesday.

Aside from the overall championship, Bacolod City was also awarded champion in three of the five special awards considered as “best practices” in five areas of governance:

For Local Legislation, the entry of the city was the ordinance authored by Councilor Dindo Ramos entitled “Ordinance granting the authority to all city traffic officers and enforcers to confiscate driver’s licenses of erring drivers upon the issuance of city citation tickets, and providing penalty for the refusal to comply thereof.” It is being implemented by the offices of the Sangguniang Panlungsod (SP), Bacolod Traffic Authority Office (BTAO), and City Planning and Development Office (CPDO).

The “Enhancement of Electronic Business Integrated System (eBis)” used by the Business Permits and Licensing Division and MITCS (Management Information Technology Computer Services) was the city’s entry for Administrative Governance.

As for Environmental Governance, Bacolod’s entry was the “Clean, Green and Well-Managed Solid Waste Management” system, as implemented by the ENRO, Department of Public Services, SP, and CPDO.

Aside from the SGLG and Excell awards, Bacolod was also a finalist at the Digital Governance Awards (eGov Awards) held at the Philippine International Convention Center in Manila last November 26.

The eGov Awards was presented by the Department of Information and Communications Technology (DICT), the National ICT Confederation of the Philippines (NICP), and the DILG.

In November, Bacolod was one of only 57 out of 145 cities in the country to receive the Seal of Good Local Governance (SGLG) Award for 2019. Leonardia called the SGLG award as the “highlight of all our highlights in 2019, adding that “this validates and legitimizes all our other awards and recognitions coming from other institutions.”

In October, Bacolod received a Special Citation in the 2019 Most Business-Friendly LGU Awards under City Level 1B category for cities outside Metro Manila.

In September, Bacolod was recognized as the Top Philippine Model City 2019 by The Manila Times, the oldest newspaper in the country. Aside from this major award, Bacolod received two special awards: Business-Friendly / High Returns, and Retirement Haven. (PR)