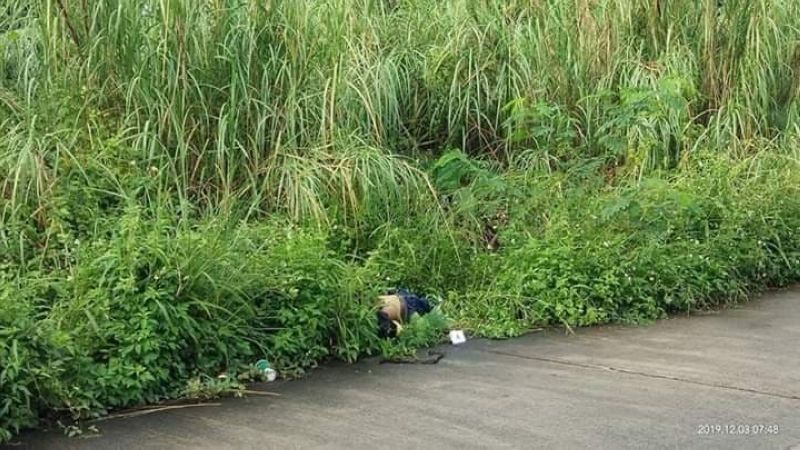 Police identified the fatality as Ontao Sacar, 66, a resident of Barangay Mandalagan.

Police Lieutenant Colonel Ariel Pico, spokesperson of Bacolod City Police Office (BCPO), said Sacar was found by a concerned citizen in a grassy area in Purok Kasanag around 6:25 a.m. His head was covered with duct tape with a placard on his neck that reads: “Wag Tularan Bigtime Pusher Ako.”

On the victim’s stomach, the words “I (a heart drawing) Drugs” with a smiley were written.

The victim, a former president of Muslim Association Maranao Tribe, sustained gunshot wounds on his head.

Investigation revealed that around 9:20 p.m. Monday, Sacar, who has a stall at 888 ChinaTown Mall, was walking along Burgos Street along with his common-law wife when three unidentified armed men wearing bonnets and onboard a red SUV stopped right beside them and forcibly abducted the victim and fled.

Pico said the victim was possibly killed in Barangay 8 or inside the car after he was abducted along Burgos Street.

He said they are looking into the victim's involvement in illegal drugs, personal grudge or investment scam business as possible motives in the killing.

Pico said Sacar was a former drug surrenderer. He surrendered to Police Station 6 in 2018.

Pico said a joint investigation will be conducted by personnel of Police Stations 2, 3, and 4 to identify and arrest the perpetrators.

“We will exert all our effort to give justice to the family of the victim and we are asking the cooperation of everybody to solve this incident,” he said.

Pico added that the incident was an isolated case and they are intensifying their visibility patrol to pre-empt the possible operation of lawless elements.