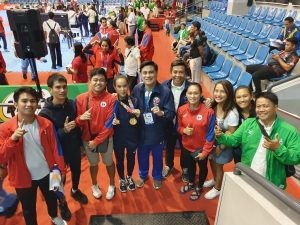 The PH eskrimadors, that gained full support from Senator Juan Miguel “Migz” Zubiri of Bukidnon, finished with a total gold haul of 14, eclipsing the 10-gold output of the ballroom dancers who fueled the Filipinos’ initial medal rush in the biennial meet.

The 41-year-old arnis trainer and referee Villegas and fellow veteran Danilo Jimenez of sepak takraw are the only officiating officials from Cagayan de Oro that qualified to spare quality time in helping to run the show in the 11-nation regional competition.

Mindanao’s Sheena del Monte, Jesfer Huquire and Jezebel Morcillo were among those who hauled off arnis gods, while Erlin Mae Busacay contributed a bronze, also in full contact category.