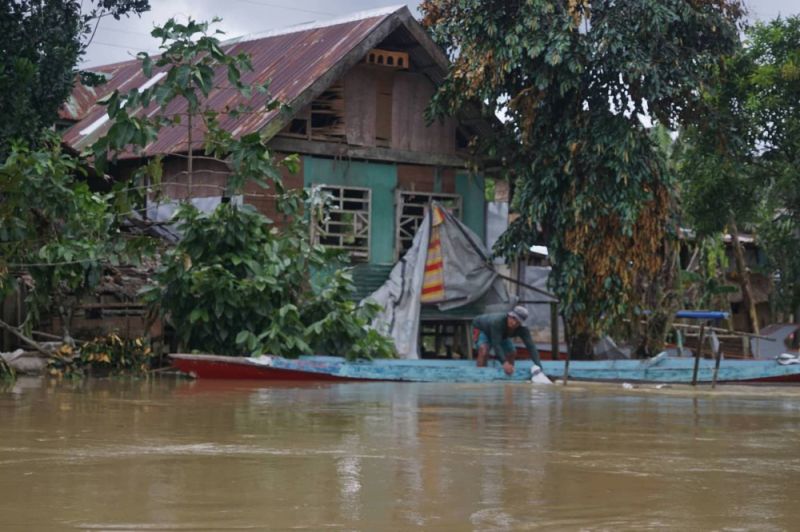 EASTERN SAMAR. Residential houses on the riverside of Barangay Concepcion, Arteche, Eastern Samar were flooded on Tuesday, December 3, a day after Typhoon Tisoy (Kammuri) made its landfall. (Photo courtesy of Alren Beronio)

THE Provincial Government of Northern Samar and Calbayog City in Samar have declared a state of calamity after their areas were heavily devastated by Typhoon Tisoy (Kammuri) on December 2, 2019.

As of 1 p.m. Wednesday, December 4, the typhoon affected 128,010 individuals or more than fifth of the population of Northern Samar, with the towns of Allen, Lapinig, Las Navas, Silvino Lobos and San Vicente still to submit their reports, according to the Northern Samar Provincial Information Office (PIO).

It also said that three brothers, ages 16, 10 and 4, were reported dead in Victoria town after a landslide hit Sitio Cag-Olango, Barangay Buenasuerte at the height of the typhoon.

The victims have yet to be properly identified.

But the total damage to agriculture “is way greater than these numbers,” said the Provincial Government in a statement Wednesday, December 4.

Northern Samar has 632,379 population, covering 569 barangays of its 24 municipalities.

As of Wednesday evening, December 4, all the 24 towns in Northern Samar have no electricity.

In Calbayog, Samar, the local council also approved a resolution declaring a state of calamity after the city incurred damage to housing, infrastructure, agriculture, and other properties.

Meanwhile, in Arteche, Eastern Samar, 4,592 families were affected by the typhoon, with 4,136 houses damaged and 28 destroyed.

Local government officials are appealing for immediate help to the victims by donating relief goods, hygiene kits, clothes, blankets and other basic necessities.

Flooded areas include 14 barangays in Northern Samar, with nine in San Antonio, three in Lope De Vega, one in Palapag, and one in Laoang.

The number of evacuation centers is 105, with 91 in Northern Samar and 14 in Samar.

Tisoy has so far claimed four lives in Eastern Visayas and injured 48 people.

Aside from Northern Samar, nine towns in Samar and one in Eastern Samar have no power supply.

Rentuaya said their police personnel have rescued 5,209 individuals during the typhoon, while no looting incidents were reported. (SunStar Philippines)