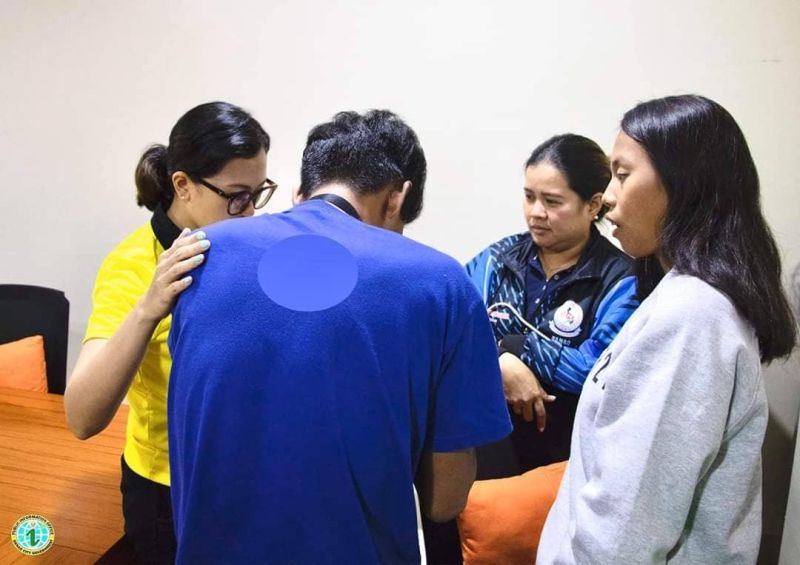 CEBU. The 21-year-old student (in blue shirt) who posted on Facebook that he was abducted by men on a white van was arrested by Danao police. (Photo from Danao City Government)

An apology from Brigs Granada Alvaro failed to appease officials of Danao City, whose peace and order condition came into public scrutiny this week after Alvaro's FB post about a kidnapping attempt.

In its Facebook post, the Danao City Government said Alvaro will be charged for violation of the law prohibiting alarms and scandals and the laws on cybercrime.

“Every action has a consequence,” said a post dated Tuesday, Dec. 3, 2019 on the Danao City Government’s official FB page.

The post stated that Alvaro was called to appear before Vice Mayor Mix Durano and members of the Sangguniang Panlungsod, Tuesday.

The meeting was also attended by the Philippine National Police (PNP), Danao City Public Information Office, City Social Welfare and Development Office and a representative from the man’s school.

The young man admitted to city officials that his claims of having been almost kidnapped by suspicious-looking persons on board a white van were not true.

Alvaro’s FB post, which had gone viral, has been deleted.

Danao City police chief Lt. Col. Maribel Getigan told SunStar they will proceed with the filing of charges against Alvaro within the week despite the latter’s apology.

The Regional Anti-Cybercrime Unit (Racu) will file appropriate charges against Alvaro based on the evidence gathered by the Danao City police, Getigan said.

They called on the public to refrain from bashing or bullying the young man as the matter is now in the hands of authorities.

Officials also urged everyone to verify FB posts from reliable sources before sharing them online.

In his post, Alvaro said a white van with a suspicious-looking man and woman inside was parked in Barangay Poblacion, Danao City.

He claimed that while waiting to ride a trisikad at around 7 p.m., the woman asked him for directions while the man tried to sell him perfume for only P100 or at least take a sniff of the fragrance to see if he would like it.

He also narrated that he heard a child calling out for help from inside the van which had huge boxes.

Upon police investigation, the story turned out to be a mere fabrication.

“Danao City has CCTV cameras in almost all areas, so immediately, the LGU (local government unit) and PNP checked on the report, and we saw that there was no van there at the time mentioned in his post. He, himself, also admitted that he just made up the story,” Getigan said in Cebuano.

Police Lt. Col. Randy Korret, CCPO deputy director for operations, said there was no information received by any of the city’s 11 police precincts regarding the alleged incident.

He added that regular checkpoints are conducted around the city while police personnel are also visible at all times to prevent crime.

A portion of PD 90 reads: “Any person who shall offer, publish, distribute, circulate and spread rumors, false news and information and gossip, or cause the publication, distribution, circulation or spreading of the same, which cause or tend to cause panic, divisive effects among the people, discredit of or distrust for the duly-constituted authorities, undermine the stability of the Government and the objectives of the New Society, endanger the public order, or cause damage to the interest or credit of the State shall, upon conviction, be punished by prision correccional.”

The law further states that absolute perpetual disqualification from holding any public office will be imposed as penalty if the involved individual or offender is a government official or employee.