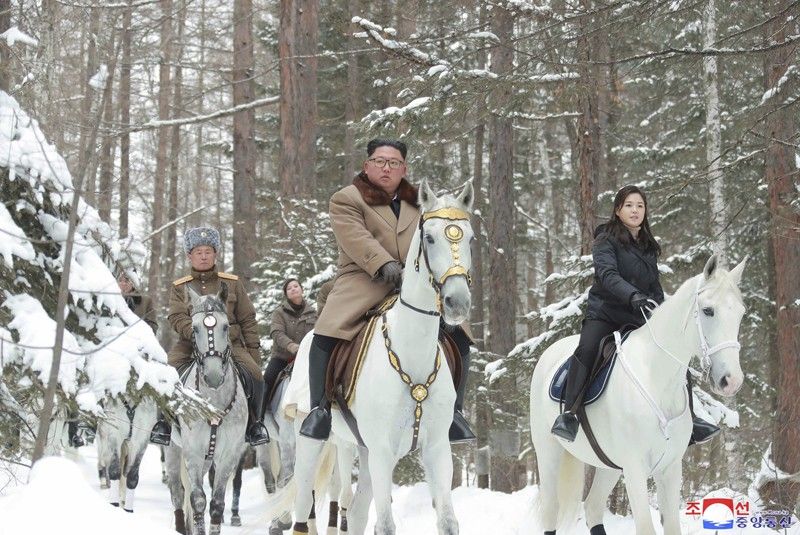 NORTH KOREA. This undated photo provided on Wednesday, December 4, 2019, by the North Korean government shows North Korean leader Kim Jong Un (center) with his wife Ri Sol Ju (right) riding on white horse during his visit to Mount Paektu, North Korea. North Korea said leader Kim has taken a second ride on a white horse to a sacred mountain in less than two months. Independent journalists were not given access to cover the event depicted in this image distributed by the North Korean government. The content of this image is as provided and cannot be independently verified. Korean language watermark on image as provided by source reads: "KCNA" which is the abbreviation for Korean Central News Agency. (AP)

SEOUL, South Korea -- North Korean leader Kim Jong Un rode a white horse up a sacred mountain on his second symbolic visit in less than two months, state media reported Wednesday, December 4, as his country is threatening provocation if the United States (U.S.) refuses to make concessions in nuclear diplomacy by the end of 2019.

The Korean Central News Agency (KCNA) released many photos showing Kim taking a horse riding to snow-covered Mount Paektu along with his wife and other top lieutenants, all on white horses. Kim also climbed the mountain, the highest peak on the Korean Peninsula, on horseback in mid-October.

Mount Paektu and white horses are symbols associated with the Kim family's dynastic rule. Kim has made previous visits there before making major decisions.

Kim said that “we should always live and work in the offensive spirit of Paektu,” according to KCNA. “The imperialists and class enemies make a more frantic attempt to undermine the ideological, revolutionary and class positions of our party.”

On Monday, December 2, Kim visited Samjiyon county at the foot of Mount Paektu to attend a ceremony marking the completion of work that has transformed the town to “an epitome of modern civilization,” KCNA said.

It said the town has a museum on the Kim family, a ski slope, cultural centers, a school, a hospital and factories.

Samjiyon was one of main construction projects that Kim launched in an effort to improve his people’s livelihoods and strengthen his rule at home. The construction spree has also been seen as a demonstration of his power in the face of international sanctions designed to squeeze his economy and get him to give up his nuclear program.

The latest mountain trip comes as a year-end deadline set by Kim for Washington to come up with new proposals to salvage nuclear diplomacy is approaching. The negotiations remain stalled for months, with North Korea trying to win major sanctions relief and outside security assurances in return for partial denuclearization steps.

The North’s Foreign Ministry warned Tuesday, December 3, it’s entirely up to the United States to choose what “Christmas gift” it gets from the North.

North Korean officials have previously said whether North Korea lifts its moratorium on long-range missile and nuclear tests depends on what actions the U.S. takes.

Last week, North Korea test-fired projectiles from what it called a “super-large” multiple rocket launcher that South Korea’s military said landed in the waters off the Norths’ east coast.

KCNA said Wednesday the ruling Workers’ Party will hold a central committee meeting in late December to discuss unspecified “crucial issues” in line with “the changed situation at home and abroad.” It’s unclear what specific agendas are at stake.

Many experts said the United States is unlikely to make new proposals that would satisfy North Korea.

President Donald Trump on Tuesday urged Kim to follow through on what he described as a promise to denuclearize the North. Trump and Kim have met three times since North Korea entered nuclear negotiations in 2018.

“My relationship with Kim Jong Un is really good, but that doesn’t mean he won’t abide by the agreements ... he said he will denuclearize,” Trump said during a visit to London.

Trump also revived a nickname he had previously given Kim when he traded crude insults and threats of destruction during a provocative run in North Korean nuclear and missile tests in 2017.