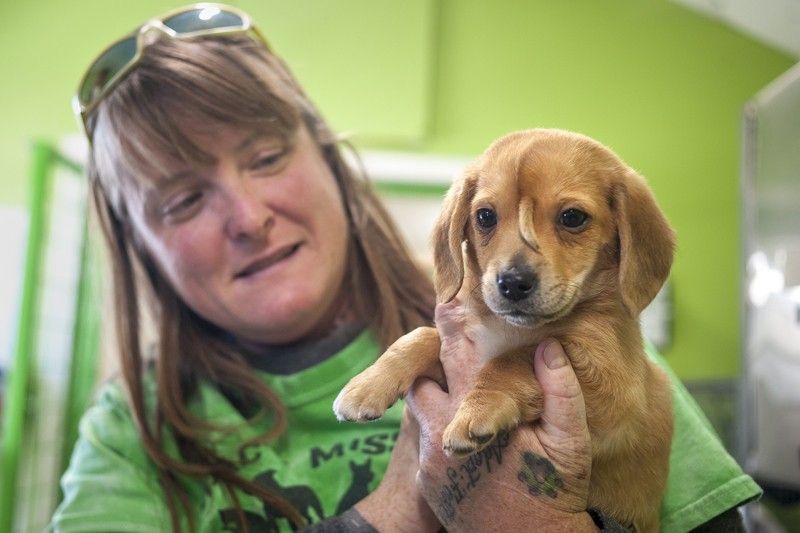 MISSOURI. In this November 13, 2019, file photo Mac's Mission animal rescue founder Rochelle Steffen holds a 10-week-old golden retriever puppy with a small tail growing between his eyes, in Jackson, Missori. The dog, named Narwhal the Little Magical Furry Unicorn, that drew international attention because of a tail-like growth on his face, and also drew some unwelcome attention, including death threats, will remain with Steffen, the founder of a group that rescued him. (AP)

CAPE GIRARDEAU, Missouri -- A dog who was dubbed the unicorn puppy because of a tail-like growth between his eyes will remain with the founder of a Missouri rescue group, despite more than 300 offers to adopt him.

The beagle-mix puppy, named Narwhal the Little Magical Furry Unicorn, was rescued in November 2019 by Mac’s Mission in southeast Missouri. He drew international attention when his picture hit social media, prompting all the adoption offers but also some negative attention, including death threats, said Rochelle Steffen, founder of the Mac’s Mission in Jackson.

Those two factors -- plus the dog’s winning personality -- convinced Steffen to reverse an earlier decision to find a new home for Narwhal, Steffen told The Southeast Missourian.

She said her tiny rescue could not properly vet the 300 adoption applicants and she was concerned by “stupid, ugly comments [online] about this sweet little puppy.”

People have shown up at the rescue in Jackson because of the dog, prompting security measures and meetings “by appointment only,” she said. Narwhal is watched at all times by Steffen and trusted volunteers.

Steffen said she wanted to keep the dog safe and was concerned he could be exploited by someone without his best interests at heart.

“If somebody is going to make money off of him, I would love to see it go toward the rescue, and save thousands more dogs,” she said.

People have made “giant” offers to buy him, Steffen said. “But he’s not for sale.”

And the dog’s cute personality made it difficult to consider giving him to someone else, she said.

“It’s not just a decision from me,” Steffen said. “The whole rescue cannot fathom him leaving. We all fell in love with him.”

Mac’s Mission is currently involved in a court case involving the sale of a previously adopted dog, which taught Steffen that the organization loses control over an animal’s fate once it is adopted. And the mission’s former treasurer, Elizabeth Hann, is awaiting trial on charges that she stole $120,000 from the organization, which specializes in caring for animals with special needs.

“We have had a rough couple of years here,” Steffen said of Mac’s Mission. “Lots of loss, lots of hurt.” And Mac, the mission’s current “spokesdog”, turns 9 in January 2020.

She said she wasn’t sure what was going to happen until Narwhal came along, saying he is “absolutely, exactly what we needed.” She said the dog will be a spokesdog for a “Different is awesome” campaign and the long-term plan is to train him as a therapy dog.

For now, Steffen is concentrating on letting him grow, and getting him fully vaccinated and socialized. (AP)