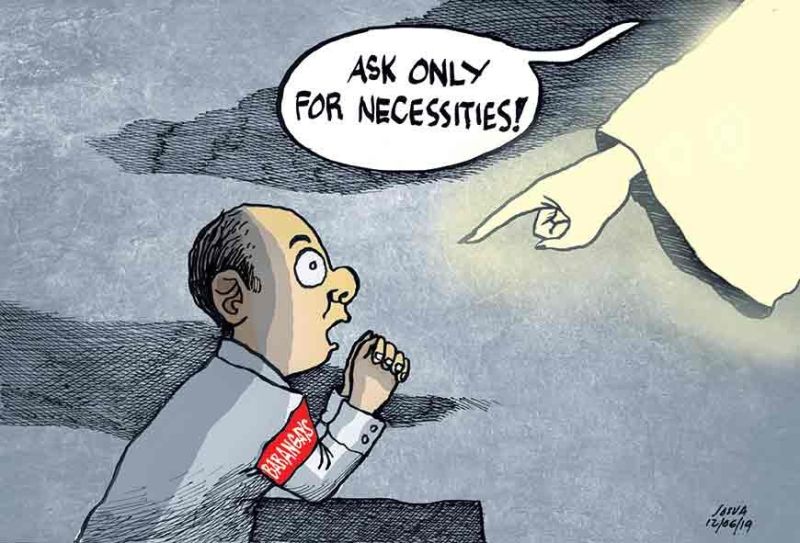 THE Cebu Provincial Government is coming out with guidelines for barangays in the component towns and cities on the matter of financial assistance.

The funding requests coming from the villages, the Provincial Government found, aren’t pegged on what should be basic and necessary for citizens.

“I think these are more of luxuries,” said Gov. Gwendolyn Garcia. The items enlisted in the requests aren’t really what the villages need to efficiently serve their constituents.

Through their respective district board members, a good number of barangays have been referring requests for uniforms, tents, monobloc chairs, airconditioning units, basketball rims, printers, closed-circuit television units, medals and trophies, among others.

This is a welcome move by the Capitol. Not only will the guidelines lead to more frugal spending of taypayers money, but to changing a rather diminutive, laid-back culture in the barangays.

How often do we witness misplaced priorities in the barangays? An accounting of their expenses would show you expenditures that don’t really have a lasting impact on the lives of its citizens.

During village fiestas, for instance, so much money is spent in the organizing of amusement activities and sports leagues. These are the reasons for requests on uniforms, sports equipment, tents, monobloc chairs, basketball rims, medals and trophies. We have yet to know if these activities’ objectives were clearly defined and if they were met. A sports program, for instance, is meant to develop health and wellness as well as helping the youth stay out of illegal drugs. But these sports programs exist only within the period of fiestas and oftentimes as summer leagues. But beauty contests? They could be a different matter altogether.

So, perhaps, the Capitol may also look at these guidelines not merely as a matter of economy, but as a tool to change mindsets in the constituent barangays. That there must be better, more imaginative ways to spend government money, no matter how small the allocation may be in the grassroots.

Capitol can take the lead in instilling a culture of innovation in the villages. It has all the resources to make that possible.