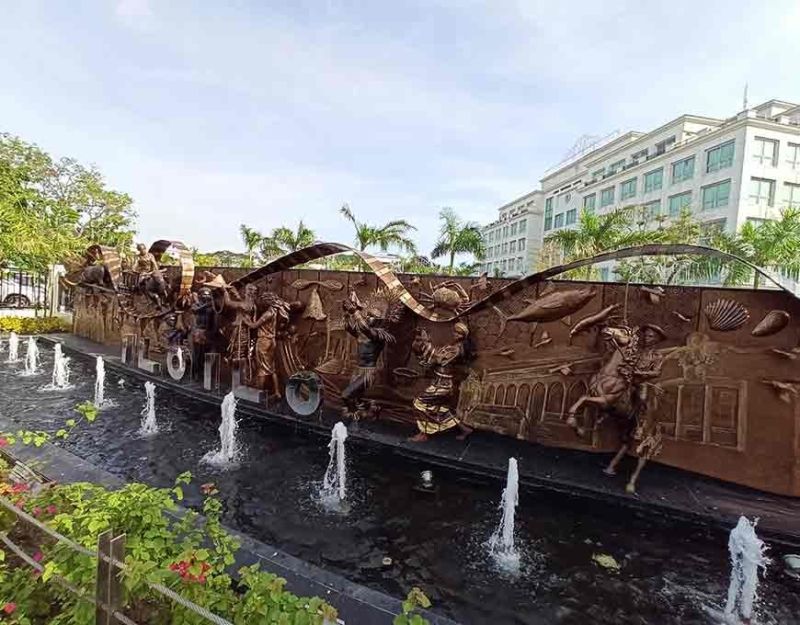 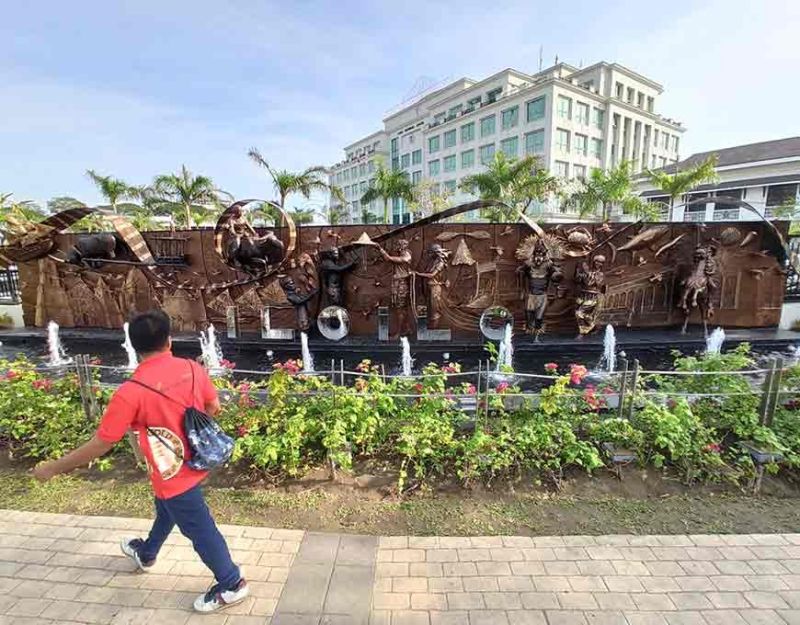 THERE is a new tourist spot in Iloilo -- a mural that shows the narrative of Ilonggo culture and heritage found in northern, central and southern parts of the province.

The mural, which was set up in front of the Iloilo Provincial Capitol, was inaugurated Monday, December 2, 2019. It shows facets of Ilonggo's daily lives, history, food, and crafts found in various municipalities of the province.

At the center of the mural is an image of "Bayluhay," the Barter of Panay by Marikudo to the Datus from Borneo. This symbolizes the heart of the artwork, the origin of lloilo and the llonggo people.

Slightly off-center to the right is the Golden Burial Mask of Oton. This artifact is evidence of a flourishing civilization of pre-colonial Iloilo.

It also features a man with a peculiar headdress. He is a Dinagyang warrior and is holding up an image of Santo Nino, kneeling down to show his devotion and respect to the image of Child Jesus.

Beside the warrior is a woman called "Binukot," dressed in her traditional courtship attire and with jewelry. She is said to be the "Keeper" and "Chanter" of Ilonggo epics and oral traditions. It is once considered a great honor and privilege to have a "Binukot" or hidden woman in the family.

Another feature is a man riding a horse. He is General Martin Teofilo Delgado, a brave general from Santa Barbara town of Iloilo. He fought the Spaniards and led the first declaration of independence of Iloilo from Spain. He symbolizes hope and courage of every Ilonggo amid adversity.

In the background, slightly right from the center, is a bandstand. This structure can be found in plazas of various municipalities of lloilo. It is used for public address, performance arts and entertainment. This structure embodies the love of Ilonggo for music, dance and the performing arts.

Next to the bandstand are varied clay pots and bowls. Pottery, being one of Ilonggo's handicrafts, is used for preparing and serving delicacies unique to Iloilo.

Different seafood such as crabs, fish, seashells and prawns are also displayed to signify the rich seas and flourishing fishing industry in the northern and southern part of the province.

To the far right is the Gabaldon Building of the Iloilo National High School. This school building symbolizes the importance of education for Ilonggos. They value education as powerful tool for progress and global competitiveness.

Left side near the center is a "Paraw" riding the waves. Paraw Regatta is a yearly festival held February or March where Ilonggos decorate their boats with beautiful sails made by Ilonggo artists. These boats are then taken to the sea for a race. The Paraw embodies the seafaring culture and adventurous nature of the llonggos.

The waves symbolize beautiful beaches and islands found in coastal towns of lloilo. On the left of Paraw is a structure called "Bantayan" or watchtower found in Guimbal town.

Bantayan is used as a lookout for the coming Moro pirates that frequently pillage the area.

After the watchtower, to the right, is the mortuary chapel of the "Campo Santo" catholic cemetery of San Joaquin in southern Iloilo. Styled in Spanish baroque architecture, it was declared a National Cultural Treasure in December 2015. This kind of cemetery shows the high respect of Ilonggos and their way of honoring their departed loved ones.

The carabaos or water buffalo pictured being ridden by a farmer is a common sight in rural parts of Iloilo. This animal is a trusty helper of farmers in tilling soil and other agricultural work. The other carabao is pulling a "Karosa" or bamboo sled. This Karosa is used for hauling of products and transport for farmers. The carabao is a symbol of the hard work of the Ilonggo farmers and of the province having a plenty harvest of various crops.

"Tulabong" or crane sits atop of Karosa. These are migratory birds commonly seen in rural areas and farmlands across the Iloilo province.

The galleon ship at far right of the mural symbolizes the flourishing of trade and commerce of lloilo from the past up to the present.

Another feature is the "hablon," a weaved cloth with vibrant patterns and colors. This is one of the primary crafts of lloilo, as hablon weavers are scattered all over the province, each with their own style.

The hablon ribbons all over the mural symbolize the culmination of the past and present, the culture and heritage, and all these aspects are weaved in the consciousness of every Ilonggos.

Just like the hablon, Iloilo has a colorful history and culture and just like the fibers of the hablon, each Ilonggo is a significant thread that comprises the place called Iloilo.

The sculptural work was undertaken by spouses Joseph Carl Albert E. Pampliega and Margarette Albacete Pampliega, who are both from Maasin, Iloilo. (Leo Solinap/With PR)