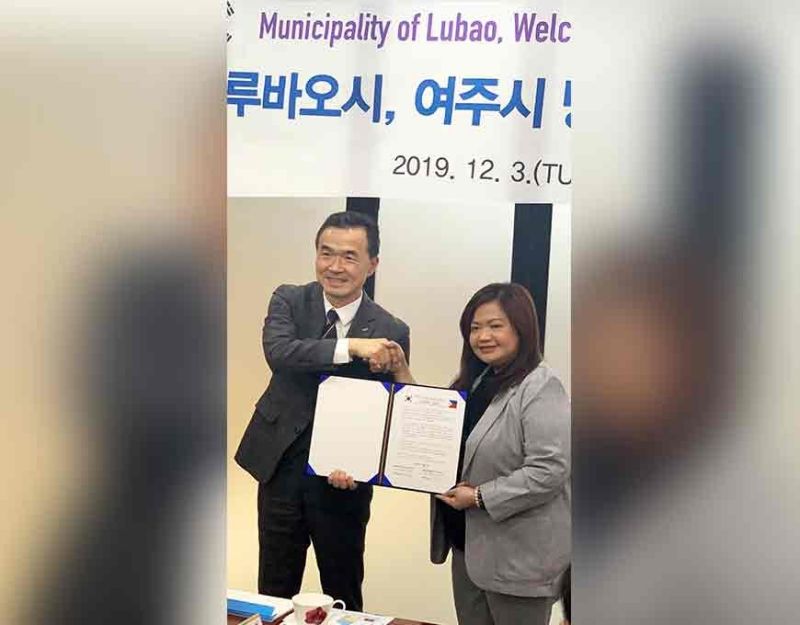 THE local government unit of Lubao, led by Mayor Esmeralda Pineda Thursday, December 5, signed a memorandum of understanding with the City of Yeoju in South Korea for the hiring of farmers in the Korean peninsula.

The agreement will give farm workers from Lubao town the chance to land jobs in South Korea soon.

Yeoju, located about 60 kilometers southeast of Seoul, sits along the Han River, the longest river in South Korea. It is one of the highly-agricultural areas of Gyeonggi province and top producers of rice, sweet potatoes, and yellow melons.

Jongpil Choi, ambassador for international projects of Lubao and the Provincial Government of Pampanga, brokered the agreement until the signing of the understanding on December 3 between Mayor Pineda and Mayor Hang Jin Lee in Yeoju city.

Mayor Pineda said that since 2005, the Philippines has been deploying thousands of workers to industrial companies South Korea.

“But we have other workers who belong to other industries like food services and agriculture. We hope to send them, too, to South Korea,” the lady mayor said.

“South Korea and the Philippines have been in good working relation for a long time and our visit only intends to strengthen the ties between our people,” she told Yeoju officials prior to the signing ceremonies.

Under the agreement, both local governments commit to draft a framework of cooperation such as employment, educational and cultural exchanges, among others.

The Yeoju leaders are also interested in Lubao’s local products and in exploring investment opportunities in the Philippines. (JTD)