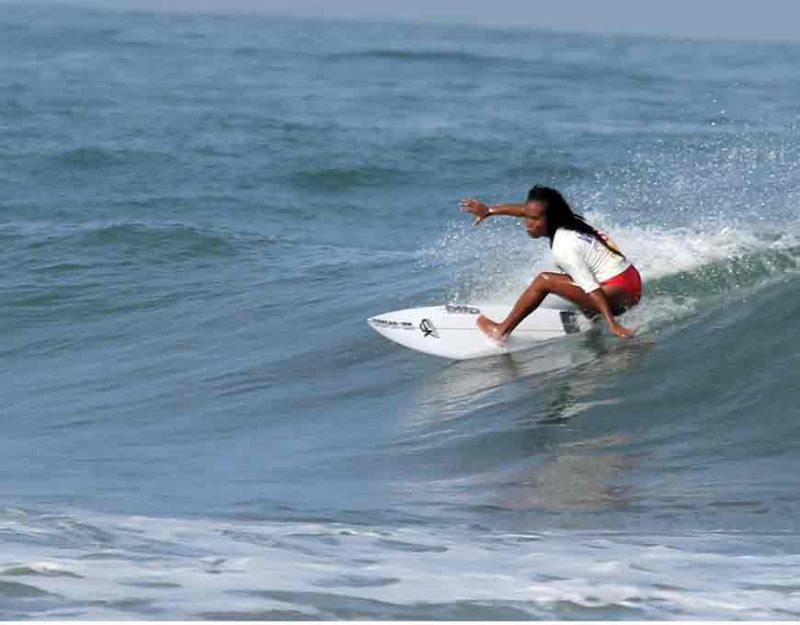 LA UNION. Daisy Valdez of the Philippines rides with the wave during the qualification round of the women’s short board open category in the ongoing 30th Southeast Asian Games in San Juan, La Union. (Photo by Roderick Osis)

With competition already in full swing in San Juan, La Union, coach Luke Landrigan hopes the squad can at least bring home two golds in the surfing competition which is being played for the first time in the biennial meet.

“We have been training for the past three weeks here in La Union and malaking bagay ‘yung homecourt advantage,” Landrigan said.

But Landrigan said despite the homecourt advantage, Indonesia remains their biggest rival in the competition.

Four golds, four silvers, and eight bronze medals are at stake during the competition by surfers coming from Myanmar, Thailand, Malaysia, Singapore, aside from Indonesia and host country the Philippines.

“Our strongest opponent is the Philippines because they know the beach break, home break, point break and that’s really an advantage,” added Noventin.

As of this writing, the Philippines and Indonesia are currently battling it out for the top spot in the ongoing qualifications round.

The PH surfing team is composed by Rogelio Esquivel, Roger Casogay, John Mark Tokong and Edito Alcala for the men’s side while Daisy Valdez, Bianca Nelvy and Jevy Mae Agudo competes in the distaff side.

Esquivel, who is bannering the men’s swuad hoopes to continue his outstanding performance in the qualifying and win a gold medal for the country.