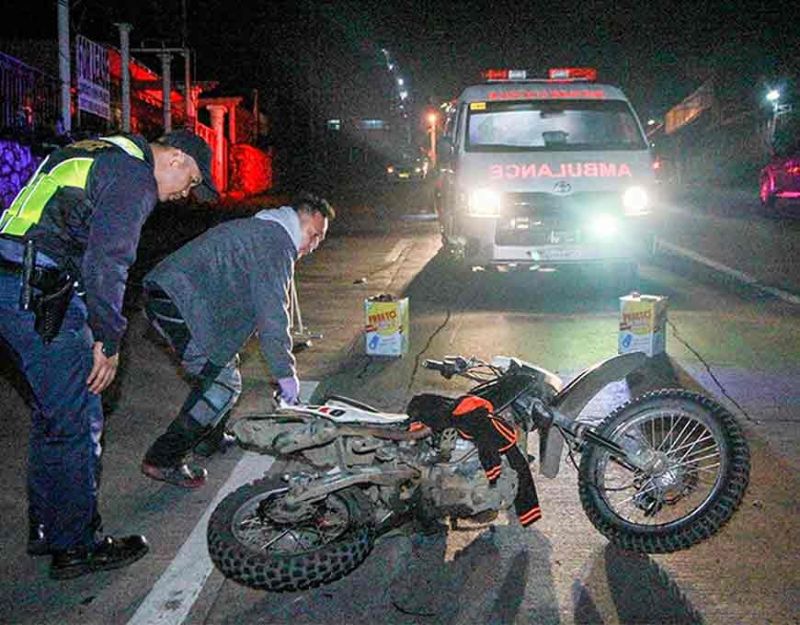 BAGUIO. The Emergency Response Service crew tends to one of the injured motorcycle riders during a vehicular road crash which transpired along Buhagan (Bokawkan) Road on September this year. (Photo by Jean Nicole Cortes)

THERE are 6,078 road crash incidents in Benguet out of the 13,535 cases recorded in Cordillera region in the last three years.

In Benguet province alone road crash deaths recorded 97 cases, 1,947 injuries and 4,034 damaged properties this was followed by Baguio City with 20 deaths, 639 injured and 3,804 damage to property.

Police Regional Office Cordillera operations officer Colonel Homer Penecilla discussed most of the drivers involved in road crash are drivers ages 36 years old and above with 9,778 recorded cases followed by 18 to 35 years old with 9,002 and 507 cases involving minors.

The road crash incidents were attributed to driver error as the main cause with a total of 12,090 followed by mechanical defect with 776, and 669 road condition.

Data shows 17,040 of the drivers involved in road crash were with licenses and 6,210 without while 1,267 motorycle riders recorded without helmet where mainly noted in Kalinga with 668, followed by Ifugao with 326 and Abra with 109.

With the drivers error considered as the highest cause of road crashes, the police office recommended for the Land Transportation Office (LTO)to intensify its screening process on applicants for driver’s license and enforcement of the anti-distracted driving act, driving under the influence of alcohol, dangerous drugs and similar substances and speeding.

For LTO and the Philippine National Police to implement campaign against colorum and overloading of vehicles and for the Department of Public Works and Highways to identify prone areas of road crashes, improve roads and infrastructures and install visible road signs, precautionary measures and traffic signages.

According to World Health Organization about 11,000 people die in the roads due to road crashes every year while 90 percent of the incidents occur in low to middle income countries.

“On the law enforcement side the best thing we could do is to provide police presence during rush hours, especially in accident prone areas but we cannot sustain it in 24/7 basis that is why we need the help of other stakeholders.”