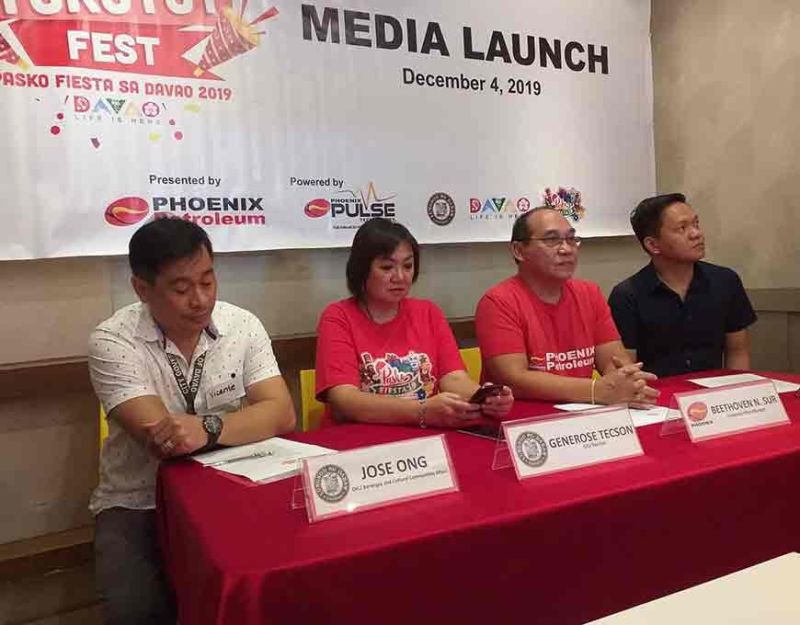 MORE surprises will be in store for Dabawenyos during the New Year’s countdown as Phoenix Petroleum once again sponsors this year’s Torotot Festival, an event created in support of Davao City’s advocacy of celebrating the New Year in a safe, cost-efficient, and enjoyable manner.

Aside from the usual Giant Torotot, the Torotot-Inspired Costume, and the Dance contests, this year’s festival will give the audience a chance to win as well through a raffle draw which will be held all in the same venue at Rizal Park grounds to welcome the new year with a bang.

Around P100,000 worth of prizes are up for grabs during the raffle draw, which according to Beethoven N. Sur, Phoenix Corporate Affairs manager, during the media launch of the Torotot Festival at Dencio’s Kamayan in SM Lanang, P20,000 will be in fuel cards form with each card worth P500. The winners of which can gas up to any Phoenix gasoline stations with either diesel, special or ordinary gasoline.

The other P80,000 will be in items form, such as rice cooker, microwave oven and flat iron.

“Other than that all subsidiaries of Phoenix will also contribute kung ano yung Christmas giveaways namin, such as payong and bags,” Sur said referring to additional prizes which anyone from the audience can win.

Meanwhile, Sur also announced that prizes for this years’ contests have been increased from the previous P50,000 to P60,000 for each 1st placer of the competition. Second placers will receive P30,000, and P20,000 for the third placers. There will also be consolation prizes for each contests worth P5,000.

All barangays are invited to participate in the contests as these are open to all residents of Davao City barangays.

Interested participants can get entry forms at the City Tourism Operations Office on the 2nd flood of Pasalubong Center, Palma Gil Street, (near People’s Park), and Gmall Toril, Ponciano, and Lanang Phoenix stations.

The form can also be downloaded at Phoenix Petroleum’s website www.phoenixfuels.ph.

Deadline for submission of entry forms and other requirements to the City Tourism Operations Office is on December 23, 2019. (With PR)