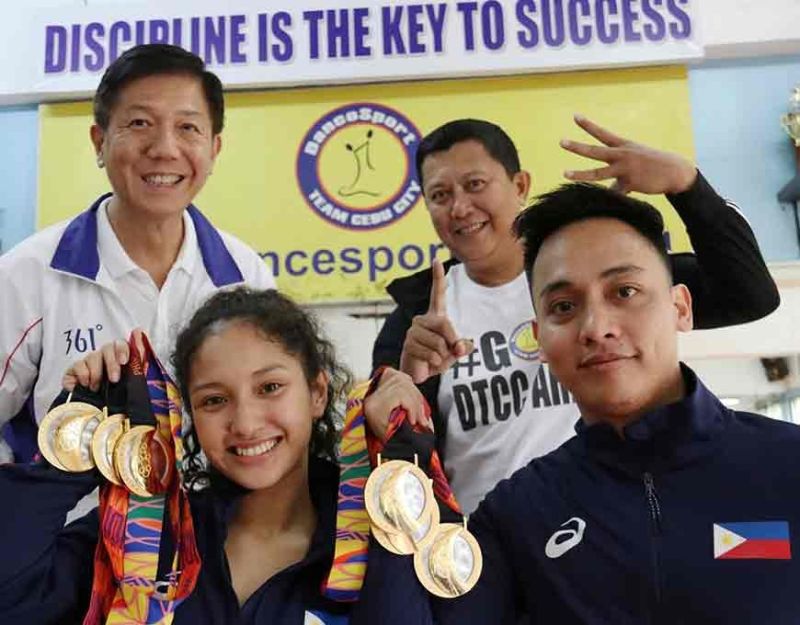 PROPER mindset and winning spirit. These are two of the values that made a couple of homegrown Cebuano talents wow the crowd with their dancesport skills and survive life’s tough challenges.

“Our experience was unforgettable and priceless because it was the first time we represented the Philippines and we are pure Cebuanos,” Cañeda said in a mix of Cebuano and English.

The two are products of the grassroots program of the Dancesport Academy in Cebu. They discovered the sport by accident in 2006.

“When I was nine, I used to go swimming at the pool right across the studio. So I always passed by it on my way to the pool. My grandmother liked watching the children dance and inquired how to attend. It just so happened that it was approaching summer and they were offering the grassroots program,” Cañedo said in Cebuano.

She said her interest in the sport turned into appreciation when she learned the kind of discipline it required.

“What makes it unique from other dances is we are dancing as a pair. If one of us doesn’t cooperate, it affects the whole dance. We need to compromise to make the dance as a whole,” she said in a mix of Cebuano and English.

Aunzo was 14 and an out-of-school youth when he discovered dancesport.

“My first impression of dancesport was that it was only for gays because the dancers move so gracefully. I played basketball as a kid. But later on, I discovered that I was wrong,” he said in a mix of Cebuano and English.

Meanwhile, he said he still could not believe they won three gold medals, considering the challenges they had to face before the SEA Games.

“I was devastated last year. I suffered an anterior cruciate ligament injury and had to undergo surgery. I was sidelined for around six months,” he said in Cebuano.

As a result, Aunzo was removed from the Philippine National Team, said Edward Hayco, Cebu City Sports Commission chairman and co-founder of dancesport in Cebu City.

But that didn’t stop Aunzo from recovering and returning to his old form, saying he was grateful to his partner for not abandoning him.

Aunzo learned to fight at an early age. He used to scavenge in one of the rivers in Barangay Tejero in Cebu City to help support his family.

As the youngest of five siblings, he admitted that life wasn’t easy, especially when his father died when he was 10.

He said dancesport became his outlet and ticket to school as their coach Crisaldo “Loloy” Rendon helped him find a scholarship in one of the private universities in Cebu City.

Rendon said he saw the potential of Aunzo and Cañedo early on.

“Knowing them since they started, you could see the quality they possess. May it be the technical capacity or mental capacity, but you need a mixture of everything. Good dancers do not mean you can be on top. Determination can surpass ability,” he said in a mix of Cebuano and English.

Cañedo and Aunzo dedicated their success to their family, coaches and teammates. They’ve also volunteered to teach for the grassroots program.

“We’re at a stage that we should rest, but we still entertain and teach children at the grassroots level. It is our way of paying back and acknowledging where we came from. No matter how many gold medals we achieve in a competition, we always find time for the children,” Aunzo said in Cebuano. (WBS)